Peter Wooding, 77, hits the local YMCA almost daily in hopes of slowing the progression of his Alzheimer’s disease
Tony Luong for TIME
By Alice Park

After he was diagnosed with Alzheimer’s disease in 2016, Peter Wooding says he and his wife JoAnn decided they wanted to be “part of the solution” in finding the first effective treatment for the neurodegenerative disease. He volunteered to be part of a trial for a promising new drug called aducanumab. While there is still no effective treatment for Alzheimer’s, in early studies aducanumab melted away the amyloid protein plaques that are the hallmark of the brain disorder. And people taking the drug showed improvements in some of their thinking skills.

But last week, the drug’s developers, Biogen and Esai, decided to halt two trials involving aducanumab when an analysis showed that in a larger group of people with mild to moderate disease, the drug didn’t seem to be working to improve people’s memory or cognitive impairments.

“It’s sort of like having the rug pulled out from under you,” says Wooding of the news. TIME has followed Wooding’s journey as a volunteer in the trial from the day he was accepted into the study. Wooding, a retired industrial and interior designer, is among nearly 3,000 people who participated in the trials and learned to their surprise that the studies had abruptly ended.

The failure is the latest in a string of let-downs involving drugs that target amyloid, leading experts to question whether future treatment strategies should focus so heavily on amyloid plaques. Therapies that target some of the other proteins involved in the disease are ongoing, but until recently, the predominance of amyloid in the brains of people affected by Alzheimer’s has led drugmakers to focus on that protein in particular.

Early studies of aducanumab showed the drug actually removed some of the amyloid plaques in people like Wooding with mild to moderate Alzheimer’s disease, so researchers were hopeful that it could lead to improvements in Alzheimer’s symptoms involving memory, orientation, judgment, performance of daily activities and social interaction. But while Biogen and Esai will perform a more detailed analysis of the data in coming months, the companies said in a statement that the first look at the data showed little difference in cognitive tests between people receiving the drug and people on placebo.

“I am very disappointed, majorly disappointed,” says Dr. Stephen Salloway, director of neurology and the memory and aging program at Butler Hospital in Providence, Rhode Island, where Wooding and nearly four dozen others were participating in the studies. “I haven’t really seen the data yet but apparently the chance of benefit wasn’t sufficient to continue to trials.”

On Thursday, after Biogen and and Esai made the announcement, Salloway and his team at Butler rushed to notify the participants that the trial had been stopped, including two people who were scheduled to come in for infusions that day.

Wooding received 18 months of monthly infusions and still doesn’t know whether he got the drug or the placebo. After an 18-month trial, the study allowed all participants to receive the drug, so Wooding has done so every month since last summer. His next scheduled infusion was in two weeks, but that will no longer happen.

“It’s a blow; I’m just kind of shocked,” says JoAnn, his wife and caregiver. “Because the last we heard, they were going to get FDA [Food and Drug Administration] approval, and then this. Then it’s over.” Based on its promising early stage results, the FDA had granted aducanumab Fast Track designation, which means the agency would have given the drug priority review, since it would have been the first to treat Alzheimer’s disease and not just its symptoms.

While Alzheimer’s experts wait for a more detailed analysis of the results, which the companies say won’t be released for months, the failure of aducanumab could have broader implications for how researchers and drug developers choose future treatment strategies. The two trials, called EMERGE and ENGAGE, were unique because they incorporated brain scans for amyloid. Because the technology for these PET scans is relatively new, previous studies could not actually guarantee that people who showed signs of dementia and memory problems actually had amyloid buildup in their brains, and recent research suggests that as many as 30% of people who were diagnosed with Alzheimer’s based on their memory loss in those early studies may not have had amyloid deposits. Further analysis of the data from ENGAGE and EMERGE will allow researchers to better understand how amyloid affects Alzheimer’s disease, because they will be able to see how much amyloid was present in people’s brains, and correlate that more confidently to their performance on cognitive tests.

If the data show that the aducanumab did what it was supposed to do and reduced amyloid burden in the brain, but still did not affect people’s overall cognition, then that would call into question whether amyloid should remain such a dominant focus for treatment strategies. “It’s not that amyloid doesn’t play a role in Alzheimer’s — obviously it plays a role,” says Dr. Ronald Petersen, director of the Mayo Clinic Alzheimer’s Disease Research Center. “But is amyloid a treatable, and druggable, target? That’s the more difficult question.”

So far, the track record for amyloid-based treatments is dismal. Various efforts to fashion antibodies against different parts of the protein — including aducanumab, which was derived from compounds found in healthy older people who were thought to have escaped significant buildup of the protein — have failed to make a dent in the progression of the disease. Gamma secretase inhibitors, drugs designed to inhibit the process that creates the troublesome amyloid protein fragment, haven’t proven effective in trials, and most of their cousin compounds, beta secretase inhibitors, have also been underwhelming. (Biogen and Esai continue to study their beta secretase inhibitor drug.)

“All antibody-based approaches for amyloid have failed,” says Dr. Howard Fillit, chief science officer and founding executive director of the Alzheimer’s Drug Discovery Foundation. “You can’t say that big pharma and biotech didn’t give [amyloid strategies] a go; they took a lot of risk. At some point you’ve got to say this doesn’t look so good any more. And here we have evidence that the drug worked in its mechanism of action of removing amyloid, but clinically it had no effect. Those are criteria for terminating a program.”

Petersen argues that it may be that amyloid is the wrong target for Alzheimer’s treatments, and that the protein plaques represent the end result of a process that can’t be reversed by the time they appear. “My guess is that [amyloid] could be a very early initiating event that triggers a bunch of other pathological processes that leads to atrophy in the brain. So the amyloid is decades removed from when the symptoms appear, and to modify it later is perhaps futile. But that’s a tough thing to prove, and a tough study to do.”

If amyloid-based therapies might work earlier in the disease, that would mean doctors would have to correctly identify people at risk of developing Alzheimer’s years, or even decades, before they show symptoms of memory loss or cognitive decline. Then they would have to assign them to take a drug — again for years — and follow them to track changes in their thinking abilities, an expensive and time-consuming endeavor. “It really becomes a belief in faith that amyloid is the instigating event,” says Petersen. “For us to develop a treatment, maybe amyloid is not the best target for us to be attacking.”

Petersen is more optimistic about therapies tackling tau, another protein that tends to appear after amyloid plaques form. It dismantles the elegant infrastructure of the neural networks in the brain. But tau is harder to target than amyloid, since it resides inside nerve cells, unlike the amyloid, which builds up outside of them.

More experts are looking to lessons from the cancer field and are convinced that combinations of drugs, perhaps ones that target amyloid together with ones that attack tau, for example, might eventually prove effective. But such combinations can’t be built until at least one strategy proves effective. “We should be pursuing all strategies available to us,” says Heather Snyder, senior director of medical and scientific operations at the Alzheimer’s Association. “We should be thinking about combinations, not just of drugs but of lifestyle approaches as well, and moving forward with those clinical trials.”

Wooding, for one, is already eager to join another trial. “It’s a bummer,” he says. “But you have to pick up the pieces and try to reconstruct things somehow. I would definitely join another trial. Anything constructive we can do toward a solution, we are all for it.”

He continues to read voraciously, paint and exercise regularly, all activities that can help to keep his brain active. And while he is aware his memory is lapsing, JoAnn says, “he is still Peter. I see definite short term memory issues, but personality-wise, and socialization-wise, and with respect to his attention to books and film and people that have interested him his whole life, those are very much still there.”

While disappointed that aducanumab didn’t prove effective, she and Wooding don’t feel they have wasted the last two years on the study. “You never know whether or not [the drug being tested] is going to do anything,” says JoAnn. “But there is always that hope. Hope is so critical in any disease.” 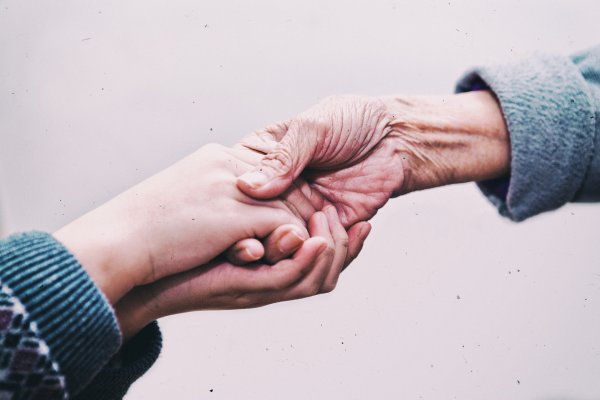