A police officer carries a simulation handgun in his holster after an active shooter drill in Salisbury, Md., on Aug. 13, 2013.
Patrick Semansky/AP
By Katie Reilly

Indiana elementary school teachers say they were “shot execution-style” with plastic pellets and injured during an active-shooter training in January, sparking backlash about the intensity of what law enforcement officers say was a standard drill.

Now, the sheriff says he’ll stop conducting all active-shooter drills with teachers in response to the criticism.

“During active shooter drill, four teachers at a time were taken into a room, told to crouch down and were shot execution style with some sort of projectiles – resulting in injuries to the extent that welts appeared, and blood was drawn,” the Indiana State Teachers Association said in a tweet on Wednesday, adding that teachers were “terrified” and “screaming.”

The Indianapolis Star reported that the training by the White County Sheriff’s Department took place at Meadowlawn Elementary School in Monticello, Ind., which is about 90 miles northwest of Indianapolis. The school posted about the staff training on Facebook on Jan. 4.

White County Sheriff Bill Brooks says his department will no longer conduct active-shooter trainings for teachers due to the backlash.

“I think teachers need to be trained, but I think departments, especially departments of our size, can’t afford the retaliation that was put upon us from this last training,” he tells TIME.

“We will continue to work with schools that were involved in the training,” he says, adding that the sheriff’s department will continue to train law enforcement officers and students about active-shooter situations. “But teachers will not be part of the actual exercise.”

Brooks, who took office in January, says the training, which teachers had to volunteer for, was the same as others that had recently been conducted at other schools in the district, using airsoft guns that shoot plastic pellets.

“It’s an exact training exercise. It’s done the same throughout,” he says. But he denied that teachers were shot “execution-style” during the drill. “I don’t know where that came from,” he says.

The incident in January made national headlines after Indiana State Teachers Association members testified before the Indiana General Assembly in support of a bill that would require all schools to conduct an active-shooter drill at least once a year. The recommendation was proposed in the wake of several deadly school shootings during the past year. But teachers asked lawmakers to place “more reasonable limits” on such drills and add language to the legislation that would prohibit teachers from being shot in any way during training.

“You should not have to consent to having pellets shot at you if you want to be a school teacher,” Indiana State Teachers Association Vice President Keith Gambill, a music teacher in Indiana’s Evansville Vanderburgh school district, tells TIME.

“In Indiana, we have tornados, so we have tornado drills. But we don’t bulldoze the school around the students and the staff for them to know how to do the drill. Some of the trainings, in their effort to try to make it as realistic as possible, aren’t considering the trauma that can be caused.”

Other schools around the country have stepped up safety measures and staff training in response to the threat of school shootings. But educators and safety experts criticized the intensity of the training by the White County Sheriff’s Department.

“We don’t need to scare these teachers straight. They’re already scared. As an educator, we understand that there’s a possibility that this horrific act can occur in my classroom,” says Amy Klinger, director of programs for the Educators’ School Safety Network.

“Why don’t you prepare me instead of simulating and making me live through this nightmare that I’m already scared about? It makes no sense.”

Brooks, the Indiana sheriff, said the instructors from his department were trained by the ALICE Training Institute, which has conducted active-shooter trainings in more than 5,100 law enforcement departments and 5,500 K-12 school districts across the country.

In a statement on Friday, ALICE said it was aware of the Indiana training incident.

The sheriff said he acted quickly, once he was told about the complaint.

“We knew of no incident until weeks later,” Brooks says. “Once we were informed that one of the teachers was upset, we pulled the training. There’s no longer any active shooter training involving teachers.”

In a statement on Thursday, the school district superintendent, Michael Galvin, said the Twin Lakes Classroom Teachers Organization recently “voiced questions regarding how the Sheriff’s Department conducted ALICE training,” and the district facilitated a meeting between the two organizations to discuss the concerns.

“Twin Lakes looks forward to continuing its important partnerships with the Twin Lakes Classroom Teachers Organization and the White County Sheriff’s Department in pursuing a safe environment for all students and employees,” Galvin said in the statement.

A spokesperson for Galvin said Friday that he did not have further comment at this time about Brooks’ plan not to provide active-shooter training for teachers in the future.

Klinger, who leads trainings on active shooter situations and other safety hazards at schools around the country, says she spends the majority of the time training teachers on everything that happens before a face-to-face confrontation with a gunman, including violence prevention and de-escalation. She focuses on training teachers to evacuate quickly and build barricades in their classrooms, per the “run, hide, fight” model recommended by the Department of Homeland Security.

“This training needs to be empowering,” Klinger says. “It needs to come from an education view, and it needs to be looking at all hazards, so it’s not, ‘We’re not going to do anything until the bullets start flying.'”

She says a “train the trainer” model, which ALICE offers, can lead to problems because it involves a couple members of an organization receiving direct training and then becoming instructors to others, even though they might lack a strong background in education or school safety. 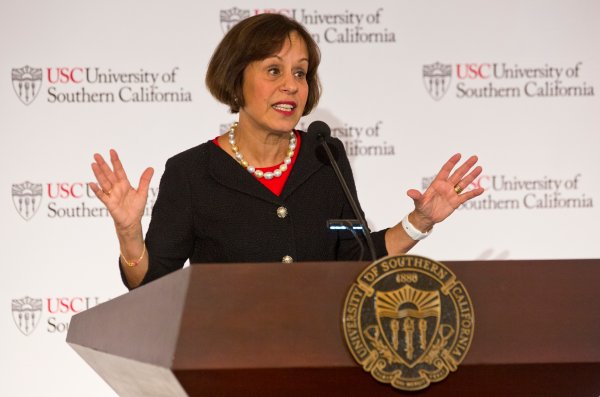 USC Just Named a New President. Here's What She Said About the Admissions Scandal
Next Up: Editor's Pick