New Zealand Banned All Assault Weapons. Could That Work in America?

Gun reform supporters march from the U.S. Capitol to the Washington Monument to call on Congress to pass gun restriction measures on Jan. 26, 2013 in Washington, D.C.
Bill Clark—Getty Images
By Melissa Chan

Less than a week after a gunman allegedly murdered 50 worshippers inside two New Zealand mosques, the nation’s prime minister announced a sweeping, nation-wide ban on assault weapons. The measure was met with swift praise in the U.S. among gun reform advocates, who have long been pleading for similar restrictions. On Thursday, they renewed their calls for change and urged U.S. leaders to follow in New Zealand’s footsteps.

But would a ban like New Zealand’s even hold up in American courts? It’s difficult to say since the U.S. Supreme Court, the nation’s highest court, has not directly addressed whether semiautomatic weapons are protected under the Second Amendment. But constitutional scholars, pointing to a few legal precedents, say it’s certainly feasible.

“It’s difficult to discern the chances,” says Stanford University law professor David Studdert. “But it could hold up in court. That is definitely a possibility.”

Before last week’s mosque attacks, New Zealand had not experienced a mass shooting in nearly three decades. The speed with which the country enacted change highlights the stark differences with how the U.S. has reacted to its own massacres. For instance, after 58 people were slaughtered at a Las Vegas music festival on Oct. 1, 2017—the worst mass shooting in modern U.S. history—it took the federal government more than a year to ban bump stocks—accessories the killer used in the attack to dramatically increase his weapons’ rate of fire. And after 17 people were killed at Marjory Stoneman Douglas High School in Parkland, Fla. in February 2018, the state raised the minimum age to purchase a firearm, among other measures, yet there were no changes to gun laws on a federal level, despite nationwide marches.

Here’s what experts say could happen if a New Zealand-style assault weapons ban was passed into law in America:

What, exactly, does New Zealand’s assault weapons ban do?

At a news conference Thursday, New Zealand Prime Minister Jacinda Ardern said a new federal law would prohibit the sale and possession of military-style semiautomatic weapons, with exceptions made to police and some farmers. It would also ban high-capacity magazines and accessories that can covert firearms into military-style semiautomatic weapons.

“In short,” Ardern said, “every semiautomatic weapon used in the terror attack on Friday will be banned in this country.”

As part of the new law, which is expected to be in place in a matter of weeks, the prime minister said gun owners would have a “reasonable” amount of time to give up and sell their weapons to the government. The buyback program is estimated to cost New Zealand up to 200 million New Zealand dollars, or $140 million. However, the prime minister said it’s unclear how many of the guns are currently in circulation.

“That is the price that we must pay to ensure the safety of our communities,” she said.

New Zealanders who illegally possess weapons currently face a fine of 4,000 New Zealand dollars ($2,750) and three years in prison. Those penalties could increase under the new law, the prime minister said.

The announcement comes after a white supremacist opened fire inside two mosques in Christchurch on March 15. Ardern said the suspect, who live-streamed the massacre, used at least two assault rifles in the attacks. Purchased legally with a standard firearms license but modified illegally to enhance their capacity, the weapons, Ardern said, “had the power to shoot continuously.”

Would that kind of ban even be legal in America?

It’s unclear for now, but experts say the existence of the Second Amendment on its own is likely not enough to protect semiautomatic weapons. The argument boils down to the Supreme Court’s landmark Heller decision. In 2008, the court upheld that the Second Amendment protects a private citizen’s individual right to possess a firearm that is in “common use,” and to use that firearm for “traditionally lawful purposes,” like self-defense at home.

The ruling says handguns at home are constitutional, but not machine guns. It does not offer guidance on semiautomatic weapons like AR-15-style assault rifles that were used in Christchurch and many U.S. mass shootings. That’s where the issue gets blurry. “The Supreme Court has not said that the Second Amendment protects anything that New Zealand has banned,” says Roger Williams University law professor Carl Bogus. “But nobody knows, when faced with particular questions, how that court would answer.”

On one hand, experts argue that firearms like the AR-15 are commonly used for lawful purposes, like recreation, and therefore protected under the Second Amendment. “The kinds of rifles that are going to be banned in New Zealand are commonly possessed in the U.S. by millions of law-abiding people,” says Stephen Halbrook, an attorney who has represented the National Rifle Association on other issues in federal court. “They’re very widely possessed for sport and target shooting and self-defense. If you applied that test, this type of law would not be permissible here.”

On the other hand, there are some precedents that show how a national ban could be found legal, according to constitutional scholars.

For one, fully automatic weapons, including machine guns—which fire in rapid multiple rounds with a single trigger pull—are illegal under the National Firearms Act. Experts say that law, originally enacted in 1934, shows that it would be legal to limit civilian possession of some guns.

More significantly, under a law passed by Congress that went into effect in 1994, assault weapons were temporarily banned in the U.S. While constitutional scholars say the law, which had a 10-year expiration date, was riddled with loopholes, it still shows the such a ban was not struck down by the courts.

On a local level, although the laws have been challenged in court, seven states and Washington, D.C. have put their own restrictions on assault weapons or large-capacity magazines, according to gun safety groups Brady and the Giffords Law Center to Prevent Gun Violence.

And at least three U.S. Circuit Courts have also said bans on assault weapons are lawful.

Because the Supreme Court decided not to hear those lower court appeals, it has been considered a win for gun-control advocates. “It suggested some hesitancy on the part of the court to overturn these laws,” according to UCLA School of Law professor Adam Winkler, who wrote Gunfight: The Battle Over the Right to Bear Arms in America.

But that might all change. Earlier this year, the Supreme Court decided to take on its first big gun rights case in nearly a decade. The nine justices, five of whom are considered to be conservatives, agreed to weigh in on whether it’s constitutional for New York City to restrict gun owners from transporting their licensed, locked and unloaded handguns to second homes or shooting ranges outside of the city. It’s the only law of its kind in the country, according to Halbrook and Winkler.

The Supreme Court’s ruling in the case could expand Second Amendment rights. At a minimum, experts say it’s a sign that the ambiguity surrounding gun laws could become clearer.

“The court for years has refused to take a bunch of gun cases,” Winkler says. “Now the justices may be more willing to grapple with these questions.” 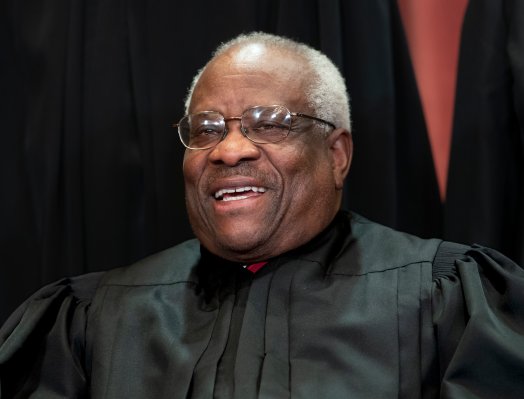 Clarence Thomas Just Asked His First Question in a Supreme Court Argument in 3 Years
Next Up: Editor's Pick