You Might Not Recognize Baseball’s Highest-Paid Star. For the MLB, That’s a Problem

Mike Trout of the Los Angeles Angels of Anaheim looks to the Angels dugout during a September 28, 2018 game against the Oakland Athletics at Angel Stadium in Anaheim, California.
Victor Decolongon—Getty Images
By Sean Gregory

Finally, Mike Trout is buzzing across the country! Mike Trout’s a thing!

Trout, the generational baseball talent who plays center field for the Los Angeles Angels, signed the largest contract in North American professional team sports history. It’s a 12-year, $426.5 million extension with the Angels. The contract topped — by nearly a cool $100 million — the previous high of $330 million over 13 years, which Bryce Harper fetched from the Philadelphia Phillies less than three weeks ago. Harper chirped about recruiting Trout to the Phillies when he became a free agent after the 2020 season: Trout’s from South Jersey, and grew up a Phillies fan. But rather than relocate, Trout preferred a paycheck the size of Tonga’s GDP.

Days before the start of March Madness, Trout’s face popped up on ESPN throughout the day, as the network’s pundits debating the merits of the deal. He was trending all day on Twitter. MLB marketing execs were surely smiling.

It’s not that Trout is in any way toxic or anything. In fact, quite the opposite: by all accounts, Trout is a genuinely nice fellow who goes out of his way to sign autographs and do good deeds. No whiff of controversy, steroid or legal or otherwise, trails him.

Trout’s the best player in the national pastime. He’s won two AL MVP awards, and finished in the top two in the MVP voting in all but one of his seven full big-league season. According to analytics site baseballreference.com, his production through age 26 measures up to that of Frank Robinson, Ken Griffey Jr., Mickey Mantle, and Hank Freakin’ Aaron. The issue is that there’s a good chance that if he walked into your Olive Garden, you’d keep eating your breadsticks. Meanwhile, if LeBron James or Tom Brady did the same, you might choke on them.

Trout’s probably the most anonymous super-duper athletic star in America. According to The Q Scores Company, a marketing research firm, Trout has a familiarity score of 22 — meaning just 22% of Americans know who Mike Trout is. Meanwhile, Tom Brady has an awareness rating of 79, and LeBron James clocks in at 74. (Yes, it’s hard to believe that one in four Americans aren’t familiar with LeBron James. Guess it’s a big country out there.)

According to Q Scores Executive Vice President Henry Schafer, baseball players generally score lower in familiarity than football and basketball players. While Brady and James have ratings in the 70s, baseball’s most famous active player is Miguel Cabrera, with a score of 27. Trout’s score is similar to that of NFL players like Atlanta Falcons wide receiver Julio Jones, Los Angeles Rams quarterback Jared Goff and Cleveland Browns quarterback Baker Mayfield, who’s played in 14 career NFL games. Those players haven’t matched the greatness of Trout in their sport.

Trout’s score is also comparable to that of Cleveland Cavaliers forward Kevin Love, who has a 23. Love’s a fine player, a five-time All-Star. But if more Americans are familiar with a guy who’s on one of the worst teams in the NBA — and has been injured most of this season — than the best player in baseball, that’s bad news for baseball.

MLB’s aware of this. At last summer’s All-Star game, Trout’s aversion to self-promotion became a bit of a sticking point. Commissioner Rob Manfred noted that if Trout “wants to engage and be more active” in marketing himself, “I think we could help him make his brand really big. But he has to make a decision that he is prepared to engage in that area, and it takes time and effort.”

“We applaud him for prioritizing his personal values over commercial self-promotion,” the statement read. “That is rare in today’s society and stands out as much as his extraordinary talent.

Trout might score higher if he played on a better team. While James and Brady have made regular appearances in Super Bowls and NBA Finals, Trout’s played in one postseason series, in 2014; the Kansas City Royals swept the Angles in three games, and Trout hit .083, though his one hit was a home run. You can’t blame Trout for failing to make the playoffs almost every year. It’s much harder for a great baseball player, who only comes up to the plate every nine at-bats, to carry a team on his back like a quarterback who’s involved in every offensive play, or a basketball player who can have the ball in his hands on every offensive possession.

Other factors beyond Trout’s control also account for baseball’s buzz issues. Long games turn off some younger attention-challenged fans. While pace of play initiatives like limiting mound visits and a timing clock for pitching changes helped quicken games a bit last season, the average game still checked in at three hours per nine innings, 10 minutes longer than a decade ago, and more than a half-hour longer than games 40 years ago. Also, baseball fandom is more localized. While it’s easier to follow basketball and football stars on national platforms like ESPN, TNT and Monday Night Football, following 30 teams over a 162-game season takes too much time and energy.

There used to be Monday Night Baseball on broadcast TV. It didn’t last like its football brethren. “Baseball is much more of a geographically contained sport,” says J.C. Bradbury, an economics professor at Kennesaw State University and author of The Baseball Economist: The Real Game Exposed. “MLB has figured out that by going after lucrative regional TV contracts, we’re going to get our money.”

Still, baseball players have the potential for mass cultural relevance. Derek Jeter, for example, transcended sports. MLB is also taking more measures to market its players. Trout, for example, will appear in a new MLB ad on Opening Day, March 28.

But Trout’s probably never going to be the “it” guy. You can’t fake charisma. And his contract, eye-popping as it may be, will soon lose its clout. Don’t forget, Giancarlo Stanton once signed the richest contract in North American pro team sports, a $325 million deal with the Miami Marlins in 2014. Right before signing, 11% of Americans were familiar with Stanton, according to Q Scores. Today, even after he subsequently hit 59 home runs one season in Miami and now plays for the New York Yankees — in the country’s largest market, for the game’s most storied team — Stanton checks in at 13, a difference of just two points. Such a spread is within the poll’s margin of error. So it’s completely possible Stanton’s no more famous today than he was five years ago. 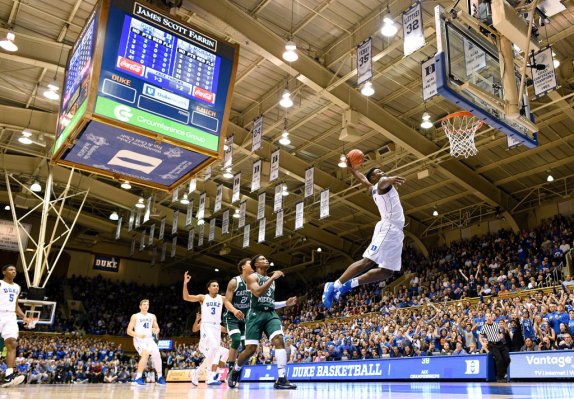 Want to Win March Madness? These 10 Players Could Lift Your Bracket to Office Pool Victory
Next Up: Editor's Pick