Take a lesson in having fun from Mike Alancourt, the bearded dancer who performed on Monday for the The Ellen DeGeneres Show.

The 43-year-old went viral after a video from his dance class at 1 Vibe Dance, a studio in Jacksonville, Fl., impressed the world earlier this month. The video, featuring Alancourt and two women dancing to Post Malone‘s “Wow.,” reached 23 million views in total on Instagram, DeGeneres said. Will Smith and Post Malone both shared the video on their accounts — Post Malone’s reposting alone earned 6.5 million views.

“Honestly, I just love dancing so much. I have such a good time in the video,” Alancourt told DeGeneres after finishing his routine. “I think that’s what people were connecting to, and apparently, 23 million people just wanted to have a good time with me for a minute.”

DeGeneres surprised the dancer with a video from Post Malone himself personally inviting Alancourt to his performance in Arizona on Sunday. “I love your moves,” the artist said. “It would be fun to have you.”

With that rhythm and choreographic precision, it’s no surprise that DeGeneres had to invite him on her show.

Watch the full video of Alancourt’s surprise from Post Malone below. 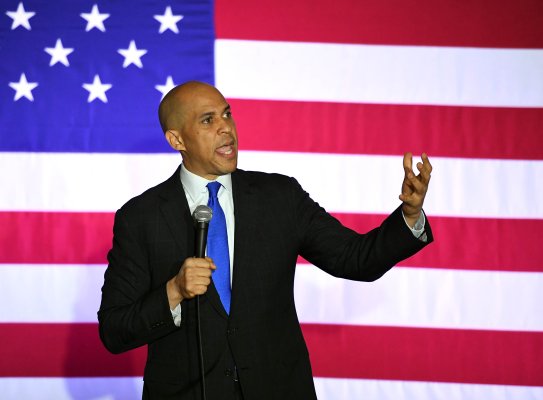 Relationship Timeline: Cory Booker's Been Telling the Same Corny Joke About Coffee for a Decade
Next Up: Editor's Pick