A Strong Earthquake Turned a High-Powered Telescope Into a Seismograph

Scientists have gotten awfully good at the business of seismography. At any moment, the Global Seismograph Network (GSM), a web of 150 instruments arrayed around the world, is reliably taking the pulse of the planet. There have been seismographs on the moon — sensitive enough to detect the footsteps of the astronauts who brought them there. A seismograph is currently at work on Mars, as part of the suite of instruments carried by NASA’s InSight lander.

Now, science has stumbled across a new — and inadvertent — kind of seismography, with earthquakes recorded not by tracings on a screen or a paper strip, but by seeming wobbles in the stars above.

On January 20, Chile was hit by a 6.7 magnitude earthquake. The country’s Atacama Desert is home to a growing array of international telescopes — thanks to its high elevation and utterly clear, dry air. At the moment the quake hit, the La Silla Observatory, just 56 miles from the epicenter of the event, was taking 10-second, long-exposure pictures of satellites in what is known as a geostationary orbit.

From the ground, geostationary satellites never appear to move because they fly at such a high altitude — more than 22,000 miles up — that their orbit matches the 24-hour rotation of the Earth. They thus seem forever to hang over a precise point on the ground, which also means that a telescope image of one them — even a long-exposure one — would read as a single point of light. The stars beyond the satellites, however, would come out as streaks, as the telescope moved along with the Earth. If the telescope was shaking when the lens was open, the picture would reflect that.

The luminous tracks in this image represent three ten-second exposures of stars — the first about 41 seconds after the quake began, and the last about 59 seconds later. There’s not much that scientists could learn from the image that the seismographs couldn’t tell them better. But the cardiogram-like tracings are important all the same. We inhabit a living Earth, with its own heartbeat and rhythms and geologic body heat. A picture that reminds us of that fact teaches us more than a seismograph ever could. 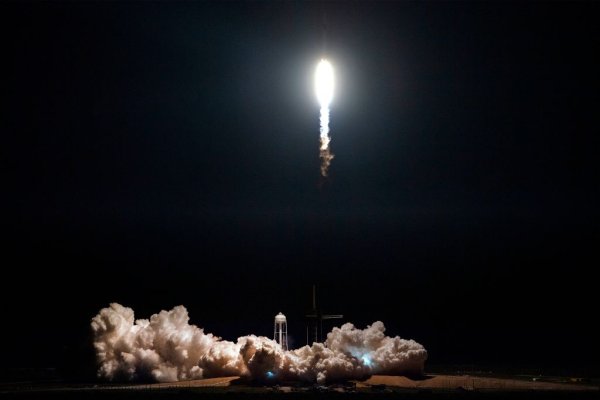 SpaceX's Crew Dragon Is Safely Back On Earth
Next Up: Editor's Pick