John Oliver did some self-reflection on Sunday night’s Last Week Tonight as he discussed public shaming. “My show makes fun of people all the time,” he said. “We are a comedy show.” However, he and his team “think a lot about who they might be making fun of,” and came to the realization that “if they have a soul patch then they don’t care who the person is even if they are a private citizen.”

However, Oliver admits that he has occasionally gone too far. Like in the case of Monica Lewinsky, who in the wake of her affair with then-President Bill Clinton, found herself becoming what she now calls “patient zero of losing a personal reputation on a global scale.” Oliver notes that his hands are not clean, because on the 10th anniversary of the Clinton scandal, at The Daily Show Oliver ran an episode called “10 Suckin’ Years,” which, he now admits, “was gross.”

While lots of comedians have since apologized to Lewinsky for their treatment of her, one who has not is Jay Leno, and according to Oliver he may have been the harshest, including a fake Dr. Seuss book about her called “The Slut in the Hat.” This is ironic to Oliver, because just last week Leno stopped by The Today Show and said he “wished late night shows would go back to more civility.” As a response, Oliver offered his own book “Oh, the Places You Can Go F— Yourself, Jay Leno!”

That said, not all public shaming is bad, Oliver acknowledged, particularly when it’s pointed at racists or when it can “increase accountability” if a powerful person is behaving badly. Take Fox News Channel host Tucker Carlson — who Oliver described as “the answer to the question, ‘What if the sound “thud” grew a face’” — had said some controversial things as a guest on a radio show a few years ago, such as comparing women to dogs, and saying Warren Jeffs, who is serving a life sentence for the sexual assault of underage girls, “wasn’t that bad,” Oliver told viewers.

Carlson refused to apologize, and the public shaming kicked in on Twitter with trending hashtags “like #boycotttuckercarlson, #firetuckercarlson, and #tuckercarlsonf—shisroomba,” Oliver quipped, admitting the last one “technically” was not trending, “but I have this weird feeling it will be in 20 minutes or so.” 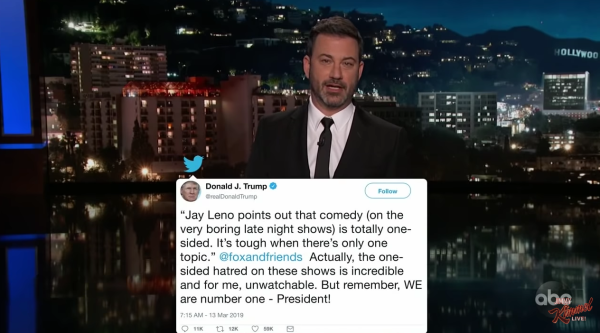 Jimmy Kimmel and Stephen Colbert Both Clap Back at Trump
Next Up: Editor's Pick