Jordan Peele works with exacting precision: He once said that “every frame has to be beautiful.” Us, his terrifying follow-up to Get Out, is filled with blink-and-you-miss-it allusions that span from religion to film to music. Here is a guide to the most central references in Us (spoilers ahead).

The opening scene of Us shows a young Adelaide (Madison Curry) watching a commercial for Hands Across America, a 1986 benefit in which more than six million people formed a human chain across the country, from coast to coast, with the aim of raising money to combat hunger and homelessness. (The reference memorably returns in the movie’s final scenes, as well.) The campaign was organized by Ken Kragen, who had also pulled together “We Are the World”; he aimed to raise $100 million for charitable causes.

The chain stretched from New York City to Los Angeles, with President Ronald Reagan, Coretta Scott King and Brooke Shields joining in at various points. Participants held hands and sang songs for fifteen minutes. In more remote areas, paper dolls—just like the ones that Adelaide’s nemesis Red displays toward the end of the film—filled in the gaps between actual humans.

But the event fell well short of its goals, ultimately only distributing $15 million to charities, according to the New York Times. And to Peele, the event possessed a darker undercurrent that ran through many cultural events of its era. “There was this kind of almost Stepford-creepy sense of American hope that we can do anything as long as we just hold our hands together,” Peele told the L.A. Times.

A subtle tribute to C.H.U.D.

The opening shot moves outward from the commercial onto a bookshelf full of VHS tapes, including The Goonies and C.H.U.D. The latter film is a 1984 sci-fi horror film that shares a key element with Us: Its villains are humanoid monsters that emerge from their underground homes to terrorize the American public.

Pivotal sequences of Us are set on the Santa Cruz boardwalk, the setting of the 1987 cult classic vampire flick The Lost Boys. That film also features plenty of monsters, a home break-in and an attempted barricade.

The opening sequence of Us, in which Adelaide wanders down a boardwalk and encounters a supernaturally-charged entity, also calls to mind Big—in which a fortune teller machine transforms a boy into a man (famously played by Tom Hanks).

When an adult Adelaide (Lupita Nyong’o) arrives in Santa Cruz with her family, she starts to notice doubles everywhere. This includes a strange man holding a cardboard sign reading “Jeremiah 11:11.” The number itself will appear several times throughout the film, including on a clock when Adelaide puts her son Jason to bed and on a Black Flag t-shirt, which features four vertical blocks that resemble the numerals.

The actual Bible verse Jeremiah 11:11 foreshadows the doom and hopelessness that will dominate the film’s second half: “Therefore this is what the Lord says: ‘I will bring on them a disaster they cannot escape. Although they cry out to me, I will not listen to them.”

Bible verses have also been cited in horrific situations in films like Pulp Fiction and The Shawshank Redemption. And Christian themes pervade many horror films, including The Conjuring, The Exorcist and Bram Stoker’s Dracula.

Twins have unnerved audiences time and time again throughout cinematic history. Most famously, the Grady Twins waited at the end of the hall for Danny Torrance in The Shining. (Peele himself was recently spotted in an outfit reminiscent of the one Danny’s father Jack, played by Jack Nicholson, wore in that movie.) Sets of twins also wreaked havoc in Brian De Palma’s Sisters, David Cronenberg’s Dead Ringers, and Goodbye Gemini.

More than a century earlier, Edgar Allan Poe explored the phenomenon in the short story “William Wilson.” In that story, the protagonist—who, coincidentally or not, shares the same last name as the family in Us—is driven insane by his doppelganger.

But Peele has said that the specific inspiration for the terrifying doppelgangers in Us came from “Mirror Image,” an episode of The Twilight Zone. In the episode, a woman (Vera Miles) sees her doppelganger at a train station; she becomes convinced that the sinister twin has come from another dimension to replace her.

“It’s terrifying, beautiful, really elegant storytelling,” Peele said. He will host a reboot of The Twilight Zone on CBS All Access starting April 1.

A funhouse of mirrors

Funhouses have set the scene for many dramatic film face-offs. Rita Hayworth traded bullets with an assassin in The Lady From Shanghai; Bruce Lee came up with fistfulls of glass in Enter the Dragon. More recently, Keanu Reeves fought off a series of assassins through a hall of mirrors in John Wick: Chapter 2.

A curriculum of horror history

Before filming, Peele gave Nyong’o a list of ten horror films to watch, according to an interview with Entertainment Weekly, offering a sense of what might have been on his mind while developing Us. The curriculum included Funny Games, which also features a family being terrorized, The Shining, The Babadook, It Follows, and The Sixth Sense.

The music of California

The music that the characters listen to during the film is dominated by Californian artists. The Wilsons jam in their car to “I Got 5 On It,” a 1995 hit by the Oakland duo Luniz. Right before the Tyler family, friends of the Wilsons, is attacked, the patriarch Josh (Tim Heidecker) puts on the Beach Boys’ “Good Vibrations,” the epitome of West-Coast bliss. As the family is murdered, the song is replaced by “F-ck tha Police” by N.W.A.—a more searing indictment of life in Los Angeles. 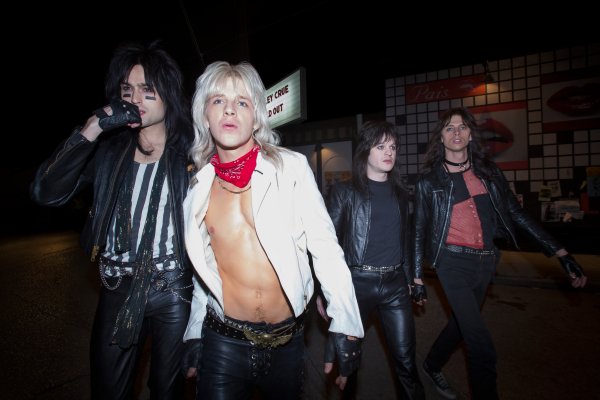 The True Story Behind Netflix's Mötley Crüe Movie The Dirt
Next Up: Editor's Pick