Rep. Eric Swalwell of California’s 15th District has been serving his constituents as a Democratic congressman since he was first elected to the position in 2013. But it’s only now that voters are discovering one hilarious part of his back story, thanks to a viral high school yearbook photo that’s making the rounds online after it was dug up by Mercury News.

Swalwell, who has been considering putting his hat in the ring for the 2020 presidential election, attended Dublin High School in Dublin, California in 1999. And his senior portrait is an apt snapshot of the styles of the time, featuring Swalwell with perfectly spiked, bleached hair, an impressive tan and a crisp bow-tie. As the photo made its internet debut, commentators had plenty to say about the regrettable (and very popular) hairstyle of the era in particular — and even Swalwell himself was moved to comment on the image.

“All of us make bad decisions in high school,” he tweeted. “Sometimes those decisions involve bleach. I swear there were others…” (These days, Swalwell can be seen rocking his presumably natural brown hair color.) And from his personal Twitter, he added: “I’m surprised I survived it too.”

Besides mulling a presidential bid, Swalwell has most recently helped reintroduce the Journalist Protection Act and a bill to protect victims of domestic violence from guns, and shared his support of the Equality Act to end LGBTQ discrimination. He has said he will decide on his 2020 run by the end of March. 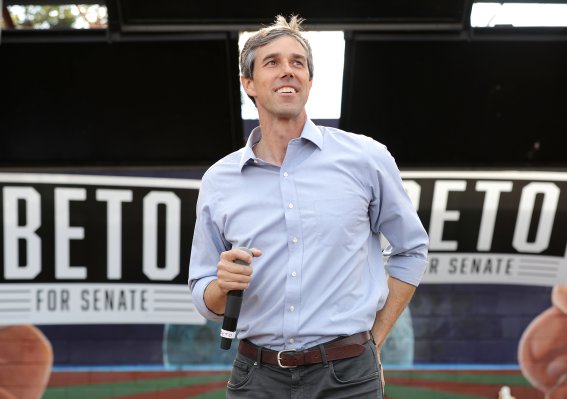 Beto O'Rourke's Charismatic Dog Is Stealing All His Thunder
Next Up: Editor's Pick