President Donald Trump speaks to the press before boarding Marine One at the White House in Washington, DC, on March 8.
Mandel Ngan—AFP/Getty Images
Ideas
By Philip Bobbitt
Bobbitt is professor of law at Columbia University and lecturer at the University of Texas.

One frequently hears that impeachment is a “political question,” not a legal one. After all, Congress, which brings impeachment proceedings, is a political body. Then minority leader of the House Gerald Ford even claimed in 1970 that the grounds for impeachment are whatever the House takes them to be by voting for an indictment.

But impeachment should be a matter of law.

The Constitution does not say that the President can be removed whenever one-half of the House and two-thirds of the Senate want to do so. It specifies legal bases for pursuing it: “Treason, Bribery or other high Crimes and Misdemeanors.” The text commands the Senate to “try” the case referred to it by the House. It requires Senators to take a special oath to apply the law of the Constitution. It provides that the trial is presided over by the Chief Justice. In “Federalist No. 65,” Alexander Hamilton took pains to show that the Senate can in fact act in “their judicial character as a court for the trial of impeachments.”

The politicization of impeachment stems in part from the phrase “other high Crimes and Misdemeanors.” Treason and bribery are clear-cut. But treason is only applicable in wartime and proving bribery requires evidence of a corrupt motive, which is usually hard to find. So nine days before the Framers signed the Constitution, George Mason expressed the concern that all “attempts to subvert the Constitution” were not covered. After some debate, they settled on the phrase “other high Crimes and Misdemeanors.”

The key to construing the legal meaning of this otherwise elusive phrase lies in the word other. The “high” crimes that serve as the basis for impeachment must be crimes like treason and bribery. They must be extremely serious constitutional crimes, acts that subvert our basic political and governmental processes.

Which brings us to the 2016 election and the Trump presidency.

The hacking of the Democratic National Committee in 2016 was clearly legally comparable to the Watergate burglary of the DNC in 1972, which led the House Judiciary Committee to approve articles of impeachment against Richard Nixon. We don’t yet know whether Donald Trump is implicated in the hack, but even if he isn’t, the Watergate precedent applies if he contrived to use his office to thwart an investigation into the crime. After all, there was no evidence that Nixon knew about the Watergate burglary beforehand.

What about the digitalization of disinformation by Russian agents in 2016? If implicated in this activity, President Trump could be impeached, even though those actions would have occurred before he took office. Mason observed during the Constitutional Convention that a President “who has practiced corruption & by that means procured his appointment in the first instance” might properly be impeached.

Article I, Section 9 of the Constitution contains the emoluments clause that prohibits federal officeholders from accepting payments or gifts from a foreign state without the consent of Congress. Can a violation warrant impeachment? The answer turns on whether U.S. policy is affected. For example, Trump could be impeached if he showed leniency toward Saudi Arabia or Russia in return for payments made to the Trump Organization, even if those payments are not provable bribes.

The President can be impeached for promising or granting pardons. Suppose a President were to announce and follow a policy of granting full pardons to all federal agents or police who killed anybody in the line of duty in the District of Columbia, whatever the circumstances and however unnecessary the killing. Such an act is not unequivocally unconstitutional, given the sweep of the President’s pardon power, yet no one should doubt that such a policy would be a breathtaking abuse of executive authority of the kind and on a scale that plainly subverts the political and governmental process.

In the past 20 years, we have drifted toward making impeachment a political decision, determined by polls and calculations of partisan advantage. That course should be reversed before it further undermines the Constitution that the impeachment clause is meant to protect. 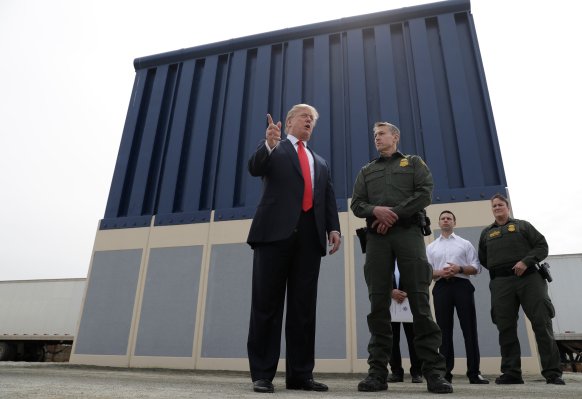 The Fight Over Trump's Emergency Declaration Is Symbolic. But It Still Matters
Next Up: Editor's Pick