Fort Trump? The Pentagon Takes a Step Toward Establishing Base in Poland

Polish President Andrzej Duda (R) and US President Donald Trump shake hands prior to a meeting at the Royal Castle in Warsaw, Poland, July 6, 2017.
SAUL LOEB—AFP/Getty Images
By W.J. Hennigan

The Trump Administration has drawn criticism for considering U.S. troop withdrawals from Afghanistan and Syria, but it’s considering at least one new permanent military base overseas. It even has a suggested name: “Fort Trump.”

Under Secretary of Defense for Policy John Rood is in Warsaw, Poland this week to discuss the proposed base, which would boost the Pentagon’s presence along Russia’s western border. The negotiations take place as Washington’s and Moscow’s militaries already face off in close proximity at several flashpoints in places like Syria and across eastern Europe.

The U.S. currently maintains about 4,000 troops in Poland on a rotational basis, including an armored brigade combat team. The deployment started after Moscow’s annexation of Crimea in 2014 as part of a North Atlantic Treaty Organization (NATO) mission to establish a bulwark against Russian aggression on the alliance’s eastern flank.

Poland welcomed the deployment but has long urged the U.S. to establish something more permanent. Polish President Andrzej Duda floated the idea for a new, permanent military base to President Donald Trump in-person during a trip to Washington in September. His selling points? The Polish government would pay $2 billion to the United States and, he joked, the base would be named “Fort Trump.”

Trump put off a decision at the time, saying he wanted his administration to examine the proposal. “We’re looking at it from the standpoint of, No. 1, military protection for both countries, and also cost,” Trump said at a joint press conference with Duda.

The Pentagon, directed by last year’s Defense spending bill, studied the feasibility of permanently stationing U.S. forces in Poland. The report, which was due to Congress on March 1, was designed to inform the Pentagon’s plan ahead.

“We have come forward with what we think is a very serious robust offer and we’re just working out some of the technicalities this very week,” Kathryn Wheelbarger, the acting assistant defense secretary for international security affairs, told a House panel on Wednesday. “We hope to have a solid foundation to work from, coming out of this meeting.”

If Poland agrees to the terms, the State Department would be the lead negotiator for the technical agreement on the facility, Wheelbarger said. “We are looking at probably six months to a year for that to be finalized,” she added.

Gen. Curtis M. Scaparrotti, who commands all U.S. and NATO forces in Europe, said at the same hearing that he supported having a mix of permanent troops and rotational forces in Poland. “A more permanent base is helpful because of the relationships you build and the mission they have,” he said.

The establishment of a new base in Poland — regardless of whether it’s actually named Fort Trump — would be a positive sign for NATO, which has had a tumultuous relationship with Trump and his isolationist “America First” foreign policy. In July, the president insulted allies and questioned the value of NATO at alliance headquarters in Brussels. Poland, which was caught behind the Iron Curtain after WWII, was granted NATO membership in 1999, and brought into the European Union in 2004.

Defense hawks have repeatedly called on the United States to take a more active role against Russia, particularly in Eastern Europe, as the relationship between the two nations has deteriorated. The Atlantic Council, a Washington non-profit, issued a 16-page report in December that the U.S. needed to bolster its defense posture on the European continent. It was written by Philip Breedlove, retired U.S. Air Force general who commanded all NATO forces in Europe, and Alexander Vershbow, a former NATO deputy secretary general.

“While the NATO battle groups and the U.S. rotational brigade combat team both have warfighting capabilities, they lack a compre­hensive and coordinated battle plan between NATO and the United States, as well as adequate enablers — including intelligence, surveillance, and reconnais­sance assets; air and missile defense; and long-range fires,” the report said. “A determined Russian conventional attack, espe­cially if mounted with little warning, could defeat these forward-deployed NATO and U.S. forces in a relatively short period of time, before reinforcements could be brought to bear.”

The conversation about expanding U.S. presence overseas takes place less than a week after a Bloomberg report that said the Trump Administration wants any country that hosts U.S. troops on their soil to pay the full price of those soldiers’ deployment, plus 50 percent premium for their services.

Wheelbarger replied that she wasn’t sure that if the proposal, colloquially known as “cost-plus-50,” was a real Administration policy. And even if it was, it wouldn’t pertain to the base in Poland. “My understanding is that rhetoric came from conversations from the Pacific,” she said. “It’s not a conversation we’ve had in my portfolio at all.” 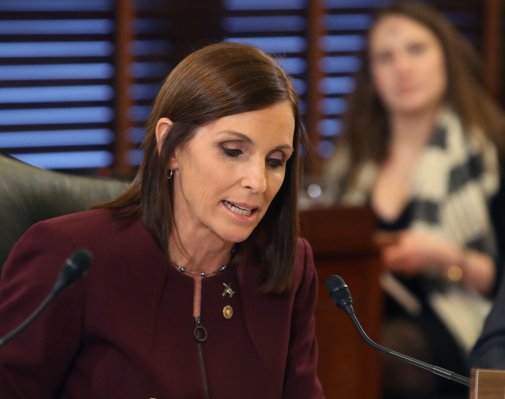 'Don't Let Your Assaulter Rob You of Your Future': Sen. Martha McSally Revealed Her Rape to Empower Survivors
Next Up: Editor's Pick