The Fight Over Trump's Emergency Declaration Is Symbolic. But It Still Matters

President Donald Trump’s border wall began as a symbol of his approach to immigration, so it’s only fitting that it may be rejected symbolically on Thursday as well.

At least five Senate Republicans are positioned to join Senate Democrats on a resolution rejecting his declaration of a national emergency along the U.S. southern border, enough to send the measure to the White House but not enough to override Trump’s expected veto there.

But while that outcome would be a mostly symbolic rebuke of the president, it still matters. Experts say the resolution — the first time Congress has ever voted to overturn an emergency declaration — could weigh heavily on the minds of federal judges considering legal challenges to it.

And for Trump, even a symbolic rejection would be cause for alarm.

Senate Majority Leader Mitch McConnell has warned senators that the White House is closely watching the vote on his top domestic priority of building a wall. In the end, the President is likely to get his wall. McConnell warned of political consequences from the White House for lawmakers who oppose Trump.

“This is not a free vote,” he has told Republicans, according to an aide familiar with the conversations.

Senate Democrats are united in their opposition to Trump on this issue and are expected to vote en masse for a resolution telling him his sidestepping of Congress via emergency declaration is unacceptable. The Democratic-led House already has passed its resolution against Trump’s executive move, which gives the President broader powers when he says the country faces an emergency.

Trump is ready for the Democratic opposition, tweeting on Wednesday that the Democrats “are for Open Borders and Crime!” That rhetoric was at the fore of last fall’s election, when Trump insisted without evidence that the United States was under attack from the south and a border wall was needed. Democrats then made historic gains and tipped the balance of power in the House in their favor.

The very real question that the White House is trying to answer is whether Republicans, who have the majority, can stem the defections on their side. Five Republicans have said publicly that they are set to vote for the limits on Trump: Sen. Thom Tillis of North Carolina, Sen. Susan Collins of Maine, Sen. Lisa Murkowski of Alaska, Sen. Rand Paul of Kentucky and Sen. Mike Lee of Utah.

Others may be inclined to join them if it looks like a wave of opposition is imminent.

For his part, McConnell has been ambivalent about Trump’s border wall. He would rather focus on confirming judges and rolling back regulations. He was miffed that the President chose to send the government into a record shutdown over the border wall, only to reopen it without anything to show. And he’s not especially keen on any White House infringing on Congress’ constitutionally mandated control over spending.

Still, McConnell recognizes the importance of a wall to Trump and his supporters. The 2020 election cycle could be difficult for not just Trump, but also to McConnell’s caucus. An energized conservative base is good for all Republicans on the ballot, and a wall is an easy prop for that goal.

Vice President Mike Pence has been working hard behind the scenes to flip Republican votes against the declaration by arguing that the plan is moving forward, with or without lawmakers’ backing. Officials see Tillis, who faces re-election in politically divided North Carolina next year, as a potentially wavering “no” vote.

They also have worries about Sen. Ted Cruz, whose constituents in Texas could be forced to hand over miles of land for the wall.

Another pressure point for Cruz? The precedent of allowing the President to control the federal purse, not Congress. Several tea party-styled politicians are having trouble setting aside their ideals to erode the separation of powers and to expand federal reach.

Pence had been in regular contact with Lee, who had offered a compromise measure that would allow Trump to get away with declaring an emergency this one time but then curb the power going forward to short-term emergencies that would require Congress to approve them every 30 days. Pence made no commitment, knowing there’s no way to sway Trump. Trump phoned Lee on Wednesday and told they had no deal, and Lee then told reporters that, in effect, talks on a compromise were over.

Speaking to reporters in the White House Thursday afternoon, after he had spoken with Lee, Trump seemed noncommittal when asked about compromise talks. He instead would say only that he would talk with Republican senators about it “in a little while.” But he did say it would be “a bad thing” to vote against his emergency declaration.

Even so, nothing Congress is poised to do is likely to matter, at least not immediately. Critics say Congress’ initial disapproval could be useful in already proceeding lawsuits over Trump’s move. Still, there is little risk that critics of this emergency declaration can muster 67 votes overturning Trump’s veto. At best, they may get to 56, officials say, so the votes are merely a way to irritate the President and complicate his fights in courtrooms.

And the President, as his former campaign chairman was sentenced in Washington courthouse to an additional three and a half years in prison, tweeted that “Republican Senators are overthinking tomorrow’s vote.”

Speaking to reporters in the White House Thursday afternoon, Trump was noncommittal on the Lee compromise, saying only that he would talk with Republican senators about it “in a little while.” But he did say it would be “a bad thing” to vote against his emergency declaration.

That includes Republicans. For Trump, it doesn’t matter if they’re members of his own party. For this president, it’s always personal. 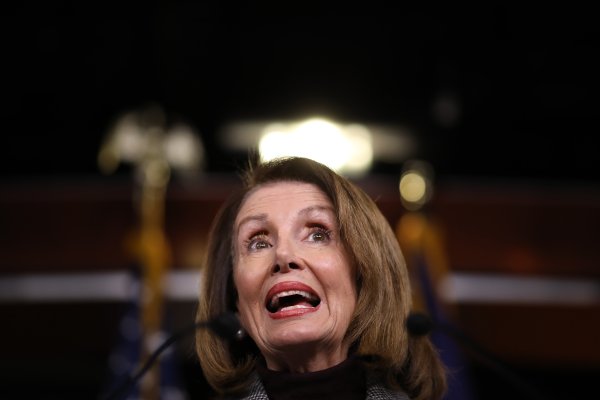 'He's Not Worth It.' Pelosi Says She Opposes Impeaching President Trump Because It Would Divide the Country
Next Up: Editor's Pick