“If you like a man with power, I’m your guy,” Howard X read aloud as he looked up from the Tinder profile open on the screen of his iPhone.

The Kim Jung Un impersonator, who made international headlines last month when he was deported from Vietnam, laughed as he showed off the fake dating profile he created for his North Korean alter ego. Unfortunately for him, Kim’s profile receives a lot more right swipes than his personal one. “What can I say, women like assholes,” he said.

Although he looks nearly identical to North Korea’s Supreme Leader, the affable Hong Kong-born Howard is constantly cracking jokes when he is out of character, making it hard to imagine him as a ruthless despot.

Howard first dressed up like Kim as an April Fool’s Day joke, he told TIME from a hair salon in Hong Kong’s bustling Tsim Sha Tsui district, where we watched him transform into a replica. When a picture he posted on Facebook landed him an Israeli television commercial for a burger chain, he realized his looks might present a career opportunity.

The gig occasionally lands him in hot water, but more often than not, his imitations evoke laughter. “All the police and immigration officials wanted selfies,” he said, referring to his deportation from Hanoi before U.S. President Donald Trump and the real Kim’s second summit in late February.

Aside from playing Kim, the multi-talented Howard is a drummer, he runs a samba school and he was once nominated for Best Producer at the Golden Melody Awards, sometimes called the Grammys of the Chinese-speaking world.

In an unmistakable Australian accent, he tells TIME that he is also trying to form a satirical band with other authoritarian leader lookalikes, which he wants to call The Tyrants. “I need a Mohammed bin Salman,” he says, before pausing to ask his hairdresser, “can you make it flatter there, just a little bit,” while scrutinizing his new haircut in the mirror.

Howard X makes it clear that he imitates the Supreme Leader to satirize him, not to glorify him. “When you have the face of a dictator, it sends a powerful message,” he says, and that can be used to bring attention to injustice. During the 2014 Occupy Central movement in Hong Kong he visited students protesting for democratic elections in the city with a sign that read, “No North Korea style elections in Hong Kong.” He hoped to draw some media attention to the student’s cause. “Humor is a very powerful weapon,” he says.

“The real Kim Jung Un would have killed you and your family if you messed up,” he stops to tell his hairdresser, grinning, once he’s satisfied with his new hairdo.

Here’s what Howard X had to say about his recent deportation and life as a dictator’s double.

Why did you decide to go to Hanoi?

What would you say if you ever met the real Kim Jung Un?

Please change that horrible haircut. Number two, get a stylist. And three, lose some weight, because I can’t catch up. For the sake of both of our lives Kim, please lose the weight.

What is the funniest thing that happened to you while pretending to be Kim?

I got into the Grammys and met Katy Perry in person because they thought I was the actor that played him in The Interview. I was impersonating the impersonator.

Do you think the real Kim knows about you?

I’m sure the real Kim Jung Un knows about me because I’ve been annoying him for the last five years or so. I’d be pretty disappointed if he didn’t know about me.

What does your mom think about your job?

I think my mom has taken out a life insurance policy on me, just in case I get murdered.

What’s the stickiest situation you have gotten into as an impersonator?

The most infamous and most dangerous stunt…was visiting the North Korean cheerleaders at the PyeongChang Winter Olympics in 2018. It was Valentine’s Day and I thought ‘Wow I need to go meet them, maybe I’ll get lucky.’

The North Korean agents did not see a funny side to my impersonation. I was physically assaulted. They kicked my leg. I suspect they were North Koreans just from the way they were dressed, I’ve never seen any South Korean man dressed so unfashionably.

Would you ever try to visit North Korea?

I would never go to North Korea because I wouldn’t come back. Well, alive, that is.

Can you tell us more about what happened in Hanoi?

They didn’t want more than one Kim in Hanoi so I had to go.

What I’ve heard is that the reason why the Donald Trump impersonator got to stay and I had to go was because it was North Korea who made the request for the Vietnamese government to do something about me. Donald Trump, as bad as he is, he still has a sense of humor, but dictators don’t.

What do you think of the real Kim Jung Un?

He comes off to me like a real gangster-like figure. He killed his uncle in such spectacular fashion. I think he was killed by an anti-aircraft missile, so that was pretty extreme. And the fact that he killed his half-brother in Malaysia shows that he’s very ruthless and he’ll do anything to stay in power.

And obviously, he doesn’t have a sense of humor.

What are your hobbies?

Apart from music? Food and women. I love Argentinean meat and Japanese food.

Any plans to retire your Kim Jung Un impersonating?

He’s a dictator, he’s president for life, so I have a very long career unlike other impersonators who do Trump or other countries. But who knows, Trump might be the last President. 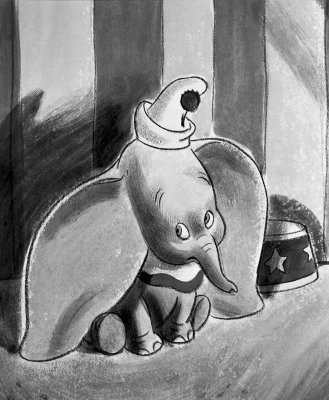 How Dumbo Almost Ended Up on the Cover of TIME
Next Up: Editor's Pick