A second set of audio recordings has surfaced of Fox News Host Tucker Carlson purportedly making offensive comments on a radio program between 2006 and 2011, released by U.S. non-profit Media Matters a day after the same site published audio of him using misogynistic language and seemingly condoning child rape.

In the recordings, published by the non-profit that calls itself a watchdog of “conservative misinformation in the U.S. media,” Carlson reportedly referred to Iraqis as “semiliterate primitive monkeys” and said they “don’t use toilet paper or forks.”

He said that immigrants to the U.S. should be “hot” or “really smart” and that white men “created civilization.”

Carlson also ridiculed former President Barack Obama. “I don’t know how black he is. How is he black?” he asked of Obama, adding he would “still be in the state Senate in Illinois if he were white,” in another audio clip.

In a separate post on their website, Media Matters released a clip of Carlson using homophobic language. “I mean that in a non-fag way,” Carlson said to the radio show’s host, after telling the host that he likes him.

At about the same time Media Matters released the second set of recordings, Carlson opened his nightly television show with a six-minute rebuke against “the great American outrage machine.” Carlson said that Fox supports him and declined to apologize for his comments.

Carlson, a conservative political commentator, was hired by Fox News in 2009 and has hosted Tucker Carlson Tonight since 2016.

It is not the first time Carlson has stirred controversy. Advertisers boycotted his show in late 2018 after he suggested that immigrants make America “poorer and dirtier and more divided.” 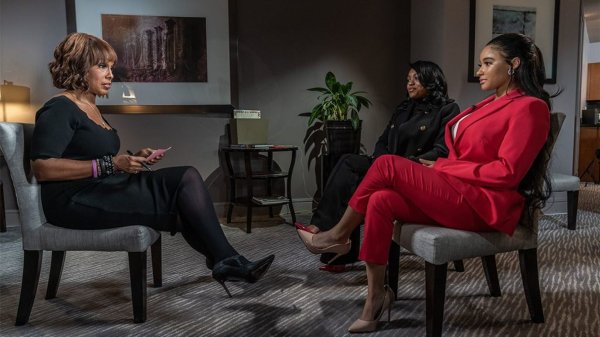 Gayle King Held R. Kelly's Feet to the Fire. But CBS Shouldn't Have Interviewed His 'Girlfriends'
Next Up: Editor's Pick