‘The Chinese Government Is at War With Faith.’ U.S. Official Denounces Religious Crackdown in China

U.S. diplomat Samuel Brownback denounced China’s treatment of the Uighur minority during a teleconference call Tuesday. Uighurs, a predominantly Muslim ethnic group, make up roughly 40% of the population of the northwestern province of Xinjiang. According to the U.N., an estimated 1 million Uighurs are being held in internment camps in Xinjiang.

“We have been putting out very clearly that this is a horrific situation that’s taking place in Xinjiang,” said Brownback, the U.S. Ambassador at Large for International Religious Freedom.

Brownback was speaking Tuesday from Taipei, the capital of Taiwan, where he is leading a regional conference on religious freedom to raise awareness of the issue.

In response to a question submitted by TIME, Brownback said that international pressure on China over their treatment of Uighurs is causing Beijing to change their approach.

“Initially they didn’t respond. Then they denied that it was taking place and then finally more recently settled on this idea that this is vocational training. They haven’t said that it’s involuntary vocational training,” he said. “All of these are completely unsatisfactory answers,” he added.

“It is past time in the year 2019 for the Chinese government to answer what it’s doing to its own people,” he continued. The ambassador said families of hundreds of people who have gone missing in the detainment camps have contacted him.

Brownback called for China to allow international observers to visit Xinjiang and for the release of individuals being held there. He mentioned that if China does not comply, the U.S. could invoke sanctions or enact the Global Magnitsky Act, legislation that allows the U.S. (as well as other countries, including Canada and E.U. member states) to put sanctions on individuals or organizations who are complicit in human rights abuses.

“The administration is serious about religious freedom matters and deeply concerned about what is taking place in China,” he said. U.S. lawmakers have repeatedly called for the Trump Administration to take firm action against China over its treatment of Muslims.

The conference in Taipei came after Brownback visited Hong Kong, where he gave a speech addressing wider religious repression by the Chinese government.

“Over the last few years, we have seen increasing Chinese government persecution of religious believers from many faiths and from all parts of the mainland,” he said at Hong Kong’s Foreign Correspondents Club on Friday, referring to growing religious repression against not just Muslims, but also Buddhists, Christians and the Falun Gong.

Referring to China’s claims that the Xinjiang camps help prevent terrorism, he said the “magnitude of these detentions is completely out of proportion to any real threat China faces from extremism.”

“Based on testimonies of survivors, it is clear that China’s misguided and cruel policies in Xinjiang are creating resentment, hatred, division, poverty and anger,” he added.

Concerning Buddhists in Tibet, Brownback said in the same speech that China is “likely to interfere with the selection of the next Dalai Lama” but that Tibetans “should be able to select, educate, and venerate their religious leaders without government interference”

He also addressed persecution of Christians in China, denouncing the government’s 2018 ban on online sales of the Bible. He also discussed the crackdown on underground churches and the detention of Christian religious leaders.

Since 1999, the U.S. government has designated China a “Country of Particular Concern” under the International Religious Freedom Act of 1998. 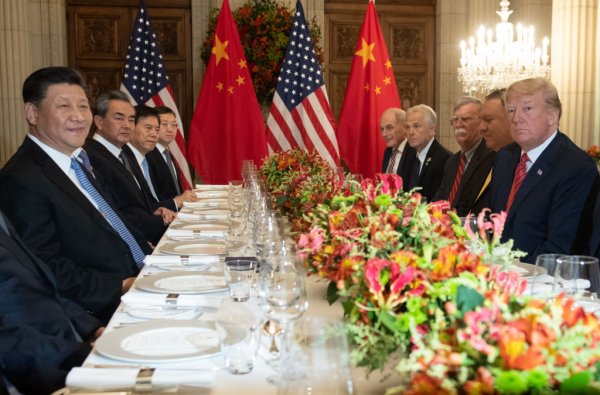 Trump and China's Xi Haven't Set a Date for Trade Summit
Next Up: Editor's Pick