'He's Not Worth It.' Pelosi Says She Opposes Impeaching President Trump Because It Would Divide the Country

Nancy Pelosi has said she opposes impeachment for President Donald Trump, saying any potential proceedings would divide the United States in a new interview with the Washington Post.

“I’m not for impeachment. This is news. I’m going to give you some news right now because I haven’t said this to any press person before,” the House Speaker said. “But since you asked, and I’ve been thinking about this: Impeachment is so divisive to the country that unless there’s something so compelling and overwhelming and bipartisan, I don’t think we should go down that path, because it divides the country.”

She added: “And he’s just not worth it.”

Pelosi’s comments mark the first time the House Speaker has come down hard against impeachment. She is speaking out as Special Counsel Robert Mueller is reportedly wrapping up his probe into Russian interference in the 2016 election. Pelosi has previously said she would wait for the results of Mueller’s report before making a decision on impeaching Trump.

The remarks quickly sparked criticism of Pelosi from liberals on social media. Her spokesperson tweeted a defense, telling critics to read Pelosi’s comments in full.

A recent poll has found that many Americans favor impeachment for Trump. About 48% of adults in the U.S. said Trump should be impeached, while 40% opposed it, according to a Reuters/Ipsos poll published March 8. Most Democrats favored impeachment, while most Republicans did not. 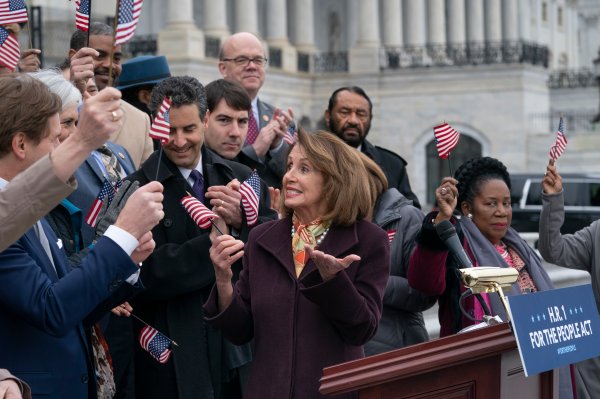 How Democrats Will Use 'Drain the Swamp' in 2020
Next Up: Editor's Pick