When Yumi Ishikawa, a 32-year-old model and actress, tweeted in January her belief that employers in Japan should not be allowed to require women to wear high heels to work, she didn’t expect to cause such a stir. But she seems to have struck a chord.

When she saw that her remarks had been retweeted thousands of times and comments were flooding in from other women whose feet and backs were aching, Ishikawa, who is also a writer, seized the momentum and created the hashtag #KuToo — a clever combination of the Japanese words for shoe (kutsu) and pain (kutsuu) with a gentle nod to the #MeToo movement.

While #MeToo has taken off in parts of Asia, notably finding its own unique forms in South Korea and China, the movement hasn’t quite had its moment in Japan. But a snowballing #KuToo campaign shows women in the country are pushing back against what they see as major inequality in the workplace. Following the surprise popularity of her comments, Ishikawa launched a petition on change.org calling on the country’s Ministry of Health, Labor and Welfare to explicitly forbid employers from requiring women to wear certain types of shoes.

“I thought, if there are so many people who feel the same, why not start some sort of movement,” Ishikawa tells TIME. It seems she did; as of this writing, her petition has gathered more than 14,000 signatures.

The campaign also ignited passionate online discourse, as many women began posting photos of bruises and blisters on their toes or detailing discomfort and pain. “It’s not about liking the shoes or not,” one Twitter user wrote. “I want this society to be one where people have the freedom to wear whatever shoes they like.” But others have pushed back, arguing that requiring women to wear heels is no different from requiring men to wear leather shoes.

The backlash in Japan over what some women view as unfair company policies about women’s workwear has parallels elsewhere in the world. British actress Nicola Thorp faced a storm of criticism in 2016 when she started a campaign asking the U.K. government to ban workplace policies that required women to wear heels after she was sent home from work for showing up in flats.

Thorp’s campaign ultimately did bring about change; her online petition was signed by more than 150,000 people, far exceeding the 10,000 signatures required to mandate a response from the government. A parliamentary committee tasked with investigating the complaint stated that company dress codes must be “reasonable,” including those dress codes that differentiate between what men and women must wear. The committee also found that some companies went far beyond mandating heels for women, some requiring them to periodically reapply make-up, wear revealing clothes and even dye their hair blonde.

“The fact that it has been an assumed part of life that women should wear an impractical item of clothing that damages your feet and back, is indicative of ingrained sexism and double standards,” Thorp tells TIME in an email. “In the U.K., most people were shocked that women were still being forced to wear high heels and make up at work. Men especially hadn’t really thought about it, and even women who wear heels every day in discomfort, hadn’t questioned the inequality of it before.”

In Japan, the conversation is just beginning, and change may be a long time coming. Since the start of her campaign, Ishikawa said she hasn’t received any response from private companies or from Japan’s Ministry of Health, Labor and Welfare. The ministry tells TIME in an email that the attire in workplaces is basically left to the discretion of companies. “In order to make sure that men and women enjoy equal opportunities and treatment, the Ministry of Health, Labor and Welfare strives to enforce the Equal Employment Opportunity Law and works to create a working environment where all people, including women, can work comfortably,” said the ministry.

Mari Miura, a professor of political science at Sophia University in Tokyo, said the popularity of #KuToo marks the first wide-scale pushback against deeply-held traditions about what women should look like in Japan’s workplaces. There may be more of a willingness to challenge gender inequality in Japan in the wake of a recent scandal over medical universities manipulating the scores of female applicants to lower their chances of acceptance, she said. “Before this, women had to be creative to make pumps more comfortable, like making new soles or shoe pads more cushy,” Miura told TIME by phone, “but this movement is saying that this is a social problem, not a women’s problem.” 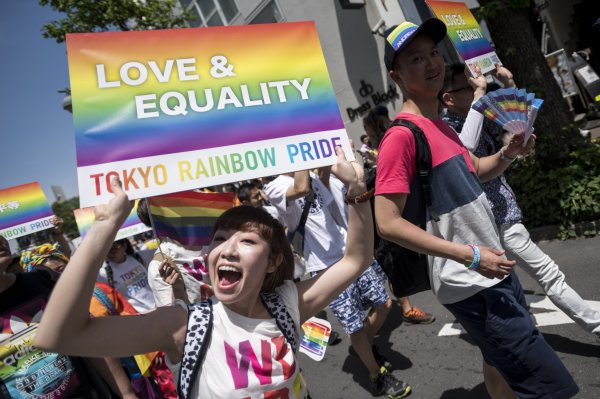 Japanese LGBT Couples to Sue for Marriage Equality
Next Up: Editor's Pick