A Guide to the Biggest Celebrity Superfans of March Madness

In the 80 years since the March Madness tournament started, it’s been a beloved and much-anticipated tradition for college basketball fans to fiercely rally for their favorite teams and celebrities are no exception.

For some, like actress Ashley Judd, being a super fan comes with longtime school spirit for her alma mater, the University of Kentucky, whose Wildcats are also a favorite for rapper Drake, who counts Coach John Calipari as a close friend and mentor. Others, like Bill Murray, don’t necessarily have an academic connection to a team, but an emotional one; Murray’s son, Luke, was an assistant coach for Xavier’s basketball program, which meant that the funnyman was a popular presence at Xavier games; for the 2019 NCAA Tournament, it appears that Murray will have to change teams, as Luke is now coaching at the University of Louisville.

Ahead of this year’s March Madness NCAA tournament, here’s a run-down of the most avid celebrity college basketball fans.

While many have said that Drake is a bandwagon fan for the of-the-moment teams, there’s no denying that the Canadian rapper is an avid fan of the Kentucky Wildcats. From receiving his own “Drizzy” championship ring when the team won the national championship in 2012 to a chummy friendship with Coach John Calipari that even lead Drake to be on Calipari’s podcast.

Julia Louis-Dreyfus has plenty of reasons to cheer on the Wildcats when it’s March Madness; not only did the Veep actress attend Northwestern and meet her husband there, her son Charlie currently plays on the basketball team.

Julianne Moore became a proud Davidson fan after her son Cal Freundlich joined the basketball team, playing the same position (point guard) that Warriors star Steph Curry played while he was at the college.

Perhaps the most famous longtime fan of the Wildcats, Judd has long been a welcome presence at the school’s games, where she faithfully cheers on her alma mater.

Jason Sudeikis grew up in Overland Park, Kansas, roots that have helped to make him a notable fan of Kansas sports, including the Kansas Jayhawks.

While the University of Kentucky might have some major star power from fans like Drake and Ashley Judd, Jennifer Lawrence brings the shine for the state’s other big team, the University of Louisville Cardinals. Lawrence, who grew up in Louisville, is a prominent fan of the team.

Bill Murray was a proud fan of the Xavier Musketeers, becoming one of their most prominent and popular game attendees while his son Luke was an assistant coach at the college. However, this year, Luke will be coaching at the University of Louisville, which makes many believe that Murray will now be a staunch Cardinals fan.

Although Paul Rudd was born in New Jersey, he grew up on Overland Park, Kansas and even attended the University of Kansas, making him a Jayhawks fan for life.

Apple CEO Tim Cook attended Duke for business school and is such a big fan of their basketball program that he used an Apple presentation to troll longtime Duke rival UNC.

Matthew McConaughey attended the University of Texas, making him a longtime fan of the Longhorns; however, he recently became the university’s basketball arena’s self-proclaimed “Minister of Culture.” While the duties that come with this title are still a little dubious, McConaughey seems to be taking the role pretty seriously, going so far as to hype players during a game earlier this year, all while clad in a suit in the same hue as the school’s trademark orange.

Ashton Kutcher was born in Cedar Rapids and later attended the University of Iowa, making it easy for him to become loyal Hawkeyes fan.

Seth Meyers is such a big fan of his alma mater’s sports teams that he often works in references to them in his comedic material.

John Legend is a native of Springfield, Ohio and is not shy when it comes to sharing his super fandom for the Ohio State Buckeyes. 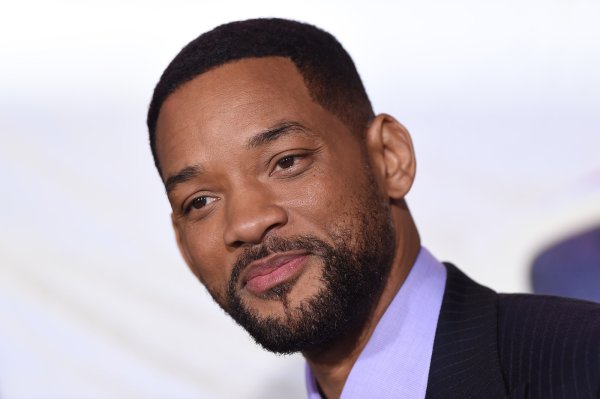 A Reminder That No One Enjoys St. Patrick's Day More Than Will Smith
Next Up: Editor's Pick