The U.K. Might 'Never Leave' the E.U. If Deal Doesn't Pass, Theresa May Says

British Prime Minister Theresa May warned Friday that the U.K. may “never leave the E.U. at all” if lawmakers refuse to back her Brexit deal in a crucial vote next week.

With just three weeks to go until March 29, when Britain is scheduled to leave the bloc, the country still has no agreement with the E.U., and is set on a default course of a “no deal” Brexit, which economists have warned would be disastrous.

The last time lawmakers voted on May’s deal, in January, her government suffered the biggest defeat in modern parliamentary history, by 432 votes to 202, with scores of May’s own lawmakers defying her.

In the ensuing two months, May has attempted to secure modifications to her deal in order to appease those critical lawmakers. But the E.U. has stood firm and refused to change the most contentious aspect of the agreement, the so-called Irish backstop. Most analysts believe, therefore, that lawmakers will again reject May’s deal when it comes to a vote on Tuesday.

May’s Friday warning, made in a speech in the northern seaside town of Grimsby (where 71% voted to leave the E.U. at the referendum in 2016), was intended to increase pressure on lawmakers in spite of the lack of movement, by raising the possibility of Brexit being delayed, or worse, cancelled.

“Next week, Members of Parliament in Westminster face a crucial choice,” May said. “Whether to back the Brexit deal – or to reject it. Back it and the U.K. will leave the European Union. Reject it and no one knows what will happen. We may not leave the E.U. for many months. We may leave without the protections that the deal provides. We may never leave at all.”

May also raised the possibility of a second Brexit referendum, which the U.K.’s opposition Labour Party recently adopted as its official policy. Taking that route would “take the U.K. right back to square one,” May said. Then, repeating her threat, she added: “If we go down that road, we might never leave the E.U. at all.”

If lawmakers do reject May’s deal again on Tuesday, she will be forced into another vote, where lawmakers decide whether to give their “explicit consent” to continue with a no-deal Brexit.

If lawmakers reject a no-deal Brexit, a third vote will be triggered, this time on whether to delay Brexit beyond March 29, by up to three months. 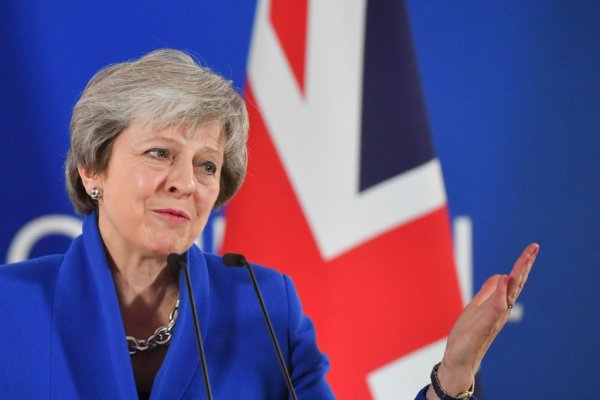 What Next for Brexit: Britain Plays the Ultimate Game of ‘Deal or No Deal’
Next Up: Editor's Pick