Canada’s Justin Trudeau is Facing a Divisive Political Scandal. Can He Survive?

Canadian Prime Minister Justin Trudeau has denied any impropriety in relation to a political scandal that has divided his government and threatened his political future, blaming an “erosion of trust” for the controversy.

Appearing on Canadian television on Thursday to defend his actions to the nation, Trudeau said he had “taken and will continue to take many lessons from these recent days and weeks” but didn’t apologize.

The scandal embroiling Trudeau, who was elected on a platform of transparency, erupted a month ago when Canadian newspaper Globe and Mail published an explosive story that said the Office of Prime Minister Justin Trudeau was being accused of interfering in a corruption case against a prominent engineering company. Trudeau argued that he and his aides had not acted inappropriately but had instead moved to preserve Canadian jobs.

In the past weeks, two cabinet members – Jody Wilson-Raybould, the former minister of justice and attorney general, and Jane Philpot, the treasury board president – spoke out against the office’s conduct and announced their resignations.

Canada is facing an election next fall, and it remains uncertain whether Trudeau will keep his seat – and whether his party will maintain parliamentary control. Trudeau has denied interfering in the legal case, and has maintained that he spoke to the cabinet member Wilson-Raybould about it because he was worried that the country could lose thousands of jobs.

To better understand the scandal, TIME spoke to two experts on Canadian politics: Daniel Béland, the director of McGill Institute for the Study of Canada, David Moscrop, a political theorist from the University of Ottawa.

Here’s what you need to know about the scandal the could change the course of the next Canadian federal election.

Justin Trudeau and his aides have been accused of putting pressure on a cabinet member to stop pursuing a legal case against a Quebec engineering company, SNC-Lavalin.

Jody Wilson-Raybould, who held the joint cabinet position of minister of justice and attorney general, has said that in fall 2018, she was pressured to let go of a case against SNC-Lavalin. The company is facing corruption charges for giving Libyan officials US$38 million to secure contracts, according to the BBC.

“The story is really about potential interference with the rule of law, the role of the attorney general,” says Béland.

Wilson-Raybould was later moved to a new position as the Minister of Veterans Affairs and Associate Minister of National Defence, the CBC reported on Jan. 14. She resigned less than a month later.

About two weeks after she resigned, Wilson-Raybould testified before the House of Commons justice committee, accusing Trudeau and his aids of trying to interfere in the judicial system.

“I experienced a consistent and sustained effort by many people within the government to seek to politically interfere,” she said during her Feb. 27 testimony, adding that she felt that she had faced “veiled threats.”

A second cabinet minister, Treasury Board President Jane Philpott, resigned in protest of the treatment of Wilson-Raybould. In a letter, she cited having “serious concerns” about interference in the judicial system, according to the BBC.

One of Trudeau’s aides, former principal secretary Gerald Butts, also resigned during the scandal. In an address to the House of Commons justice committee on Wednesday, he denied that Trudeau had ever pressured Wilson-Raybould, but had instead requested that she take the potential job losses that could result from the case into consideration.

“We felt that outside advice was appropriate because of the extraordinary circumstances,” Butts said, according to Bloomberg. “We also made clear that if the attorney general accepted our proposal and took external advice, she was equally free to reject that advice.”

How has Trudeau responded?

Trudeau has denied inappropriately pressuring Wilson-Raybould. He has argued that the government felt concerned that the country could lose 9,000 jobs if the company, SNC-Lavalin wasn’t offered a remediation agreement, according to Canadian news magazine Maclean’s.

Trudeau canceled public events this week in the wake of the scandal and returned to Ottawa for private meetings, The Globe and Mail reported.

Trudeau’s support of the Quebec-based company has been applauded in the province.

“I and my staff always acted appropriately and professionally,” he said in Montreal on Wednesday. “Our government will always focus on jobs and our economy.”

In a nationally televised news conference on Thursday, he said that there had been an “erosion of trust” between his office, Wilson-Raybould and Philpott, according to a translation by Maclean’s.

“It is our job as parliamentarians to defend the interests of the communities we were elected to represent,” Trudeau said during the conference. “To be the voice of those communities in Ottawa. I stressed the importance of protecting Canadian jobs and re-iterated that this issue was one of significant national importance.”

Why is this a big deal?

In Béland’s view, the scandal stands out because Canada has relatively few corruption scandals. It is perceived by experts as the 9th most transparent country in the world, according to Transparency International.

“The threshold of tolerance is lower because we have higher standards for our country,” says Béland. “We demand a lot from officials, and we need to make sure that the justice is independent.”

Since his campaign, Trudeau has built a reputation as a reformer in Canadian politics, who supports political openness, indigenous rights and feminism. The scandal may have irrevocably damaged that image, says Moscrop.

In Canada, it’s very unusual both for lawmakers to speak out against a prime minister who belongs to their own political party, and for two cabinet members to resign in protest, says Moscrop.

At the same time, Moscrop says it doesn’t appear that Trudeau broke the law. While the Conservative party has pressed the RCMP- the Canadian police – to investigate the case, Wilson-Raybould herself has said that she doesn’t believe Trudeau acted illegally.

While the scandal is “notable,” says Moscrop, “It doesn’t involve personal enrichment. It doesn’t involve extraordinary violations of norms. It’s not Watergate, it’s not the Mueller report. It represents, I think, a series of miscommunications and ethical lapses, but it appears that no law was broken. That’s pretty critically important to this whole thing.”

The scandal is also striking because it tarnishes the squeaky-clean image that Trudeau has promoted, says Béland.

“He framed himself as someone who would change politics,” says Béland.“’I will do politics differently, it will be egalitarian, it will be open, it will be transparent.’ And now many people are saying, well, he’s a politician like any other.”

Béland says that the story also looks bad because Trudeau has positioned himself as a feminist and pro-indigenous rights – and Wilson-Raybould is both an indigenous person and a woman.

“If he had not focused so much on these issues, this might not have looked as damaging for him,” Béland says.

What’s next for Trudeau?

Both Moscrop and Béland agree that while things look challenging for Trudeau – who is facing an election in seven months – he may still have time to recover.

According to polling carried out by Canadian news service Global News from March 1 to 3, public opinion is concerning for both Trudeau and the Liberal Party. Trudeau would win 31% of the decided popular vote if the election was tomorrow, down three points from a few weeks ago, while the party leader of the Conservative party would win 40% A total of 67% of Canadians now say they believe Wilson-Raybould’s version of what happened.

“A lot of people express sympathy for Jody Wilson-Raybould, or certainly, a lot of people thought her testimony was credible, so I think it’s a challenge for the prime minister,” Béland says.

However, Moscrop and Béland argue that Trudeau might be able to change the national conversation.

Béland says that the strength of the economy may bolster Trudeau’s case.

“There’s still time for them to bounce back in the polls if they find a way to frame this,” says Béland. “People in Canada… are interested in the rule of law and justice issues, but they’re also interested in jobs, in the economy and typically voters are driven by these issues.”

Moscrop says that Trudeau may need to reevaluate the way he presents himself to voters, now that the image that he had constructed – as a reformer who stood up for women’s and indigenous rights – has been tarnished.

“It’s going to make it hard to run under that banner again, because of the implications of this but also because of the symbolism of this,” says Moscrop. 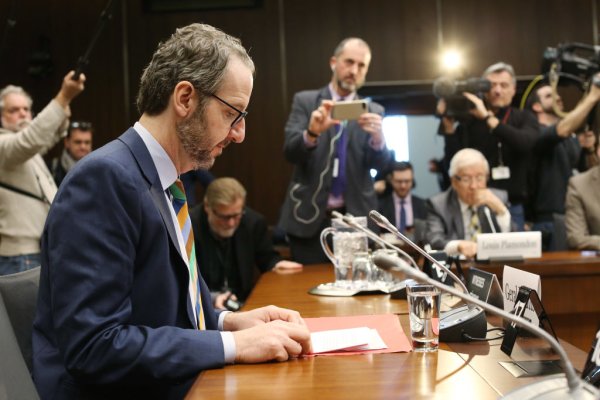 Justin Trudeau's Former Aide Just Defended Him on Canadian TV. Here's What He Said About the Growing Scandal
Next Up: Editor's Pick