Google Doodle Celebrates Mathematician Olga Ladyzhenskaya: 'One of the Most Influential Thinkers of Her Generation'

Google celebrated Russian mathematician Olga Ladyzhenskaya on Thursday March 7, 2019 with a Google Doodle. It would have been her 97th birthday
math.ru/Creative Commons
By Madeline Roache

Russian mathematician Olga Ladyzhenskaya overcame personal and political hurdles and had a lasting impact on a range of scientific fields, from weather forecasting to cardiovascular science and oceanography.

On Thursday Google celebrated her life and achievements with a Google Doodle on what would have been her 97th birthday.

Ladyzhenskaya was best known for her studies on partial differential equations. Marshall Slemrod, a mathematician with the University of Wisconsin, told the New York Times, “If you believe your weather forecasts, you have to solve the exact equations that she studied.”

Google called her “one of the most influential thinkers of her generation.”

Born in the rural town of Kologriv, more than 400 miles from Moscow, Ladyzhenskaya inherited a love for algebra from her father, a mathematician who came from Russian nobility. When she was 15, personal tragedy struck as her father was executed by the Soviet authorities, who called him an “enemy of the state.” Her mother and sister sold dresses, shoes and soap to put food on the table.

This is the Google Doodle for Olga Ladyzhenskaya. Her work had a lasting impact on a range of scientific fields, from weather forecasting to cardiovascular science and oceanography.
Google

Despite earning a place at Leningrad State University with her impressive school grades, Ladyzhenskaya was banned from attending because of her father’s “enemy” status.

After years of teaching math in an orphanage and high schools, she was eventually given spot at Moscow State University in 1943, where she earned her Ph.D. Ladyzhenskaya later went onto head the Laboratory of Mathematical Physics at the Steklov Mathematical Institute, and to author more than 250 papers. In 1990, she became the head of the St. Petersburg Mathematical Society, after being a member for 39 years.

In recognition of her impressive contribution to mathematics, Ladyzhenskaya was awarded the Lomonosov Gold Medal by the Russian Academy of Sciences in 2002.

Much like her dissident father, she did not shy away from publicly criticizing the oppressive Soviet regime, often risking her safety. With her love for literature, Ladyzhenskaya befriended outspoken political critics Alexander Solzhenytsin and Anna Akhmatova.

Even after the collapse of the Soviet Union in 1991 and economic woes that followed, Ladyzhenskaya elected to stay in her motherland. She died on Jan. 12, 2004 in St. Petersburg at the age of 81. 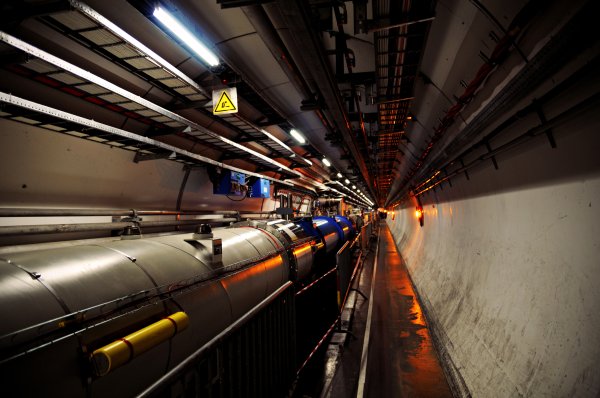 Google Street View Now Lets You Take a Walk Around the Large Hadron Collider
Next Up: Editor's Pick