A PLA Navy fleet including the aircraft carrier Liaoning, submarines, vessels and fighter jets take part in a review in the South China Sea on April 12, 2018.
VCG/Getty Images
By Derek Wallbank / Bloomberg

The U.S. has observed a rise in Chinese military activity in the South China Sea area over the last year, according to the top American military officer in the region.

Admiral Philip Davidson, the commander of U.S. Indo-Pacific Command, declined to quantify the increased activity — nor would he say whether the number of U.S. freedom of navigation patrols would increase or remain stable. He did, however, underscore the American resolve to remain engaged, describing the U.S. as an “enduring Pacific power.”

“It’s building, it’s not reducing in any sense of the word,” Davidson told reporters on Thursday in Singapore when asked about China’s military activities in the South China Sea. “There has been more activity with ships, fighters and bombers over the last year than in previous years, absolutely.”

“It’s a hazard to trade flows, the commercial activity, the financial information that flows on cables under the South China Sea, writ large,” Davidson added.

Davidson’s comments are the latest from a senior U.S. official seeking to reassure allies in Southeast Asia of the American commitment to what Washington refers to as the Indo-Pacific region. Secretary of State Michael Pompeo last week in Manila assured the Philippines that a defense treaty would apply if its vessels or planes are attacked in the South China Sea.

That reassurance hasn’t stemmed all concerns, however.

Top Philippine officials have clashed over whether the mutual defense pact with the U.S. needs to be changed. While Foreign Secretary Teodoro Locsin has said the 1951 accord should stay the same, Defense Secretary Delfin Lorenzana wants it reviewed, even after Pompeo’s assurances.

The U.S. hasn’t stopped Chinese “aggressive actions” so far, Lorenzana noted in a statement earlier this week, while warning that vagueness in the document could cause “chaos during a crisis” and that the Philippines didn’t want to be dragged into a shooting war it didn’t start.

China has targeted a 7.5 percent increase in defense spending in 2019, a slowdown from last year’s projected 8.1 percent increase though still seen as consistent with President Xi Jinping’s plans to grow and advance the military.

Davidson said he sees no sign of a slowdown in China’s defense capabilities, despite the reduced growth trajectory. More spending, he said, was still an increase. 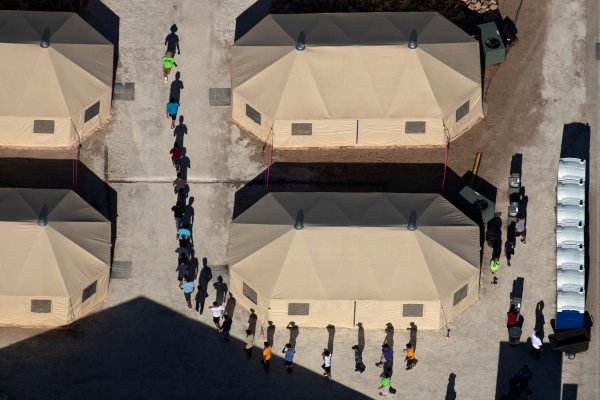 Trump Administration Will Ask Military to Shelter Up to 5,000 Migrant Children
Next Up: Editor's Pick