Nintendo announced a new kit that will bring basic VR technology to its Switch console.
Supplied/Nintendo
By Patrick Lucas Austin

If you thought Nintendo was done pairing its cardboard Labo accessories with its hybrid Switch console, you’re in for a surprise. On Wednesday night, Nintendo announced its Nintendo Labo: VR Kit, the fourth in its Labo series of DIY Switch accessories, and the first to bring what Nintendo is calling “basic VR technology” to the platform.

While rumors of a Nintendo Switch VR accessory have been circulating for over a year, perceived technical limitations of the Switch made it seem more pipe dream than potential product. But by pairing a seemingly less intensive VR experience with its cardboard DIY accessories, the company may have discovered a way to circumvent the hefty processing requirements associated with today’s VR-capable machines.

“This new kit builds on the core tenets of Nintendo Labo – Make, Play and Discover – to introduce virtual reality in a way that’s fun and approachable for both kids and kids at heart,” said Doug Bowser, Nintendo of America’s Senior Vice President of Sales and Marketing. “We wanted to design an experience that encourages both virtual and real-world interactions among players through passing around Toy-Con creations.”

The complete Labo: VR Kit will cost $79.99, and include six different “Toy-Con” projects: VR Goggles, Blaster, Camera, Bird, Wind Pedal and Elephant, all of which are made of cardboard. A smaller Labo: VR Starter Set + Blaster will include the VR Goggles and Blaster Toy-Con, and sell for $39.99.

Two expansion sets, comprising the Elephant, Camera, Bird and Wind Pedal Toy-Con projects, will also be available for $19.99 each.

While sticking your head inside a pair of VR goggles isn’t exactly a social event, Nintendo suggests a more social gathering might be the optimal way to experience the kit. “Nintendo Labo: VR Kit encourages passing around the Toy-Con creations among a group of people so everyone in the room can easily join in on the fun,” the company said in its announcement post. “To help encourage this social gameplay, players simply slip the Nintendo Switch console into the Toy-Con VR Goggles and hold it up to their eyes to explore numerous games and experiences – no head strap needed.”

Switch owners familiar with Labo’s Toy-Con Garage mode will be able to experiment with the software’s programming tools and take advantage of the additional accessories to make their own custom games and programs. Both the Labo: VR Kit Starter Set + Blaster and the fully equipped Labo: VR Kit will be available online and in stores on April 12. 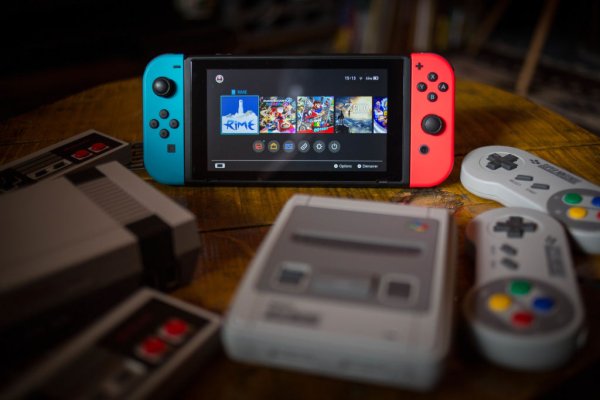 How Nintendo's Embrace of Indie Games Is Helping the Switch Win Big
Next Up: Editor's Pick