Attendees and models alike were moved to tears at the Fall/Winter 2019 RTW Chanel fashion show on Tuesday during Paris Fashion Week. The runway show was the last show created by Karl Lagerfeld, Chanel’s longtime creative director and a fashion industry legend in his own right, who died in February at the age of 85.

The show, which took place in Chanel’s traditional venue, the Grand Palais, was set in a fantastical winter wonderland, complete with luxurious chalets and fresh powdery “snow,” the final of the dramatic, theatrical shows that Lagerfeld was famous for staging for Chanel. Lagerfeld’s favorite models, including Kaia Gerber and Cara Delevigne, who opened the show, walked down the snowy catwalk, while actress Penelope Cruz made a surprise cameo closing out the show in fluffy white look fit for a snow angel, holding a single white rose. The front rows of the show were filled with Lagerfeld’s famous fans and past collaborators, including models Naomi Campbell, Claudia Schiffer and Karen Elson and celebrities like Kristen Stewart and Janelle Monae.

Tributes to the late designer were omni-present in the show; the presentation’s notes featured a Lagerfeld illustration of him and Gabrielle “Coco” Chanel, while the show reportedly started with a moment of silence for Lagerfeld. After the show began, a recording of Lagerfeld thinking back on his accepting his appointment to Chanel played, including a memory of the Queen of England complimenting his work. After the final walk, where models walked to David Bowie’s “Heroes,” Vogue editor-in-chief Anna Wintour led a standing ovation for the show, while models and attendees were seen visibly mourning Lagerfeld at his final show. 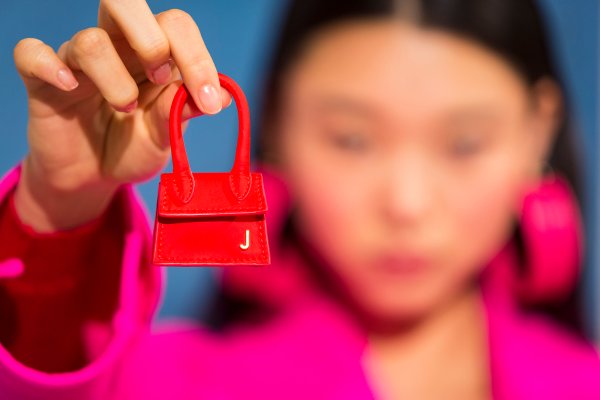 A French Fashion Designer Created a Tiny 2-Inch Handbag Because Good Things Come in Small Packages
Next Up: Editor's Pick