Luke Perry Was the Perfect Throwback Idol for a Nostalgic Era

When I heard that Luke Perry had died, my immediate thought was: “Not Dylan!” That may sound like a minimization of the legacy left by the 52-year-old actor and father of two, who passed on Monday after suffering a massive stroke last week. But it’s really a testament to the indelibility of his decade-spanning performance as Beverly Hills, 90210‘s brooding Dylan McKay—a character who seemed to be everywhere during my early-millennial childhood, and whose mystique feels timeless even as the era-defining ’90s teen soap he helped anchor grows ever more dated.

That isn’t so surprising when you consider that he was always a throwback. Surrounded by L.A. airheads like Steve Sanders and Donna Martin, Dylan was the motorcycle-riding teen rebel whose storylines of addiction and family upheaval brought depth to scripts that leaned heavily on rich-kid rivalries. With the exception of the epic Brenda-Dylan-Kelly love triangle that drove early seasons, he wrestled with his own psychological demons rather than wasting time on petty high-school drama.

Like his favorite hangout, ’50s diner the Peach Pit, Perry’s surfer-slacker Dylan was a classic updated for the ’90s. Though greaser styling heightened his startling resemblance to James Dean, it was the haunted quality the actor shared with that ur-teen idol that made Beverly Hills’ own rebel without a cause believable. Perry was 24 when 90210 premiered; not many actors that age could have done justice to such an old soul, let alone one whose arc featured so many absurd twists. That bad-boy-with-a-heart-of-gold archetype has been a staple of TV’s teen dramas—and a magnet for tween crushes—ever since, reappearing first in vampire Spike on Buffy the Vampire Slayer and tortured writer Jess on Gilmore Girls. In the 21st century, Dylan was reborn in Gossip Girl‘s reformed lothario Chuck Bass and the gang scion Jughead Jones of Riverdale, the CW series on which Perry gave a warm, self-aware performance as the single father of Archie Comics hero Archie Andrews.

His best-known roles might suggest a lack of range, and it’s true that his elegantly weathered features and tortured mien never became incidental to his appeal. But despite bookending his career with two zeitgeist-y shows about high schoolers, Perry challenged himself more—and got better work—than any other 90210 alum. And a lot of the time he succeeded. If he was a bit flat as a slimy surfing promoter in Deadwood creator David Milch’s short-lived HBO show John From Cincinnati, his sharp portrayal of a crooked preacher on one of the first modern “prestige” dramas, Oz, proved his versatility.

It should be fascinating, as well, to watch his final performance as Western star Wayne Maunder in Quentin Tarantino’s upcoming Charles Manson film Once Upon a Time in Hollywood. There were certainly some cowboy flourishes in his dry, stoic onscreen persona, just as there were in Dean’s angsty oeuvre. Rather than disappearing into their roles, both actors seemed to embody American individualism at its most self-destructive; Perry just had a smaller screen to fill. He never got the chance to leave a movie-star legacy, but—for those of us who grew up on 90210, at least—he’s an icon nonetheless. 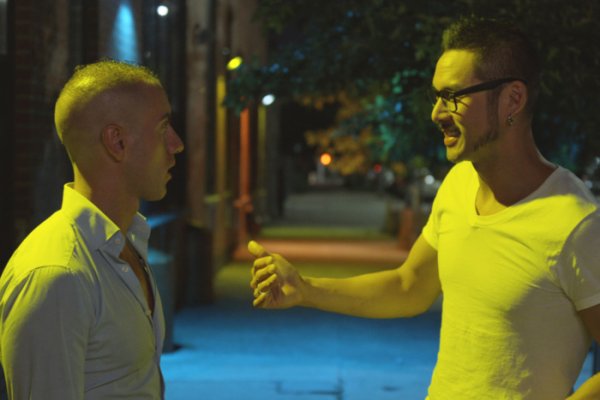 An Interview with Lex From Netflix's Dating Around
Next Up: Editor's Pick