Press conference by Juan Guaido, self-proclaimed president of Venezuela, at the Palacio San Martín in Buenos Aires on March 1, 2019 as part of his visit to Argentina after traveling to Colombia, Brazil and Paraguay.
Matías Baglietto—NurPhoto/Getty Images
By Bloomberg

Juan Guaido’s first stop after he skipped out of Venezuela last week was Colombia. But after he failed to push food and medicine across the borders to hasten the end of autocratic President Nicolas Maduro’s rule, he headed to Brazil.

He was in Argentina Friday following meetings in Paraguay, and is heading to Ecuador today to be received by President Lenin Moreno. Peru’s President Martin Viscarra has also invited Guaido to Lima, according to the deputy foreign minister.

The opposition leader insists he’ll be home soon, but his lengthening regional tour raises questions about just how and when he intends to get back to Caracas. Guaido, head of the opposition-dominated National Assembly, risks not only being blocked from re-entering Venezuela, but being tossed into jail after violating a foreign-travel ban. Meanwhile, the amnesty he promised military officers who join him languishes in his own legislature and resurgent street protests have lost their focal point.

The U.S., which along with some 50 other nations recognizes Guaido as Venezuela’s rightful leader after sham elections, has threatened severe repercussions if Maduro takes direct action against his chief rival. Still, Venezuela’s ruling socialists have already exiled and thrown hundreds of dissidents behind bars.

Guaido, a 35-year-old congressman, says his tour is meant to deepen ties with allies and plan how to defeat a dictatorship. Yet the longer he stays abroad, the more the likelihood that his movement to unseat Maduro will lose momentum after the effort to bring humanitarian aid into Venezuela was brutally crushed last week.

“We will be back in Caracas very soon to continue the work we swore to do for all of Venezuela,” he said in Asuncion following a closed door meeting with President Mario Abdo Benitez.

Later Friday, Guaido flew to Argentina where he was received by President Mauricio Macri. Following a roughly 30-minute meeting with Argentina’s leader, Guaido again said he’d return home in the coming days and that the National Assembly on Saturday would announce dates for protests against the government. He also addressed another concern.

“Intervention in Venezuela is not like delivering a pizza, it takes much responsibility,” Guaido said. “Nobody wants the use of force.”

Guaido is analyzing the effect of a potential jailing, while the government considers the repercussions of throwing him behind bars, said Felix Seijas, head of the Caracas polling firm Delphos.

“For the government, the best case scenario is that Guaido doesn’t return,” Seijas said. In visiting allies, “Guaido is trying to raise the stakes of being imprisoned.”

Guaido told the news agency Infobae on Saturday that his arrest in Venezuela would lead to a “popular uprising.”

Yet, the opposition had billed last Saturday as a day that would break Maduro’s grip by ushering aid into a hungry nation. But still-loyal police and soldiers repelled thousands of activists moving food and medicine stockpiled at international crossings, heeding the Maduro government warning that the effort was the precursor to an invasion.

They set loose volleys of tear gas, plastic pellets and bullets, killing at least four, injuring hundreds and leaving Guaido stuck outside his country. On Friday, the Trump administration sanctioned six security officers “in response to the reprehensible violence, tragic deaths, and unconscionable torching of food and medicine destined for sick and starving Venezuelans,” Treasury Secretary Steven Mnuchin said in a statement.

More than 500 members of the security forces have deserted to Colombia since Saturday, but not a single high-ranking officer who commands troops has switched sides. Further complicating matters, a bill to give members of the military amnesty for corruption and rights abuses if they defect has stalled in Guaido’s own National Assembly amid a backlash from hard-line lawmakers who say it’s too forgiving.

As Guaido travels, the regime has extended carnival holidays, urging Venezuelans to leave the cities for the beach. Guaido, meanwhile, says he will rally supporters when he arrives and is promising to announce another wave of protests.

“We will continue to occupy the streets of Venezuela despite the threats to our lives,” he said in Asuncion. 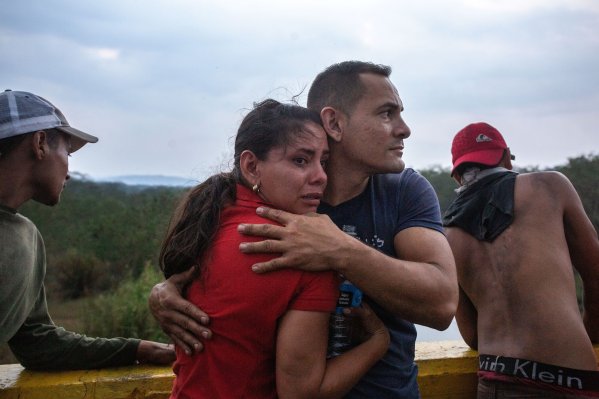 Venezuela's Crisis Reaches a Stalemate, but Time Is Running Out for the Opposition
Next Up: Editor's Pick