The Quick Read on the Trump-Kim Summit in Hanoi

A certain U.S. President and a certain North Korean leader met in Vietnam this week to make progress towards denuclearization and thawing relations between the two countries. They did not make progress on either of those fronts, and the summit in Hanoi ended abruptly without any agreement.

The fact that nuclear weapons are involved makes this particularly important. But beyond that, people worried President Donald Trump would give away the store without getting anything in return (a fear compounded by the Michael Cohen congressional hearings on Wednesday that gave Trump even more incentive to change the media narrative) can now breathe a big sigh of relief.

But while all the headlines you will read this week will declare the Hanoi summit a failure (and with a certain amount of smugness to boot), the truth is that there’s a far smaller threat of escalation on the North Korea issue now than when Trump began his diplomatic outreach to Kim Jong Un. South Korea now has new and more stable relations with Pyongyang.

And the U.S. President still has a better chance of achieving a breakthrough with North Korea than any of his predecessors. Trump still wants to make a deal with Kim, and that desire aligns nicely with his desire to spend less money protecting allies in Asia, as we saw by his decision to suspend military exercises last year.

None of his predecessors would have ever done that, likely seeing it as a “give” without anything in return. Trump saw it as an opportunity to spend less money and jumped at it. And most Presidents wouldn’t have even met with Kim without concrete concessions on the table. For Trump, meeting Kim was an opportunity to showoff his deal-making skills. The mere fact that Trump doesn’t view these American moves as “giveaways” give him much more space for achieving a legitimate breakthrough than any who have come before him, even if the prospects for that breakthrough remain small.

The abrupt end to the summit is unlikely to heighten tensions between the U.S. and North Korea, as Trump went out of his way in the press conference afterward to highlight his good relationship with Kim and emphasize that dialogue between the two sides will continue. He also mentioned that Kim promised to stop ordering nuclear and missile tests, and said nothing of increasing American pressure against Pyongyang.

Beyond that, it’s not clear. Both sides will go back home and rethink their strategies vis-a-vis the other. Hawks in Japan and South Korea will use the failed summit and rumors that Trump has moved off his demand that North Korea completely denuclearize as a pretext to argue for strengthening their own nuclear capabilities, but are unlikely to get much traction at this point. South Korean President Moon Jae-in will face much more criticism at home from political opponents who always thought that he was too soft on Kim, and the lack of progress at this week’s summit will hit the planned increase in economic cooperation between the two Koreas.

Kim Jong Un reportedly wanted Donald Trump to lift all sanctions in exchange for less-than-complete denuclearization, which Trump balked at. Kim probably figured that Trump was so desperate to achieve a breakthrough in the shadow of the Cohen testimony that he overplayed his hand.

“Sometimes you have to walk.” – Donald Trump at the Hanoi press conference. Supporters of the President will be using this Hanoi summit as Exhibit A to demonstrate what a tough negotiator Trump is. His detractors will hold up the same Hanoi summit as proof that Trump is in way over his head when it comes to high-stakes, high-level foreign policy.

U.S.-Russia, U.S.-China and U.S.-North Korea will be the three key foreign relationships that will define the Trump presidency. While Trump is busy cultivating good relations with the leaders of these three countries, the reality is that U.S.-Russia relations are currently worse now that they were even under Obama given Russian election meddling. Meanwhile, too many Americans have too many interests to let Trump declare victory with China if Beijing doesn’t address the key structural issues China hawks rightfully take issue with (cyber attacks, IP theft, tech transfers, etc…). None of these are concerns with US-North Korea; if there is one relationship that Trump can improve through sheer force of will and a strong personal relationship with his political counterpart, it’s U.S.-North Korea.

Finally, Trump has his own personal Vietnam. 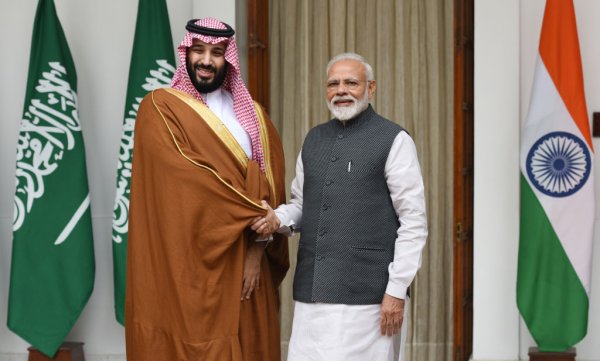 The Quick Read on MBS's Tour of Pakistan, India and China
Next Up: Editor's Pick