The Alabama Senator, who won a surprising electoral victory in 2017, on the Democratic field, the Klan and his chances of being re-elected

What does the Alabamian writer Rick Bragg mean when he says in the introduction to your new book, Bending Toward Justice, that there are too many ghosts in Alabama?

Just this month there was an editorial in an Alabama newspaper calling for the Klan to ride again. How can this be?

It’s like the ghost that appears in your worst nightmare. It comes to the front, and you realize that yes, we have gone very far, but we’ve got a ways to go. There are people in this state, and this country, that have feelings about race that are very, very strong.

Your book is about the bombing of the 16th Street Baptist Church in 1963, which resulted in the deaths of four girls, and your role in bringing some of the bombers to justice as a prosecutor. Why write a book about this now?

It’s important with cases like this to have a written history of how it all came together and how things have changed so people can look at it and understand it. Second, I think we are backsliding on civil rights and voting rights. We saw it in the courts with the Shelby County v. Holder decision [which struck down part of the 1965 Voting Rights Act], but we’re also seeing it in a broader sense.

A cynic might say that you’re publishing this book now to remind voters of your civil rights bona fides. Would you like to address that?

Well, yeah, I can see that. But this book has been in the works for a long time.

You won your Senate seat in a close special election against Roy Moore, a controversial figure facing sexual-assault allegations. Do the Republicans just have to nominate a normal person in 2020 to defeat you?

That underestimates the people of Alabama. It’s a fairly tribal state, but you’re basically saying to folks that they don’t think, and they’re not going to look at candidates. Anybody I run against is going to run so far to the right, they will essentially be a lapdog. There will be people who want that, but I just give the people a lot more credit.

Given that your time in public office may be short, why did you choose to make your first speech on the Senate floor about gun violence?

To bring attention to the fact that there are measures that we can do while we still respect the Second Amendment, with regard to background checks, the “boyfriend loophole” and reporting. I thought that message coming from a gun owner and an avid hunter might resonate more than the usual suspects’.

Do you think Donald Trump will be re-elected in 2020?

I think folks will underestimate him, simply because of the way he conducts himself. I do worry that there’s too many in the Democratic Party who think, “Oh, we can’t lose this.” Well, we can.

Do you have a favored candidate to beat him?

You’ve got to have a candidate that talks to the heartland of America. It’s no secret I think Joe Biden fits that bill better than anyone. We tried the chaos thing and I just don’t think it’s working. We’re looking for a transitional candidate, who respects the institutions of government, who believes they work for all people, not just himself.

Is it true, as your book’s intro claims, that you’re a terrible fisherman?

I love Rick Bragg, but he says some things that you just can’t rely on. There is an element of jealousy with him. 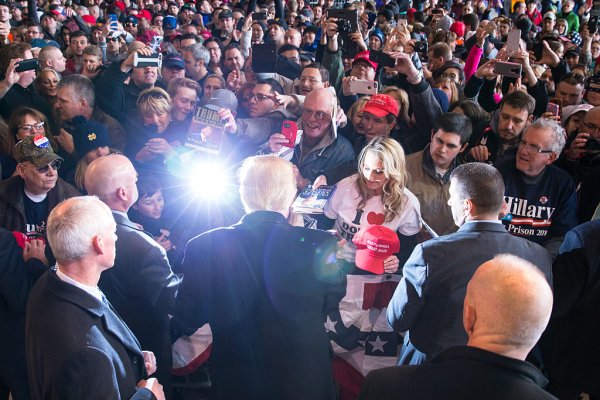 Security Expert: How to Stay Safe at Political Rallies
Next Up: Editor's Pick