Trump and Kim Just Met Again. Here's What the North Korean Leader Hopes to Get Out of the Talks

Life in Vietnam’s picturesque capital carried on this week as though the eyes of the world weren’t on it. Even the flags flapping from light posts along its tree-lined streets — Vietnam’s Communist star flanked by the U.S. and North Korea — are understated. Not too showy, just large enough to catch the eye with a spot of color while whizzing past on the back of a motorbike.

Hanoi is focused squarely on impressing two of its most distinguished guests: President Donald Trump and North Korean leader Kim Jong Un, who met in the city Wednesday night for the start of their second summit geared toward denuclearization of the Korean peninsula. Nearly five decades after it was targeted by a relentless American bombing campaign, Hanoi is a fitting peace-broker: both a symbol of rapprochement and a model of economic renaissance.

“I think you will have a tremendous future for your country, you’re a great leader,” Trump told Kim in their first meeting since Singapore as the pair posed for photos before a social dinner. He added that North Korea has “tremendous economic potential,” and pledged that the U.S. “will help it to happen.”

In talks on Thursday, Trump will try to convince Kim that prosperity awaits if he gives up his nuclear weapons, and Vietnam is a fitting model. The former American enemy is a Communist state that has seen rapid benefits from economic liberalization and diversified security partners. But in a worrying portent for American ally Seoul, Vietnam also achieved what the Kim regime has dreamed of doing for three generations: It absorbed its Western-allied southern half into a unified nation under Communist control.

When Trump and Kim met for an initial summit in Singapore last June, the first between the sitting leaders of these longtime foes, they only managed to reach a vague agreement that yielded little progress. Experts say four items are on Trump’s agenda this time around: a declaration of peace; returning the remains of more U.S. soldiers missing since the Korean War; establishment of liaison offices between the two countries; and an end to production of fissile materials at North Korea’s Yongbyon nuclear facility.

But what does Kim want in return?

A declaration of peace would undermine the argument that U.S. troops are still needed in the South, and he is likely to ask for a reduction of the 28,500 currently based there. Trump may try to meet Kim’s demand, after he became the first president since Jimmy Carter to suggest withdrawal last May.

The U.S. is technically still at war with the North since the 1950-53 Korean War ended with an armistice rather than a peace accord. A declaration of peace wouldn’t end the war, but it would pave the way for a formal treaty and ultimately dissolve the U.S.-led U.N. Command created to keep the peace. The U.S. also has some 50,000 troops based in Japan.

“If Trump is smart, he will tie [troop withdrawal] to specific benchmarks, which will require North Korea to meet certain steps, including providing an inventory of their nuclear arms, research, and missiles,” says Brett Bruen, a former White House director of global engagement under Barack Obama. The problem with that, he says, is that it is “likely to strike fear amongst our allies and reinforce the notion that the U.S. is abandoning its long-held role and guarantor of peace across the Pacific.”

Holding Onto His Weapons

After their summit in Singapore, Trump announced on Twitter that, “There is no longer a nuclear threat from North Korea,” which is false. While no one knows exactly how many weapons of mass destruction North Korea has, it is believed to have dozens of nuclear warheads and the means to deliver them to the continental United States. At the top of America’s wish list in negotiations is an inventory of assets, which experts say is not forthcoming.

“A full declaration of all nuclear and missile assets is highly unlikely at this point,” says Siegfried Hecker, a leading nuclear scientist at Stanford University. Furthermore, such a list would require years to verify. “Instead, they may want to start with a declaration for one of the key facilities, such as Yongbyon.”

The Trump Administration seems to have moved its goalpost from seeking complete, verified, irreversible denuclearization, and now appears willing to accept a piecemeal reduction in North Korea’s nuclear capabilities. In light of that, a list of assets is viewed as a minimum ask, though it is unlikely to be met this time around. Bruen, the former White House policy director, says Kim is angling “to keep as much of its nuclear arsenal, missiles, and research going as possible.”

“They are betting that Trump wants a deal so badly, he will give in far short of denuclearization,” he says. “Indeed, they hope to make oversight as minimally intrusive as possible.”

While in Vietnam, Kim is expected to be taken on a guided tour of the wonders of capitalist enterprise, visiting industrial zones where foreign investment flourishes. Among Kim’s top priorities, experts say, will be getting the U.S. to budge on sanctions that stand in the way of economic projects between North and South Korea.

North Korea is among the world’s most economically isolated nations due to crippling sanctions levied by the U.S. and the U.N., and it relies on China as its primary trading partner. Across the border, South Korea has become one of the richest countries in Asia, and Seoul is poised to implement a plan for an integrated Korean economy as soon as restrictions are lifted.

“Kim is looking for enhanced international status and an end to sanctions in return for a freeze in testing,” says Christopher Hill, a former Ambassador to South Korea. While millions of Koreans suffer under impoverished conditions, sanctions remain one of the most powerful incentives at America’s disposal. “[Kim] probably senses that Trump really, really wants a deal. This all adds up to a very worrisome situation.”

Pyongyang’s ultimate aim is to heal the divide of the Korean War by reunifying the peninsula under a single confederation. While South Korea also seeks unity, it’s still unclear what it would look like. Just as denuclearization doesn’t mean the same thing to Pyongyang as it does to Washington, Seoul envisions a very different future than its northern counterpart.

In Hanoi, Kim may see more than a model economy. He may see a model for a political future in which the North could eventually overtake the South as the heart of the nation. According to Sung-Yoon Lee, professor of Korean Studies at the Fletcher School of Tufts University, this could potentially be Kim’s endgame. So long as he maintains his arsenal, Kim has tremendous leverage over his neighbor.

Moreover, under the regime’s authoritarian rule, the Kim dynasty has the unwavering support of roughly 25 million people. In the democratic South, candidates rarely achieve 45% of votes.

“With luck, Kim could absorb the South without firing a shot,” Lee says. “But nukes, chemical, biological weapons and a high pain threshold — not to mention the advantage of being dictator in perpetuity impervious to public opinion — helps.” 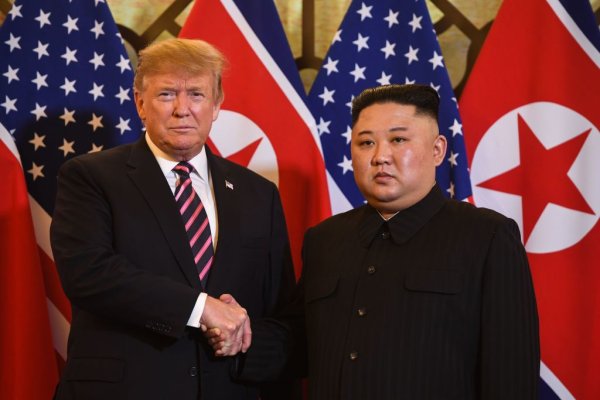 Trump and Kim Meet Again
Next Up: Editor's Pick