President Trump and Kim Jong Un Just Met for a Second Time. Here's What They Said

Trump’s team arrived first at the hotel Metropole Hanoi. About 10 minutes later, Kim’s motorcade pulled in. The two leaders met in a room with North Korean and American flags that looked much like the setting of their first meeting in Singapore.

Trump took three questions from the press pool, but answered with brevity. When asked if the pair would reach a peace deal, Trump told the press corps, “We’ll see.”

He reiterated that he and the leader of the reclusive state have a “great relationship,” but when asked if he would be backing down from pursuing complete denuclearization of North Korea, he simply said, “No,” and left it at that.

Kim, through an interpreter, said there had been “a lot of thinking, effort and patience” in the months since their last meeting. “We have been able to overcome all the obstacles and here we are today. I hope we can provide an outcome that is welcomed by everyone, and I’m sure that we can do this.”

“It’s an honor to be with Chairman Kim,” Trump replied.

The two leaders are now expected to talk face-to-face for 20 minutes with only their interpreters present. “Our relationship is a very special relationship,” Trump said later as they sat for dinner, each of them accompanied by two senior aides.

This second round of talks in Vietnam comes eight months after all eyes focused on Trump and Kim’s historic first meeting in June – an easing of hostilities following an escalation of rhetoric from both sides. But the outcome from that first meeting was largely symbolic. The two leaders vaguely agreed to work toward denuclearizing the Korean peninsula, without outlining a path to achieve that elusive goal, or even clarifying what exactly the thorny wording “denuclearize” entails.

Trump, who has pledged to solve the North Korea problem, says the potential for making a more substantive agreement with the reclusive kingdom in Vietnam is “awesome.” 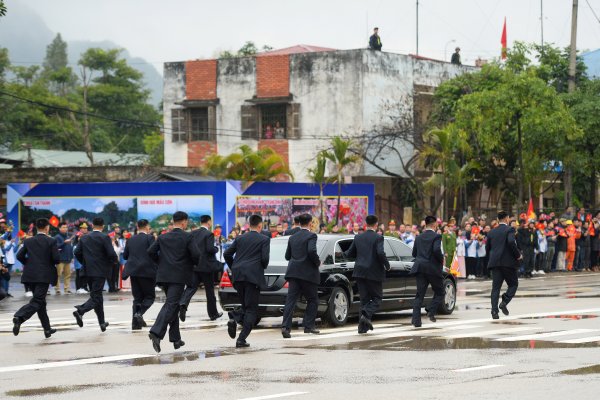 Kim Jong Un's Jogging Bodyguards Are Back for Summit in Vietnam
Next Up: Editor's Pick