Democrats Bet on Mueller Delivering the Goods. What If He Doesn't?

For a year and a half, leading Democrats argued that the safest response when asked about the Russia investigation was to defer to Special Counsel Robert Mueller, saying they just want to make sure he can complete his work.

But with rumors swirling that Mueller may be close to finishing, some now think that was the risky choice after all.

Several worst-case scenarios now loom for Democrats. The special counsel’s report could get tangled up in a separation of powers dispute and never see the light of day. Mueller or Attorney General William Barr could choose to leave out the parts about Trump since he’s not being charged with a crime. The report could have a lot of circumstantial evidence but no smoking gun. Or the report, whether damaging to Trump or not, could land with a thud, with Republicans claiming vindication and Democrats seething in anger.

Any one of those outcomes puts Democrats in a bind, especially given their previous statements on Mueller.

“You can’t on the one hand defer to Mueller and say … we believe in Mueller’s integrity and we’re going to abide by and await his report and say now that we have it we want to re-plow that ground and decide something different from what he decided,” said Stanley Brand, who was counsel for the House of Representatives under former Democratic Speaker Tip O’Neill from 1976 to 1983. “So I think there is a contradiction here in some point in the Congress putting so much weight on the Mueller report.”

To be sure, if Mueller’s report contains explosive details and becomes public, Democrats will have made the right choice in letting his investigation play out. But if it doesn’t, they are sure to take heat — not only from Republicans, but from within their own ranks. The progressive wing of the Democratic party, which has been agitating to take impeachment seriously, will almost inevitably harp on the fact that Democrats wasted precious time waiting for the Mueller report, and begin an even more vocal push to try to remove him from office.

Tom Steyer, the California billionaire and a leader of this movement — he has committed nearly $100 million towards impeachment efforts — said he never thought the report would actually move the needle, and that it was essentially a procrastination technique for congressional Democrats.

“I always felt the words ‘wait for the Mueller report’ were a very ill-considered and mistaken idea to actually put off what we’ve always known needs to happen — to expose this President, to expose him publicly to the American people, and then remove him from office and get rid of him as fast as possible,” he said.

But before Democrats even contend with the contents of the Mueller report, they are gearing up for a fight to even see it.

Under current regulations, the Justice Department has no obligation to submit the report in full to Congress. Mueller needs to submit a report to Attorney General William Barr, who then has jurisdiction over how much he releases. The only thing Barr is required to tell Congress is when he declined to follow Mueller’s recommendations, including for prosecution. Beyond that, he has broad discretion.

Congressional Democrats, meanwhile, have made clear they will not be satisfied with anything but a full report. In a Feb. 22 letter to Barr, six chairs of the most powerful committees in the House of Representatives urged him to release the report to the public “without delay and to the maximum extent permitted by law.” They also specified that once it is released to the public, members Congress confidentially receive any redacted parts to discern whether such omissions were necessary.

Democrats also have public opinion on their side when it comes to publicizing the report. Eighty-seven percent of Americans, including 80 percent who identify as Republicans, say the report should be released publicly, according to a February 2019 poll from CNN. This sentiment aligns with those of Republican lawmakers and aides on Capitol Hill, who think the more information that is released in the open the better.

The last time so much was riding on this type of report was arguably two decades ago when Ken Starr, who served as independent counsel in Bill Clinton’s White House, released his findings revealing that the president had lied under oath about an extramarital affair. Ultimately, these revelations led to Clinton’s impeachment in the House.

But there was a key difference: Starr, who was operating under a different set of rules, was required to submit the report in its entirety to Congress. Now, thanks to rules adopted after the Starr Report, legal and Congressional experts argue, Democrats and the Justice Department are essentially wading into uncharted waters.

The law Mueller is now working under, said Charles Tiefer, a law professor at the University of Baltimore who was deputy chief counsel for the House committee investigating the Iran-Contra scandal in the 1980s, have made it much easier for the Justice Department to curtail Congress’ access to their work. “It is unprecedented for the attorney general to have such power to block and screen and suppress,” he said.

“Ed Meese [Reagan’s Attorney General during Iran-Contra] was not at all able to interfere in the dialogue between independent counsel walsh and the congressional committees,” Tiefer noted. “When Ken Starr provided his evidence to … Congress, [Clinton’s Attorney General Janet Reno] stood completely out of the way.”

While the regulations present a hurdle for Congress, veterans of investigations are confident lawmakers will ultimately get what they need. House Democrats are now armed with subpoena power, and have made clear they will use it to get the report.

“We will obviously subpoena the report, we will bring Bob Mueller in to testify before Congress, we will take it to court if necessary,” House Intelligence Chairman Adam Schiff told ABC News on Feb. 24. “And in the end, I think the department understands they’re going to have to make this public.”

But experts also caution that these actions could produce a showdown between the legislative and executive branch that won’t end neatly or in a timely fashion, likely ending in a showdown at the Supreme Court.

“It’s one thing to talk about a subpoena, it’s another thing to get it enforced. It has to go somewhere to be enforced, and that’s the court,” said Brand, the former Counsel for House of Representatives. “It won’t be just a complicated separation of powers case. It will enter the docket of a federal district court and that will take a while.” 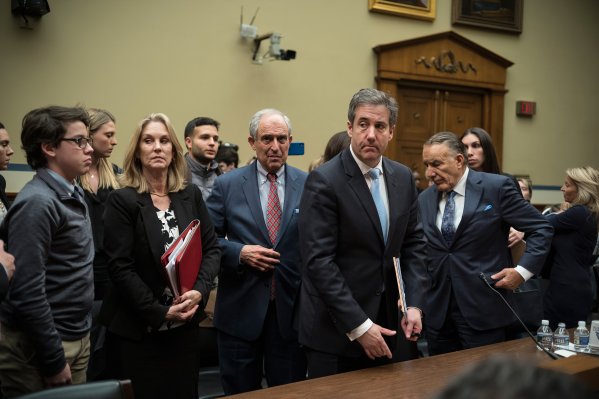 Cohen Showed Where Trump Investigations Are Headed
Next Up: Editor's Pick