Here's Who Is Still Alive on Game of Thrones

Game of Thrones set the stakes high early on by killing off Ned Stark, the ostensible main character, in the show’s first season. Since then, more than 100 characters have died over the show’s brutal seven seasons. (If your memory is fuzzy, here’s a comprehensive list of every single character who wound up on the wrong end of a sword or a dragon.) A few fan favorites didn’t survive the bloody Battle of Winterfell in the third episode of the final season, and a major ally of Daenerys didn’t survive episode four, “The Last of the Starks.” Cersei and Jamie went down in episode five “The Bells” too.

But dozens of beloved characters have survived — or been resurrected — long enough to join Jon and Daenerys as they face Cersei in the final episodes of Game of Thrones . Given the show’s history of violence, it’s likely that few will survive the final fight.

But plenty of other characters have proven themselves to be survivors and could play surprising roles in the fight, like Jon Snow or Arya Stark. Here are all the people who are still breathing headed as the final season winds down.

Jon Snow (Kit Harington) survived yet another encounter with the Night King during the Battle of Winterfell. But he and his lover-slash-aunt Daenerys Targaryen (Emilia Clarke) need to decide who is the true heir to the Iron Throne before they take on Cersei (Lena Headey).

Daenerys may have lost her faithful advisors, Jorah (Iain Glen) in the fight against the wights, but she survived the Battle of Winterfell thanks to his heroism. She is likely to pursue Cersei and King’s Landing next. But she will have to settle her beef with Jon over which Targaryen should be on the throne and with Sansa over who should rule Winterfell before the season is over.

Tyrion Lannister (Peter Dinklage) and Sansa Stark (Sophie Turner) had a touching moment in the crypts during the Battle of Winterfell, but they still stand on opposing sides when it comes to their loyalty to Daenerys as the Queen of Westeros. Tyrion will have to decide who he believes in as a ruler in the final episodes. Perhaps his chat with Bran by the fireside in the second episode of the eighth season gave him crucial information he’ll need before the end of the series.

Sansa Stark will have to rebuild much of Winterfell after the devastating Battle of Winterfell. Part of that process will be continuing to insist on the North’s independence from Daenerys, a dangerous stance to take against the Dragon Queen.

Maisie Williams in Game of Thrones
Helen Sloan/courtesy of HBO.

Arya (Maisie Williams) saved the world. Now what? Likely, she will play an important role in uniting her surviving siblings, Sansa, Bran (Isaac Hempstead Wright) and — honorarily speaking — Jon together.

Thanks to Arya, the Three-Eyed Raven survives. Given that he can see the past — and at least parts of the future — he’ll likely have some important role to play in verifying Jon’s Targaryen lineage to a doubtful Daenerys.

Disgusted with Cersei’s covert plan to attack Daenerys and Jon Snow when the fate of the entire realm is at stake, Jaime (Nikolaj Coster-Waldau) walked out of King’s Landing. Now that he’s survived the Battle of Winterfell, he’ll have to confront his sister.

Brienne of Tarth with the Oathkeeper.
HBO.

Brienne (Gwendoline Christie) fulfilled her life-long dream of becoming a knight and survived the Battle of Winterfell to boot. She will likely stay loyal to the Stark girls, whatever they decide to do now.

John Bradley in Game of Thrones
Helen Sloan/courtesy of HBO

Sam (John Bradley) managed to survive the fight with the dead. We know he would prefer to see Jon on the Iron Throne over Daenerys. It’s unclear what role he’ll play in their possible rift.

Ser Davos (Liam Cunningham) and Tyrion discussed Jon and Daenerys possibly marrying and ruling together. It’s unclear if revelations about Jon’s parentage will change those plans.

Cersei tasked Bronn (Jerome Flynn) with killing her two brothers if they survived the Battle of Winterfell. Bronn has always prioritized money over loyalty, so this will be a test of his values.

Tormund (Kristofer Hivju) will likely pursue Brienne now that they’ve both survived the Battle of Winterfell.

Gendry (Joe Dempsie) and Arya are now an item. Could an alliance between Robert Baratheon’s bastard son and Ned Stark’s daughter be politically advantageous in the struggles to come? After the Battle of Winterfell, Daenerys declares that he is now the Lord of Storm’s End. After the pronouncement, he proposes to Arya, only to be rejected.

Theon freed his sister, Yara Greyjoy (Gemma Whelan) before heading back to Winterfell to fight the Night King. Yara is still allied with Daenerys and will likely provide naval forces in the battle against Cersei. In “The Last of the Starks” we learn that she has retaken the Iron Islands.

Grey Worm leads the Unsullied in the Battle of Winterfell.
Helen Sloan—HBO

After leading the Unsullied in the battle against the Night King, Grey Worm deserves a vacation — especially after watching his girlfriend, Missandei, lose her head in “The Last of the Starks.” But he’ll have to help Daenerys fight Cersei first.

Daenerys asks Daario (Michiel Huisman) and the Second Sons to stay in Meereen to keep the peace while a democratic government is established.

Arya trapped Jaqen (Tom Wlaschiha) and pointed her sword at him in the House of Black and White. He allowed her to leave while also taking back her identity as Arya Stark.

After bringing Bran to Winterfell, Meera (Ellie Kendrick) tells Bran that she has to return to her family home, Greywater Watch, before the White Walkers arrive. She observes that the real Bran died in the cave of the Three-Eyed Raven and then leaves.

Gilly (Hannah Murray) survived in the crypts during the Battle of Winterfell. During “The Last of the Starks,” she and Sam reveal that she is pregnant, and that if the baby is a boy, they’ll name him Jon.

After Euron captures Ellaria (Indira Varma), Cersei imprisons Ellaria with her daughter, Tyene (Rosabell Laurenti Sellers). Cersei poisons Tyene and tells Ellaria that she will be kept alive to watch her daughter die and decompose. In theory, Ellaria is still in the dungeons in King’s Landing. Could she play a role in the fight to come?

Robin (Lino Facioli), following the advice of Littlefinger, sends the Vale armies to help his cousin Sansa fight the Boltons. It’s unclear who is counseling Robin now that Littlefinger is dead.

Hot Pie (Ben Hawkey) tells Arya that Jon Snow defeated the Boltons at the Battle of the Bastards, and Arya decides to travel home to her family rather than to King’s Landing to kill Cersei. She warns Hot Pie to be careful, and he says he’s a survivor. 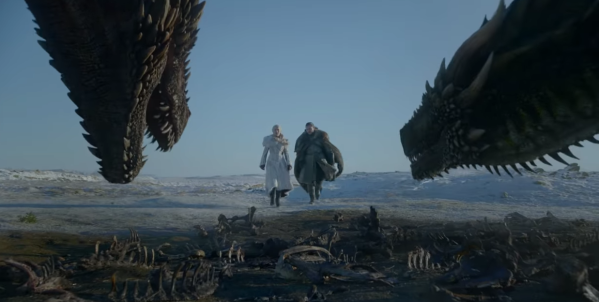 The New Game of Thrones Season 8 Trailer Hints at a Jon Snow Scene That Would Change the Whole Game
Next Up: Editor's Pick