After being diagnosed with brain and lung cancer in 2011, Lynn Mitchell, 68, was averaging about an hour of solid sleep a night. Stressed about her treatments, she was paying for it in hours of lost sleep.

The brain cancer was already affecting her mobility—Mitchell was often dizzy and would lose her balance—but the lack of sleep was exacerbating things. Even walking became increasingly difficult. Exhausted in the mornings, she was practically incoherent. When her doctors recommend she see a sleep therapist, Mitchell was relieved at how benign it sounded in comparison to the chemotherapy she had undergone and the gene therapy trial she was undergoing, which had side effects like nausea and fatigue.

For about nine weeks, Mitchell worked with the sleep therapist to adjust her sleep habits. She got under the covers only when she was extremely tired. She quit watching TV in bed. She stopped drinking caffeinated coffee in the evening. She also learned breathing exercises to relax and help her drift off. It was all quite simple and common sense, and, most importantly, noninvasive and didn’t require popping any pills.

“It’s common knowledge that sleep is needed for day to day function,” says Dr. David Rapoport, director of the Sleep Medicine Program at NYU School of Medicine. “What isn’t common knowledge is that it really matters—it’s not just cosmetic.” Rapoport has long seen people seek sleep therapy because they’re chronically tired or suffering from insomnia, but an increasing number of patients are being referred to his center for common diseases, disorders, and mental health.

Researchers have known for some time that sleep is critical for weight maintenance and hormone balance. And too little sleep is linked to everything from diabetes to heart disease to depression. Recently, the research on sleep has been overwhelming, with mounting evidence that it plays a role in nearly every aspect of health. Beyond chronic illnesses, a child’s behavioral problems at school could be rooted in mild sleep apnea. And studies have shown children with ADHD are more likely to get insufficient sleep. A recent study published in the journal SLEEP found a link between older men with poor sleep quality and cognitive decline. Another study out this week shows sleep is essential in early childhood for development, learning, and the formation and retention of memories. Dr. Allan Rechtschaffen, a pioneer of sleep research at the University of Chicago, once said, “If sleep does not serve an absolutely vital function, then it is the biggest mistake the evolutionary process ever made.”

But to many of us, sleep is easily sacrificed, especially since lack of it isn’t seen as life threatening. Over time, sleep deprivation can have serious consequences, but we mostly sacrifice a night of sleep here and there, and always say that we’ll “catch up.” Luckily, it is possible to make up for sleep debt (though it can take a very long time), but most Americans are still chronically sleep deprived.

While diet and exercise have been a part of public health messaging for decades, doctors and health advocates are now beginning to argue that getting quality sleep may be just as important for overall health. “Sleep is probably easier to change than diet or exercise,” says Dr. Michael Grandner, a sleep researcher at the University of Pennsylvania. “It may also give you more of an immediate reward if it helps you get through your day.” Sleep experts claim that it is one of the top three, and sometimes the most, important lifestyle adjustments one can make, in addition to diet and exercise. And while there’s more evidence linking diet and exercise as influential health factors, sleep is probably more important in terms of brain and hormonal function, Grandner says. “Among a small group of [sleep researchers], it’s always been said that [eating, exercise, and sleep] are the three pillars of health,” says Dr. Rapoport.

In our increasingly professional and digital lives, where there are now more things than ever competing for the hours in our day, carving out time for sleep is not only increasingly difficult, but also more necessary. Using technology before bed stimulates us and interferes with our sleep, yet 95% of Americans use some type of electronics like a computer, TV, or cell phone at least a few nights a week within the hour before we go to bed, according to a 2011 National Sleep Foundation survey. “Many doctors, lawyers, and executives stay up late and get up early and burn the candle at both ends,” says Dr. Richard Lang, chair of Preventative Medicine at the Cleveland Clinic. “Making sure they pay attention to sleep in the same way they pay attention to diet and exercise is crucial.”

To some, sleep has become a powerful antidote to mental health. Arianna Huffington, president and editor-in-chief of the Huffington Post Media Group, advocates that sleep is the secret to success, happiness, and peak performance. After passing out a few years ago from exhaustion and cracking a cheekbone against her desk, Huffington has become something of a sleep evangelist. In a 2010 TEDWomen conference, Huffington said, “The way to a more productive, more inspired, more joyful life is getting enough sleep.” Research linking high-quality sleep with better mental health is growing; a 2013 study found that treating depressed patients for insomnia can double their likelihood of overcoming the disorder.

While 70% of physicians agree that inadequate sleep is a major health problem, only 43% counsel their patients on the benefits of adequate sleep. But there’s growing pressure on primary care physicians to address, and even prescribe, sleep during routine check-ups. In a recent study published in the journal The Lancet Diabetes & Endocrinology, the researchers concluded that health professionals should prescribe sleep to prevent and treat metabolic disorders like obesity and diabetes. And overlooking sleep as a major health issue can also have deadly consequences. It was recently reported that the operator of the Metro-North train that derailed in New York last year, killing four people and injuring more than 70, had an undiagnosed case of sleep apnea.

Sleep therapies can range from simply learning new lifestyle behaviors to promote sleep, to figuring out how to position oneself in bed. More drastic measures involve surgery to open up an airway passage for people suffering from disorders like sleep apnea. Sleeping pills can be prescribed too, to get much needed rest, but sleep therapists tend to favor other approaches because of possible dependencies developing.

A large part of reaping the benefits of sleep is knowing when you’re not getting the right amount. According to a 2013 Gallup survey, 40% of Americans get less than the recommended seven to eight hours a night. While the typical person still logs about 6.8 hours of sleep per night, that’s a drop from the 7.9 Americans were getting in the 1940s.

When it comes to adequate sleep, it’s much more personalized than previously thought. Some people feel great on five hours of rest, while others need ten. The best way to determine if you’re getting the right amount, doctors say, is to find out how many hours of sleep you need to be able to wake up without an alarm and feel rested, refreshed, and energetic throughout the day.

Since reforming her sleep habits, Mitchell has been clocking up to seven hours of shuteye a night for the past two months. “I’m alert in the morning, my balance is better, and I feel peppier,” says Mitchell. Getting enough sleep has helped her better deal with her cancers, and its symptoms. The best news is that she recently found out that her brain tumor is shrinking, and there are fewer cancerous spots on her lungs. 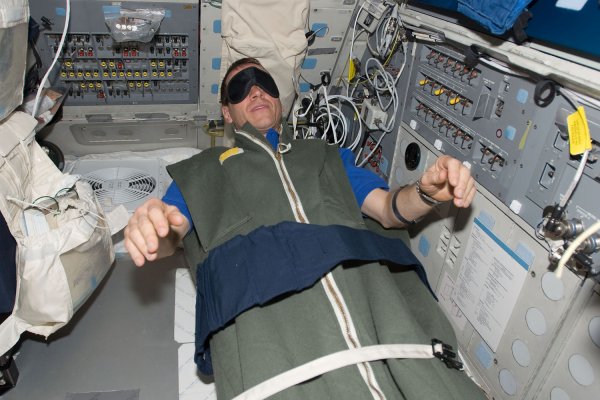 How to Get a Good Night's Sleep From Astronauts
Next Up: Editor's Pick