Though Prince Harry and Meghan, Duchess of Sussex had royal baby Sussex on Monday, we may not learn the boy’s name for a little while.

The royal baby was born at 7 pounds, 3 ounces, at 5:26 a.m. local time on Monday, May 6, according to the royal family’s press release. The public got a glimpse of baby Sussex on Wednesday when the Duke and Duchess took photos with their son for the first time.

But the royal couple doesn’t appear to have chosen the name themselves yet. Prince Harry said on Monday that they’re “still thinking about names” — even though the baby’s late arrival gave them more “time to think about it.”

We might learn the royal baby’s name soon though. In the interim, the Duke says the Sussex family is thrilled. “This little thing is absolutely to die for,” he said smiling. “I’m just over the moon.”

Waiting some time before announcing the highly-anticipated name is customary for the royal family. Prince William and Catherine, Duchess of Cambridge waited to share the names of their three children: Both Prince George and Princess Charlotte’s names were announced two days later, and Prince Louis’ name was announced a full four days after his birth.

But for the royal family, four days isn’t even that long a wait. Look no further than Prince Louis’ grandfather. Queen Elizabeth II waited an entire month before announcing Prince Charles’ name when he was born in 1948, and Princess Beatrice’s name was not announced until two weeks after she was born in 1988.

“There’s really no precedent at all or requirement to wait,” Victoria Arbiter, a royal expert and commentator for CNN, told TIME. “Different royals have waited different times.”

So, why do we have to wait to learn the royal baby’s name?

“First and foremost, there’s no room for error – particularly when you’re naming an heir,” Arbiter says. Waiting some time to live with the child and experience its personality offers an opportunity to ensure the right decision has been made. Once the Kensington Palace announces the name, there is absolutely no going back.

And, if this baby has a chance at the throne, the decision becomes increasingly complex.

Arbiter says that whether the Duchess of Sussex chose to keep her baby’s name hush-hush was less important in this capacity, because the child is so far down the line of succession (at no. 7), which gives more “leniency” in the naming process. The naming of Prince Harry and the Duchess’ child holds even less weight because it is likely that the child will not be a prince or princess. “There’s a little bit more freedom when there’s no ‘prince’ or ‘princess’ affixed to the Christian name,” Arbiter says.

The queen could issue a new patent giving the Sussex children HRH status if she chooses, as she did for the children of the Duke and Duchess of Cambridge in 2012. Though it’s at her discretion, she’d likely discuss the decision with the child’s parents before making her decree, according to Arbiter.

Of course, this extends to the queen herself. Including the queen in the naming and making sure she’s notified of the final decision first is definitely a royal custom. But this holds true for any member of the royal family. After all, it would be quite awkward for any cousin to learn a new royal’s name from Kensington Palace’s Twitter account.

Still, there’s another reason Harry and Meghan may have kept the name announcement to themselves for a while: just to have some privacy. “When a royal baby is born, it is immediately thrust into the public sphere. “From then on, there’s going to be a public appetite,” Arbiter explains. This was especially true for Prince William and the Duchess of Cambridge giving birth to their first son, George, who is heir to the throne. “They knew there was massive global interest,” Arbiter says, “So just being at home where it was only them and their immediate family that knew the baby’s name, it just gave them some private time as a family before unleashing it on the world.”

For Arbiter, who has spent her career reporting on and analyzing the royal family, it’s not surprising that Harry and Meghan have followed a traditional path and withheld the baby’s name. “Although media would have you believe otherwise, they’re not breaking any traditions, any protocols,” she says. “They haven’t broken any rules, but they’re certainly doing things their way.” 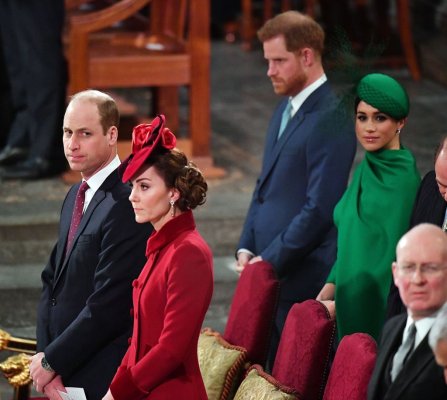