'I Knew This Was Injustice.' Saudi Sisters Describe the Oppressive Society They Left Behind

It was the lack of change after a 2016 hashtag campaign against Saudi Arabia’s male guardianship laws that finally pushed Reem to flee what she described as her country’s system of female enslavement.

Reem, who had never so much as felt the sunlight outside her door without a male relative’s permission, read on her iPhone about freedoms enjoyed by young women elsewhere. Then she came across #StopEnslavingSaudiWomen.

“It was depressing to know that we don’t have a future as women in Saudi Arabia and we don’t have any hope for change. The ones who dared to [attempt] change got imprisoned,” she tells TIME in an interview. “This is the moment I planned to leave the country.”

She told her younger sister, Rawan, and over the next two and a half years, they plotted their escape via late night WhatsApp messages. “Life in Saudi for a woman with a strict family is like waiting around to die,” Rawan says. (Both sisters are using aliases to protect their identities.)

Six months ago, they made their move. But despite their careful plans, the sisters, aged 18 and 20, ended up in the crosshairs of the Saudi government’s efforts to repatriate runaways. They are the latest Saudi women to become marooned in an unfamiliar metropolis, pleading with the international community to provide a safe haven.

In 2018, Saudi ruler Crown Prince Mohammed bin Salman was applauded by Western governments for removing a ban on women drivers and reopening movie theaters. But advocates say these incremental changes do little to ease the world’s most rigidly enforced gender segregation, and call for the release of detained female activists and an end to the male guardianship system that prevents women from freely working or even leaving the home without a husband or father’s permission.

“What the prince is doing is not very genuine. He is just trying to please the international community,” says Suad Abu-Dayyeh, Middle East and North Africa consultant for gender equality NGO Equality Now.

Saudi women are meanwhile continuing to risk everything to flee beyond their country’s borders. According to the UN Refugee Agency, the number of Saudi asylum seekers increased from 483 cases pending during the 2015 mid-year report, to 1,308 pending in 2018’s report. Although these numbers aren’t broken down by gender, recent high-profile cases have involved young women attempting to escape Saudi Arabia’s patriarchy by any means possible. In January, 18-year-old Rahaf Mohammad al-Qunun barricaded herself in a Thai hotel room while waging a social media campaign that drew attention to her case. She eventually secured resettlement in Canada.

On Monday, Reem and Rawan described to TIME a stultifying upbringing during which their anger swelled against the daily humiliations and ostracization that can come with failing to be seen as a “good woman.” Dressed in jeans and t-shirts, the soft-spoken sisters sometimes interrupted each other in Arabic to add details, and shook their heads while remembering.

“They didn’t let me live my childhood. Since I was 11 I had to cover all of my body. I knew this was injustice, this was unequal,” Reem says. “We had this anger, but we couldn’t show [it]. Because every time we just showed a little, like [using] the word ‘no,’ we [would] be punished.”

The sisters say their two older brothers and father beat them “with or without reason.” Reem recalled her father throwing a dish at her and injuring her hands. Even their 10-year-old brother joined, they say.

“They broke me. I did everything they wanted and they took my joy and passion in life,” Rawan says. Her only escape was secretly listening to Korean pop music, she adds.

The sisters finally got their chance to leave in September last year during a family vacation in Sri Lanka, that coincided with Rawan’s 18th birthday – a milestone that allowed her to apply for an Australian visitor’s visa without parental permission.

On their last day with their family, Reem and Rawan listened to talk of walking in Colombo the next day and made lunch like everything was normal. At 5 a.m., they bolted. Rawan fetched the passports from their parents’ room, “unable to feel the blood” in her body, she says. Reem called the taxi.

They understood that getting caught could mean severe punishment and possibly, as they had both renounced Islam, a death sentence. And so they barely breathed as they swapped their abayas for illicitly-purchased jeans—their first pairs.

It was in Hong Kong, en route to Australia, that their dash for freedom was curtailed. What was supposed to be a two-hour layover on Sept. 6 spilled into a nearly six-month ordeal after officials from the Saudi consulate intercepted them at the airport. The sisters were prevented from boarding their onward flight to Australia at the behest of consular officials, according to airline documents seen by TIME. The Saudi consulate did not return a request for comment.

Fearing they would be kidnapped and forcibly returned to Saudi Arabia, Reem and Rawan grabbed their passports and headed into the city as visitors. A compassionate taxi driver allowed them to use his phone to book a hotel. Since then, they say they have been pursued by their family and the consulate. They have changed locations 13 times, bouncing between hotels and shelters, while subsisting on instant noodles, and having “only each other” to rely on.

After their Saudi passports were invalidated in November, the Hong Kong Immigration Department told the women their presence in the city will only be tolerated until Feb. 28, according to a letter seen by TIME. With just two days remaining, they are desperate for refuge in a safe country and are banking on an application for an emergency visa to a third country. “I think if we were sent back home our family will honor kill us. Also, I believe that they will do a virginity test,” Rawan says.

Abu-Dayyeh, from Equality Now, says women who are repatriated after attempting to flee their male guardians are at serious risk. Punishments run the gamut of being locked in the family home, to criminal charges for disobedience and damaging the kingdom’s reputation, or even death by honor killings at the hands of the family. But she adds that with every successful flight documented on social media, more Saudi women “may be encouraged to demand asylum or to talk about their situation.”

Reem and Rawan have also taken to social media to describe their plight. In English and in Arabic, they describe their constant fear of being kidnapped and sent home on Twitter.

Their worries only increased after they learned of the murder of Saudi dissident and Washington Post columnist Jamal Khashoggi inside the Saudi consulate in Istanbul in October. “I was terrified that this is [how] the Saudi government behaves in front of the world and I was really disappointed that after [this], nothing changed and no one was punished,” Rawan says. “[I thought] what if that happened to me too?”

Yet both sisters say they don’t regret their bolt for freedom. In their last phone call home in November, they say they told their parents that they stick by their decision, and hope it prompts better treatment for their two younger sisters. “We hope they can live a better life than us,” Rawan says.

Reem, who was studying English literature in university, hopes to write a book one day about her and her sister’s experience. “I had a dream [when] I was on the plane that I would be in a safe country and I would live my life with freedom, but everything just broke, and I’m stuck here,” she says.

“I can’t see [the] end of this. We have to just try to keep hoping for the best and that this situation will end in a good way.” 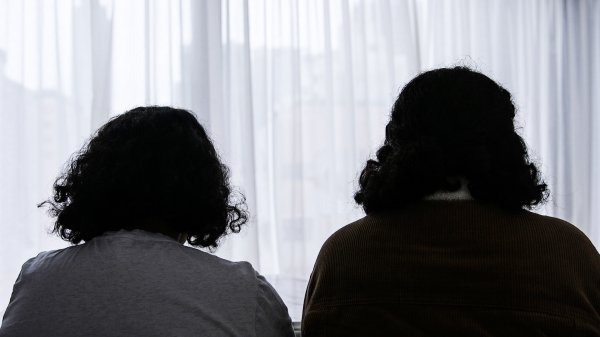