Captain Marvel Takes Place in the 1990s. Here’s How It Fits Into the Marvel Cinematic Universe Timeline

Captain Marvel may be the newest superhero to appear in the Marvel Cinematic Universe, but her solo film reveals that she was fighting bad guys decades before the Avengers ever assembled. Captain Marvel takes place in the 1990s when the warrior, who has been fighting with an alien race called the Kree, returns to earth in order to uncover the secrets of her past.

The events of Captain Marvel could have major implications on the rest of the Marvel Cinematic Universe timeline. The Kree play a major role in the first Guardians of the Galaxy film, and while on Earth Carol Danvers (Brie Larson) encounters both S.H.I.E.L.D., the government agency that later starts the Avengers initiative, and the Tesseract, a cube that contains an Infinity Stone and attracts the attention of Avengers: Infinity War villain Thanos.

Captain America becomes a superhero in Captain America: The First Avenger when he’s injected with super-soldier serum during World War II. He fights with the Nazi offshoot HYDRA, who possess the Tesseract, a powerful object that contains an Infinity Stone called the Space Stone. (Infinity Stones are powerful gems can be used to do things like shift time and manipulate space. When united, they can destroy life on a mass scale.)

Captain America crash-lands a plane with the Tesseract onboard to save the world and becomes frozen—both literally and in time. Tony Stark’s father, Howard Stark, recovers the Tesseract and eventually hands it over to S.H.I.E.L.D.

Carol Danvers/Captain Marvel becomes a fighter pilot in Captain Marvel. She gets into an accident that imbues her with the powers of an alien race called the Kree. Her memory wiped, she joins forces with the Kree, whom she describes as a race of “noble warrior heroes.” Two of those Kree warriors are Ronan (Lee Pace) and Korath (Djimon Hounsou), the main antagonists in Guardians of the Galaxy.

The Krees are embroiled in a war with a shapeshifting alien race called the Skrulls. (The shape-shifting part is important because with the introduction of these characters, any person in the MCU could, secretly, have been a Skrull all along.)

Captain Marvel discovers that she’s missing memories and returns to earth to try to find out who she was. There, she meets Nick Fury, who is doubting his commitment to the government organization S.H.I.E.L.D. Something about his interaction with Captain Marvel convinces him to stay at S.H.I.E.L.D. where he will eventually pursue the Avengers Initiative.

Jackson has confirmed that the Tesseract appears in Captain Marvel. At this point S.H.I.E.L.D. would be studying the object and the Space Stone inside. This may be the first time that Fury sees the Tesseract.

Nick Fury tells Iron Man (Robert Downey Jr.) about the Avengers Initiative in the end credits of Iron Man. In the sequel, Fury tells Stark that his father was a founder of S.H.I.E.L.D. and recruits Stark to consult with the Avengers. Stark also discovers that his father used the Tesseract in some of his scientific experiments.

In The Avengers, Loki (Tom Hiddleston), the brother of Thor (Chris Hemsworth), steals the Tesseract from S.H.I.E.L.D. in order to bring the Infinity Stone to Thanos—and also take over as supreme ruler of Earth. The newly-assembled Avengers stop him. But it’s clear that Thanos plans to collect Infinity Stones.

Marvels' Guardians of the Galaxy.
Disney

In Guardians of the Galaxy, a now-radicalized Ronan and Korath seek to obliterate the Xandarians, an ancient Kree enemy. Ronan strikes a deal with Thanos to retrieve a powerful orb for him in exchange for help destroying the planet. Ronan discovers that the orb contains an Infinity Stone and decides to destroy Xandar himself. The Guardians stop him.

Thanos is able to gather all the Infinity Stones in Avengers: Infinity War. He snaps his fingers and destroys half of all life in the universe. As he begins to disintegrate, Nick Fury sends a message on a very 90s-looking pager. The recipient? Captain Marvel’s logo appears on the pager’s screen. It’s unclear where Captain Marvel has been in the intervening years (or how she presumably managed not to age), but she is coming to save the day in Avengers: Endgame, which premiers April 26. 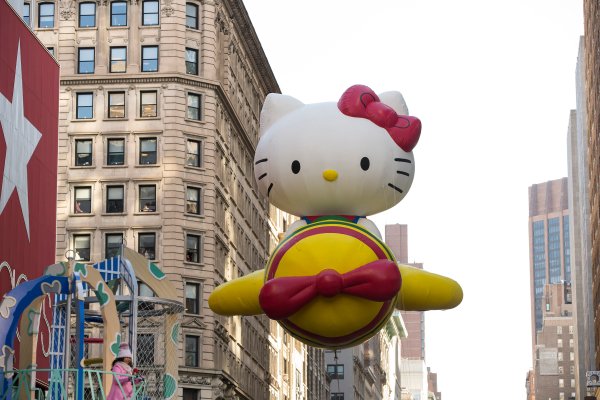 Hello Kitty to Hit the Big Screen for the First Time
Next Up: Editor's Pick