Emma Stone Had the Kindest Gesture for Her Fellow Oscars Nominee

Awards season may be a long, tough competition, but Emma Stone proves it can be a friendly one, even when it comes to the Oscars. In an Instagram uploaded by Mexican actress Marina de Tavira before Sunday night’s 91st Annual Academy Awards, fans get a glimpse at the kind note that the 2017 Best Actress winner and 2019 Best Supporting Actress nominee shared with her competitor in that category for this year’s big night.

“Congratulations! It’s a huge honor to be nominated alongside you,” Stone’s note reads. “Have an incredible night! xox, Emma.” De Tavira’s response: “The honor is all mine.”

Stone was nominated for her work in The Favourite, co-starring with ultimate Best Actress winner Olivia Colman and fellow category nominee Rachel Weisz. De Tavira, meanwhile, was nominated for Alfonso Cuaron’s Roma. While Roma took home a number of awards, including Best Director and Best Cinematography, at the end of the evening De Tavira was left without a statue — as was Stone. (Regina King of If Beale Street Could Talk ended up being Supporting Actress winner.)

But no matter. As De Tavira’s Instagram proves, sometimes winning is a matter of being part of the process and making new friends along the way; the two actresses were even spotted sharing a moment at the evening’s ceremony. 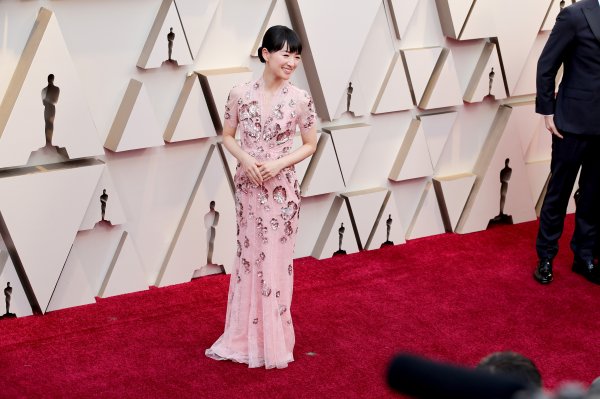 Everyone Had a Field Day With Mess Maven Marie Kondo's Oscars Presence
Next Up: Editor's Pick