'They Will Kill Us.' Two Saudi Sisters Hope an Emergency Visa Will Spare Them From Being Sent Home

Two Saudi sisters stranded in Hong Kong after they attempted to flee what they described as “slavery” at home have applied for an emergency visa to a third country, TIME has learned.

The sisters have just three remaining days during which Hong Kong authorities have agreed to tolerate their presence in the semi-autonomous Chinese enclave, according to documents viewed by TIME. After their Saudi passports were invalidated in November, the sisters, who go by the aliases Reem and Rawan, were permitted to stay until Feb. 28, according to a letter from the Hong Kong Immigration Department. The pair hope that their application to the third country — which they declined to have named — will be approved before the looming deadline.

“We are afraid. It’s really stressful not to know what will happen to us. Since there [are] just three days until we become illegal [overstayers] in Hong Kong, I am really scared about what is going to happen,” says Rawan.

The sisters, aged 18 and 20, are the latest Saudi women to be marooned in an unfamiliar country, pleading with the international community to provide them a safe haven. Last month, teenage runaway Rahaf Mohammed Alqunun captured global headlines after barricading herself in a Thai hotel room and mounting a social media campaign to avoid forcible repatriation. She eventually secured refugee status and resettled in Canada.

The sisters, who fled before Alqunun, arrived in Hong Kong in transit on Sept. 6, after escaping a family vacation to Sri Lanka. They say they never made it to Australia, their intended destination, because officials from the Saudi Consulate intercepted them at the airport, forcing them to enter the city as visitors. The stopover that was meant to only last two hours has instead stretched into nearly six months, with each moment spent looking over their shoulders.

“There is a government, there is a family, behind us that is chasing us. It’s an emergency,” says Rawan.

The Saudi Consulate and the Saudi Foreign Ministry have not responded to TIME’s request for comment.

In Hong Kong, the stranded sisters say they have changed locations 13 times, jumping between hotels and shelters, sometimes not staying in the same place for more than one night. They say they barely go outside for fear of being kidnapped and returned to the kingdom.

“Sometimes I feel like there is no difference. Here we spend all our time trapped inside. There, it was slavery, I was like a prisoner,” says Reem.

The pair have renounced Islam, a crime punishable by the death penalty in Saudi Arabia. They say if they are sent home to their chronically abusive family they may be honor-killed, or indefinitely locked in their homes.

“Terrible things will happen to us if we go home,” says Reem. “They will kill us. Or, if they show mercy, they might imprison us worse than before. And then force us into marriage [with our] cousin.”

Since the sisters have not applied to other countries for asylum, all their hopes rest on the emergency visa.

Both sisters say they desperately hope they will soon be living somewhere they can be assured of their safety, and of their right to make decisions for themselves.

“I just want to live my life like a normal girl,” says Rawan. 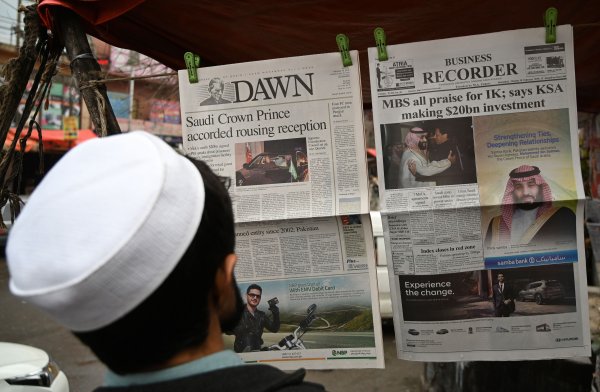 Saudi Arabia Is Investing $20 Billion in Pakistan. Here's What It's Getting in Return
Next Up: Editor's Pick