Kelly was indicted by a grand jury that charged him with sexually abusing four victims, at least three of them underage. The accusations span between 1998 and 2010. Foxx said that each count had a sentencing range of three to seven years, which means he could face up to 70 years in prison. Kelly was expected to appear in bond court on Saturday afternoon, according to Foxx.

Steve Greenberg, R. Kelly’s attorney, said that the singer was “shell-shocked” and “extraordinarily disappointed and depressed” by the charges in an interview on Friday with the Associated Press. Greenberg said Kelly maintained his innocence but planned to turn himself into authorities on Friday night.

Greenberg did not immediately return a request from TIME for comment. On Kelly’s behalf, he has repeatedly denied all accusations that Kelly engaged in any sexual misconduct or abuse.

Aggravated criminal sexual abuse is a class 2 felony. In 2017, Illinois removed the statutes of limitation for sex abuse crimes to give victims time to come forward.

This marks the second time Kelly has been charged with a sex crime by Cook County prosecutors. In 2002, he was indicted after a similar tape emerged of what prosecutors described as Kelly having sex with and urinating on an underage girl. But he was acquitted of all 21 counts of child pornography in 2008; both Kelly and the girl denied that the video depicted them.

Last month, the singer came under renewed scrutiny after the docuseries Surviving R. Kelly aired on Lifetime. Through more than 50 interviews with Kelly’s siblings, his ex-wife, accusers, and journalists like Jim DeRogatis—who has investigated Kelly for years—the series explored allegations against Kelly stretching back to the early 1990s. Women said that as underage girls, they were lured into sexual relationships by Kelly and were mentally and physically abused by him and kept from leaving his homes.

The documentary prompted Foxx to make a public plea for any accusers of Kelly to come forward. In-person protests and an online campaign, #MuteRKelly, emerged, and his label, RCA Records, dropped him under pressure.

Earlier this month, the lawyer Michael Avenatti said he had handed in a tape to the attorney’s office that showed Kelly sexually assaulting an underage girl. In a press conference on Friday afternoon, Avenatti said the tape dates back to approximately 1999 and is over 40 minutes in length. He said it shows Kelly performing sex acts on a girl, urinating on her and referring to her “14-year-old” body parts.

Avenatti said that Mr. Kelly and his team suppressed the video during the 2008 trial, and said he would pursue charges of obstruction of justice against them. “The trial was rigged in 2008,” he said. “Mr. Kelly and others close to him took specific steps to keep this out of the hands of prosecutors in connection with the 2008 trial because how critically important it was to Mr. Kelly’s ability to gain an acquittal.”

Avenatti, who is best known for representing Stormy Daniels in a lawsuit against President Donald Trump, said that the girl in the tape is one of the four victims mentioned in the indictment, and that he had recovered a second similar tape that he would soon turn over to Foxx.

“I am highly confident that Mr. Kelly will be convicted,” he said.

Cook County State’s Attorney’s Office did not immediately respond to a request to confirm whether the girl in the video was mentioned in the indictment.

In January, Kelly’s former road manager, Henry James Mason, turned himself into Georgia authorities after being accused of threatening a father who claimed Kelly had kept his daughter from her family.

On Wednesday, Greenberg said that Kelly was moving out of his Chicago recording studio due to a judge blocking Kelly’s request to work there longer into the night.

This week, Foxx also recused herself from the investigation into Jussie Smollett.

On Thursday, the lawyer Gloria Allred, who represents multiple women who have accused Kelly of abuse, held a press conference in which two additional women accused Kelly of sexual misconduct. The women said that in 1995, they were 15 and 16 years old when they were propositioned by Kelly to have sex after one of his concerts.

“You have nowhere to run and nowhere to hide,” Allred said during the press conference. “You have been able to get away with your predatory misconduct for far too long.”

With reporting from Mahita Gajanan. 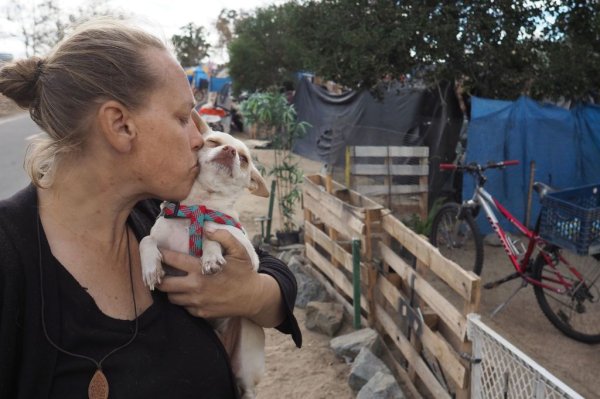 One Approach to Fighting California's Homelessness Crisis: Make Room for Pets
Next Up: Editor's Pick