President Donald Trump is expected to convene a new panel that will likely undermine the expert consensus that climate change threatens national security.

But experts say that move is at odds with his recent declaration of a national emergency at the U.S. border, where thousands of the Central American migrants have arrived after fleeing the effects of climate change.

“Yeah, they’re economic migrants, but they’re really climate refugees,” says Robert Albro, a researcher American University who has studied the effects of climate change in Latin America. But “the politics around this is so toxic that it’s unlikely to have any kind of productive forward motion in the foreseeable future.”

Trump’s new panel underscores a fundamental irony at the center of the Administration’s treatment of two complex challenges facing the U.S. today: neither new migrant caravans nor climate change can be prevented with a stalwart commitment to an “America First” agenda. Instead, both issues require precisely the kind of international cooperation and global interdependency that Trump routinely decries.

The fact that climate change is one of several primary drivers behind global migration is not controversial among experts.

Researchers and development officials have documented in recent years a slew of climate risks facing Central America, particularly Guatemala, Honduras and El Salvador. A 2016 report from the Food and Agriculture Organization showed 1.6 million people suffering from food insecurity in the region as a result of climate-change related drought, which has left rural and impoverished communities the most vulnerable. Throughout the region, the effects of climate change have made crops unprofitable, driving farmers into cities, and eventually toward the U.S. Thousands more Central Americans have suffered from malnutrition and an inability to feed their children.

“They usually don’t go after the first drought,” says Stephanie Leutert, director of the Mexico Security Initiative at the University of Texas at Austin. “But when the drought comes back and they don’t have many any more savings, they have do something.”

Government scientists, even those working for the Trump administration, have acknowledged the link between climate change and increased migration. The Fourth National Climate Assessment (NCA) — a Congressionally mandated report released last year by more than a dozen federal agencies — noted that climate change would drive future migration in the U.S. and included a section highlighting how extreme weather has contributed to past migrant crises.

The link between climate change and migration extends to other parts of the globe as well, including the Middle East. A 2017 study published in the journal Science showed that by the end of the century climate change could double the number of refugees seeking asylum in Europe. And other research has shown that climate change-related drought has worsened the conflict in Syria. While environmental devastation is not the only factor contributing to unprecedented trends in global migration, it’s clear it’s contributing to the global movement of people.

The irony undergirding Trump’s declaration of a national emergency at the U.S. border will likely have no effect on his national security panel on climate change. The 12-member committee, which was first reported by the Washington Post, will be led by William Happer, a retired Princeton University professor who has vocally denied the science of climate change and memorably compared environmentalists’ criticism of carbon dioxide to the persecution of the Jewish people during World War II. Its convocation follows a barrage of comments from Trump that have sought to undermine climate science. He has repeatedly trolled the internet with tweets about cold weather and the Administration has engaged in a concerted effort to undo the country’s environmental regulations. “I don’t believe it,” Trump said in November of the NCA and, by extension, climate change more broadly.

Still, it remains unclear what tangible effects the panel’s conclusions might have. Experts at federal agencies continue to acknowledge and prepare for the threat of climate change, including the Department of Defense which last month highlighted the threat a warmer world plays to national security in a congressionally mandated report. And in many cases agencies are compelled to act on climate change by a complex set of federal law and Supreme Court rulings.

The notion that climate change could constitute a national emergency has won over many Democrats eager for ways to implement climate policy come 2020. For that reason, many Republicans have remained skeptical of Trump’s emergency declaration. “Today’s national emergency is border security,” said Senator Marco Rubio, a Florida Republican. “But a future president may use this exact same tactic to impose the Green New Deal.”

Indeed, future Democrats may point to the migrant crisis to justify it. 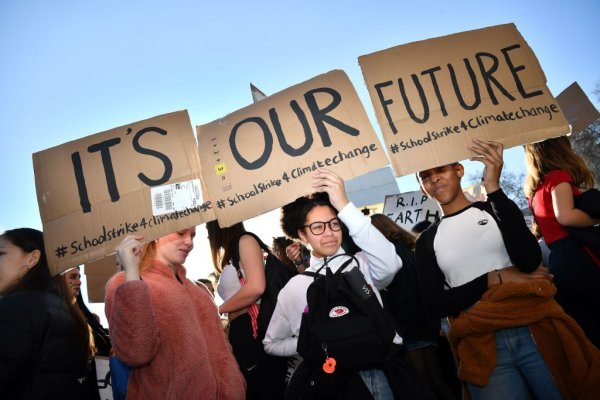 'Climate Change Is Forever.' Thousands of British Schoolchildren Walk Out in Environmental Protest
Next Up: Editor's Pick