Over the past two years, Fridamania has tipped into Frida Fatigue.

Frida Kahlo became a Barbie (to the chagrin of her family). She was rendered as a cartoon skeleton in the Pixar movie Coco. She has appeared as a Google doodle, on totes, tattoos, nail polish and viral global art campaigns. She even received her own Snapchat filter, which lightened her skin and reduced her to her signature unibrow and floral headdress.

But a new exhibit at the Brooklyn Museum hopes to draw attention away from superficial signifiers and deepen our understanding of the artist, who died at 47 in 1954. “Frida Kahlo: Appearances Can Be Deceiving,” open through May 12, reveals a collection of Kahlo’s possessions that were uncovered in 2004 after being locked away for 50 years. They were shown in an exhibition in Mexico City curated by Circe Henestrosa in 2012 and now arrive in the United States for the first time. The Brooklyn Museum exhibition is based on the 2018 V&A London exhibit that was curated by Circe Henestrosa and Claire Wilcox with Gannit Ankori as curatorial advisor.

Through paintings, clothes, personal objects, photographs and archival footage, the exhibit presents a textured look at Kahlo’s politics, embrace of indigenous Mexican culture and resilience in the face of one health malady after another. Here are six crucial artifacts from the exhibit that help paint a fuller picture of her personal history.

This 1920 photo of a young Kahlo at her first communion was likely taken by her father, Guillermo, a professional photographer. He and Frida shared a close relationship during her childhood on the outskirts of Mexico City: he taught her how to use a camera and she helped him in the studio. “They had a very strong dialogue about their creative impulses,” Catherine Morris, who co-organized the Brooklyn Museum exhibit alongside Lisa Small, told TIME. “He was quite daring and she definitely identified with that.”

Her relationship with her mother Matilde, a devout Catholic, was more strained. Matilde took her daughters to church every day but was met with resistance: when Kahlo and her sister were supposed to be attending a catechism class shortly before this communion photo was taken, they instead “escaped and went to eat haws, quinces and capulines in a nearby orchard,” Kahlo remembered in an interview.

As an adult, Kahlo was mostly uninterested in practicing religion. But Catholic imagery still made its way into many of her works. In self-portraits she portrayed herself as a crowned nun or a bloody Christ-like martyr with crowns of thorns. Other works, like “A Few Small Nips,” were modeled after retablos, small devotional paintings that depict suffering and are typically found in churches.

In 1925, an 18-year-old Kahlo was riding a wooden bus when it collided with a streetcar, killing several passengers and fracturing Kahlo’s ribs, both her legs and her spine. Kahlo would spend the rest of her life battling various health crises that mostly stemmed from this accident.

Her injuries forced Kahlo into tight corsets that straightened her spine. In order to conceal them, Kahlo would often wear huipils—tunics that allowed ample room to breathe. They enabled her to disguise a debilitating disability with joyful colors and materials.

But huipils were not just functional—they were also a cultural and political statement. Kahlo was a champion of Mexicanidad, the embrace of indigenous Mexican culture (that her mother’s family was a part of) above bourgeois European aesthetics and ideals. “She came to see her sartorial choices as intentionally political,” Morris said. Kahlo was especially inspired by the culture of Tehuantepec, a matriarchal city in Oaxaca where the women designed and wore huipils, ran the markets and served as breadwinners.

When Kahlo lived in Mexico City, she frequented flea markets, where she bought fabrics and employed seamstresses to turn them into dresses. She would wear these outfits, whether they were huipils or rebozos—more formal ornate shawls—even when painting, and covered herself with indigenous ornaments like jade necklaces, sashes, flowers and ribbons.

“One of the wonderful things about some of the dresses and jewelry we have is that they actually have paint on them,” Morris said.

Facts and myth intertwine in any recounting of the relationship between Frida Kahlo and Diego Rivera, two of the most famous and influential artists of their country and century. The pair married in 1929 over a shared wit, socialist bent and love for Mexicanidad. They seemed to be constantly breaking up—including a divorce in 1939—and reconciling. Both had many affairs and expressed passion and heartbreak in letters to each other that crisscrossed the globe.

While Rivera was far more famous and acclaimed at the time, he championed Kahlo’s work and helped her forge many connections in the art world that led to her eventual success. “We are all clods next to Frida. Frida is the best painter of her epoch,” Rivera is quoted as saying in Frida: A Biography of Frida Kahlo by Hayden Herrera.

Kahlo, for her part, painted Rivera many times, with varying levels of love and despair: he played the role of antagonist, lover, even infant son. In her 1943 painting Self-Portrait as a Tehuana, he appears in the center of a regal and serene self-portrait. “I think this painting is an assertion of how he remains at the core of her being in such an important way,” Morris said.

Rivera also loved when Kahlo wore Tehuana clothing, so the painting shows her wearing a Tehuana resplandor headdress—an item of clothing that Kahlo’s mother and other family members also wore before Kahlo was born. According to Morris and Small, Kahlo is wearing the resplandor the way it would be worn in a marriage ceremony—perhaps a nod to Kahlo and Rivera’s remarriage three years earlier in 1940.

Kahlo had an ambivalent relationship with New York and the United States more broadly. It was there that she met some of her most ardent artistic supporters and earned her first solo show, at the Julien Levy Gallery in 1938.

But a key tension between her and Rivera lay in their conflicting desires to live in Mexico and the United States, respectively. She was open about her disgust with the United States’ capitalist-driven inequality. “I feel a bit of rage against all these rich guys here, since I have seen thousands of people in the most terrible misery without anything to eat and with no place to sleep,” she wrote in a 1931 letter. “I find that Americans completely lack sensibility and good taste.”

Kahlo identified as a communist and showed politically radical tendencies from a young age. In high school she was a member of the Cachuchas, a political group that rebelled against rigid dress codes and agitated for school reform. “Kahlo was clearly politicized and embracing communism before she met Rivera as a young student,” Morris said.

In one set of her sketches on display at the museum, the Statue of Liberty carries a money bag and an atom bomb instead of a luminous torch, while Truman and Hitler peer out from her midsection. This vicious portrayal of the United States is echoed in other works, including “Self Portrait Along the Boarder Line Between Mexico and the United States”—in which the American flag is covered by Industrial smog—and “My Dress Hangs There,” a derisive collage of New York society in decay.

5. Frida at the Casa Azul

In 1941, Rivera moved in with Kahlo to her family home, La Casa Azul (the Blue House) in Mexico City. While her father had built the house in a European style, Kahlo and Rivera transformed it into an altar to Mexico’s past. Kahlo remodeled the kitchen with blue, white and yellow tiles to echo traditional provincial kitchens; they and their guests would drink out of clay cups and eat off earthenware plates.

The couple covered the walls and shelves with ancient Mayan artifacts, paper mache skeletons and other folk art sculptures and paintings. The house and its surrounding gardens were also filled with animals, including Mexican hairless dogs, parrots, monkeys and a deer.

Kahlo painted almost all of her work in this home studio, drawing inspiration from these many living and historical testaments to Mexican culture. After her death, the house was transformed into the Frida Kahlo Museum.

6. Corset with sickle and fetus

Kahlo was in and out of hospitals throughout her life and had dozens of surgeries. While bedridden, she would paint both on suspended canvases and on the corsets she wore to hold her spine in place.

This corset, which is itself on display at the museum, depicts two themes that dominated her thoughts: family and politics. Kahlo had several miscarriages and abortions; her frail body prevented her from giving birth. Her preoccupation and sorrow over this loss led her to depict wombs, fetuses and children in many works, including “Sun and Life” and “Girl with Death Mask.”

But the exhibit’s curators hope to challenge the pervasive trope of Kahlo as a tragic figure beset by childlessness. “She grew up in an age where she was expected to have children,” Morris said. “I think she wanted to and didn’t want to: She knew her husband had left the previous two women he was with as soon as they had children. And she was committed to her art and understood the implications it would have.”

In Kahlo’s later years, she reinvested her energies into communist activism. She began inserting flags, political inscriptions and peace doves into still lives. An unfinished portrait of Stalin sat on her easel when she died. She also imparted her ideals onto her students, whom she called “comrades.”

“I should struggle with all my strength for the little that is positive that my health allows me to do in the direction of helping the Revolution.” It was, she wrote in her diary in 1951, “the only real reason to live.”

On this corset, she drew a hammer and sickle over her heart. On July 2, 1954, Kahlo disobeyed doctor’s orders and left her bed to go to a communist demonstration. It was her last public appearance. She died 11 days later. 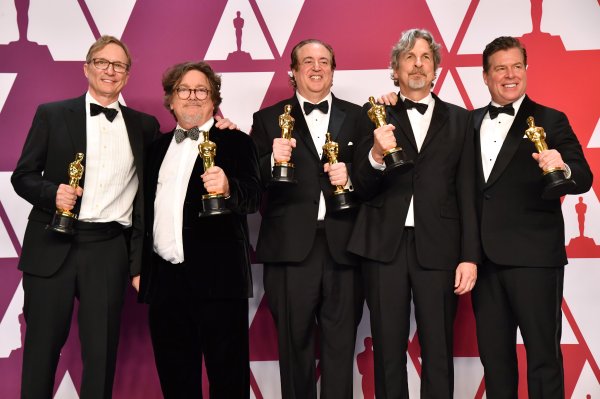 How Green Book Fits Into the Oscars' Complicated History With Movies About Race
Next Up: Editor's Pick