So of course James Corden decided to take them all down a notch in a clever spoof on the ad, splicing himself into footage of their retro-feeling commercial in a piece for his Late Late Show that he is, appropriately enough, calling “#MyCordens.”

The commercial shows Mendes, for instance, chowing down on a bowl of cereal in a hotel-like environment with slatted shades — so next thing, Corden (wearing a big, fluffy robe over, one presumes, his Calvins) is complaining about the empty cereal box in what appears to be the same room.

Meanwhile, Jenner is hiding in the bathroom, so Corden can’t help but knock on the door when he needs to use it. “Kendall, you grew up with like nine sisters. You know how sharing a bathroom works,” he insists, with his bathroom caddy in hand.

And A$AP Rocky is sunbathing and singing on the roof, which does not go down well with Corden. “A$AP, get off the roof! It isn’t safe!” he insists. Looks like Corden has positioned himself as the house dad. As for Centineo? Since the actor made a point to hit a casual dab while exiting a room, Corden makes sure to copy the move on his own.

But Corden may not be quite hip enough or young enough to join in on their fun in the end. Watch his parody above to see how it turns out. 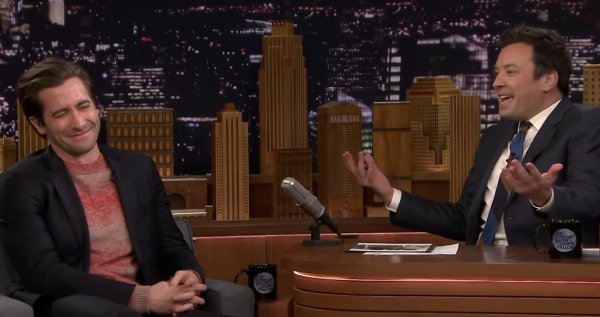 Jake Gyllenhaal Expressing His Heartfelt Appreciation for Tom Holland Is Their Latest Bromance Development
Next Up: Editor's Pick