Adam McKay was not supposed to be a political commentator. He rose to fame writing and directing so-dumb-they’re-smart Will Ferrell vehicles like Anchorman and Step Brothers—absurdist comedies built for frat-house immortality. But as the Obama era wound down and the consequences of the late-2000s Wall Street crash came into focus, movies about fictional idiots started to feel frivolous to McKay. He reinvented himself with 2015’s The Big Short, a Best Adapted Screenplay winner that uses black humor to explain the subprime crisis in bro-friendly terms; in one scene, Margot Robbie defines finance jargon from a bubble bath. His next film, Vice, the gonzo Dick Cheney biopic that divided critics last year, is up for eight Oscars.

Just two months after that movie hit theaters, McKay returns to the intersection of money and politics with This Giant Beast That Is the Global Economy, an eight-episode docuseries coming to Amazon Prime on Feb. 22. As its irritating title suggests, the show is the director’s laudable attempt to demystify global capitalism and its discontents. Lively host Kal Penn (Harold & Kumar, Designated Survivor) traverses the world, investigating a different topic in each episode. Cyprus is the picturesque backdrop for a tutorial in one of the nation’s specialties: money laundering. A deep dive into the catastrophic threat of a rubber shortage takes Penn to a Thai plantation, where he learns why growing the raw material has become financially unsustainable.

When concepts get tough, McKay reverts to The Big Short’s celebrity-splaining approach. Some of these segments work great: Comedian Joel McHale makes the perfect pitchman in a faux ad for cash-only businesses; it’s fun to see SNL alum Sasheer Zamata play a deadpan hostess in a sketch that smartly uses chain restaurants to explicate rent-seeking. But just as often, these scenes are grating. An object lesson in externalities that finds a short-sighted Bobby Moynihan character hosting an early-2000s yard sale gets old long before its cringey kicker: “New Orleans in 2005, what could go wrong?” Surely there’s a way to understand futures without having to hear Meghan Trainor, of “All About That Bass” fame, brag about selling out concerts.

Despite the absence of hot girls in bathtubs—a tiny relief outweighed by the dispiriting dearth of women experts in the interview segments—Giant Beast panders to McKay’s liberal-bro base just as gleefully as the rest of his filmography. At one point, Penn names a shell company “69 Brothers.” A muddled episode that aims to uncover why rich people so often seem like, as a self-censoring title card puts it, “d*cks” begins with the host vowing to say the mildly naughty word as many times as possible and ends with a dull, inexplicably lengthy tour of a sex-toy factory. This stuff isn’t necessarily offensive; it’s just too stupid to be funny to any sober person over age 22.

There’s a fine line between keeping your viewers entertained and condescending to them, and like most of the well-intentioned projects that constitute McKay’s second act (with the notable exception of Succession, the great HBO media-dynasty dramedy that he executive produces and has directed but didn’t create), Giant Beast too often ends up on the wrong side of it. That’s doubly disappointing because the real-world problems he’s spotlighting are so pressing, and so few filmmakers with his reach seem interested in tackling them. McKay seems to think that the best way to make these issues palatable is to dumb them down and raunch them up to such an extent that they could even hold a Ferrell character’s attention. The only trouble is that by embracing this particular audience, he’s bound to alienate many others. 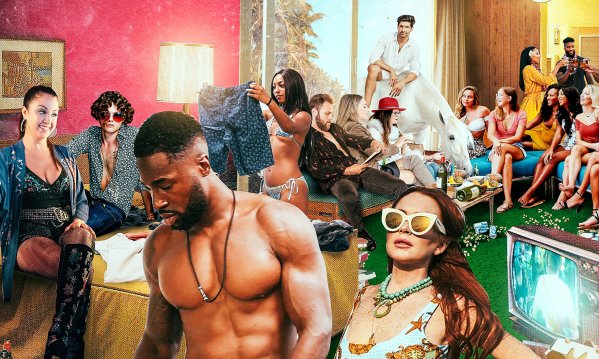 Trashy Reality TV Is Back. How Lindsay Lohan, Temptation Island and Netflix Made It Better Than Ever
Next Up: Editor's Pick