Protestors shout slogans and hold signs during the State of the Union protest at 7th Street and the 110 Freeway overpass in downtown Los Angeles, California on February 5, 2019.
Apu Gomes—AFP/Getty Images
By Katy Steinmetz

There has always been friction between the federal government and the wildly divergent states it represents. Though the national government is the 800-pound gorilla in the room, it still depends on states, and the power of those smaller governments is enshrined in the Constitution. When Obama was in the White House, no other state pushed back like Texas, which sued his administration at least 48 times. And since President Donald Trump took office, no other state has resisted his administration as reliably as California.

The latest example came on Monday, when California and a coalition of 15 other states sued to stop Trump’s use of emergency powers to build a border wall. It followed a promise that Democratic Gov. Gavin Newsom made in his first state of the state speech the week before. Trump, he said, was manufacturing a crisis at the border in order to pursue a “vision of an America fundamentally at odds with California values,” and the state would not be part of it.

Here are six examples of the Golden State defying Trump over the past two years.

Suing Trump over the “emergency” at the border

It was hardly a surprise that California led the charge in suing Trump over his attempt to redirect billions of dollars toward building a wall on the U.S.-Mexico border. Trump himself anticipated that his move would be blocked by the Ninth Circuit Court of Appeals, one that covers California and has been criticized by conservatives as a liberal outlier. (Trump also suggested that his administration would appeal such a ruling to the Supreme Court.)

California is a predictable foil to Trump because it is among America’s most progressive states — there’s not a Republican to be found in statewide office. It is also a place that prides itself on having a diverse population and immigrant-friendly policies. While whites remain the largest ethnic group in America overall, Latinos became the largest ethnic group in California in 2014, and now make up nearly 40% of the state’s population.

Moving troops away from Mexico

In his State of the Union speech on Feb. 6, Trump said that he had ordered 3,750 troops to America’s Southern border to deal with a “tremendous onslaught” of migrants heading to the United States. On Feb. 11, Newsom responded by announcing that he was withdrawing hundreds of troops from California’s border with Mexico in order to deal with what he characterized as “real threats” throughout the state.

At the request of the federal government, California had previously deployed 360 troops to assist with border operations. Newsom directed some of those troops to instead work on fire prevention throughout the state, and others to target illegal marijuana farms. Others would remain at the border but would be focused on stopping the passage of drugs and guns through existing checkpoints rather than stopping migrants who might be seeking asylum.

Until this January, California was helmed by Democrat Jerry Brown, a longtime politician who had become a global leader on climate change by the end of his last term as governor. When Trump exited the landmark Paris Accord on climate change in 2017, Brown described it as a “crazy decision” that was “against science” and “against reality.” More concretely, he helped launch a coalition of cities, states and businesses that remained dedicated to reaching the goals outlined in that agreement, part of what Brown described as a “countermovement.”

Before he left office, Brown gathered leaders from around the world in San Francisco for a major forum on the issue last year. In his opening remarks, he said that Trump would be remembered as a “fool” for championing pursuits like coal mining at a time when scientists are warning that climate change is an “urgent and potentially irreversible threat.” He also signed an executive order laying out the ambitious goal of making the state “carbon neutral” by 2045.

California, a place where composting is common and plastic bags are banned statewide, was never going to sit by as the federal government rolled back environmental protections. While Brown spoke out on climate change and sought greener goals for the state, California Attorney General Xavier Becerra, who remains in office, was busy suing the Trump Administration for actions like relaxing pollution standards and repealing fracking regulations.

In took Texas eight years to sue the Obama Administration 48 times. According to a count done by the Los Angeles Times last year, California took only a year and a half to sue the Trump Administration on 38 occasions. And more than 20 of those suits relate to environmental issues. That may be why the paper once dubbed Becerra the “nemesis” of Andrew Wheeler, the coal lobbyist that Trump made acting chief of the EPA in 2018.

During his campaign, Trump promised to withhold federal funds from so-called “sanctuary cities,” which limit cooperation with federal immigration authorities. And his administration acted on that promise in March 2017. While jurisdictions like San Francisco argued in court that the move was unconstitutional, state legislators responded in even more dramatic fashion: by moving to make the entirety of California a “sanctuary state.”

According to some estimates, California is home to more undocumented immigrants than any other state, upwards of 2 million. The bill, which became law in 2017 and went into effect last year, restrains the ways in which local and state officials can assist federal authorities who might seek to detain or deport such individuals. (Read more on the details of S.B. 54 here.) The Trump Administration, in turn, sued California over the law, but a judge dismissed the claim in July.

California is the nation’s most populous state, home to nearly 40 million people, about one in eight Americans. And while Trump has many supporters there, particularly in more rural inland counties, the majority of the Golden State’s residents lean to the left. That is part of the reason that California has become fodder for riling up conservatives in other parts of the country, with politicians using the word to conjure fears of progressivism gone wild.

That’s a description that the state’s more liberal residents might happily put on protest signs. Since Trump was elected, hundreds of thousands of them have shown up to protest his policies and actions at events dedicated to immigrant rights, women’s rights and LGBT rights. “The vast majority of people who are your neighbors and the people who you work with do not like Donald Trump,” a protest leader in San Diego said into a megaphone on the day of Trump’s inauguration, as observed by a TIME reporter. “What we have to do is galvanize and unify that energy and organize ourselves against everything on his agenda.” 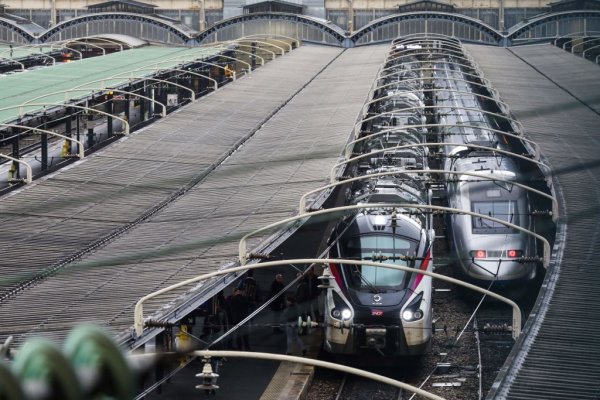