Americans Want a Less Aggressive Foreign Policy. It's Time Lawmakers Listened to Them

Demonstrators take part in a protest against the U.S. bombing of Syria in front of the White House on Apr. 14, 2018 in Washington, DC
Mandel Ngan—AFP/Getty Images
By Ian Bremmer

For decades, American foreign policy has rested on a consensus view about the United States’ role in the world. In an international order where there is one unrivaled superpower, foreign policy experts agree that U.S. soldiers and taxpayer dollars are essential for preserving global stability. But that is an assumption that is not necessarily shared by the American public, based on the findings of a new study Worlds Apart: U.S. Foreign Policy and American Public Opinion, conducted by the Eurasia Group Foundation (EGF), an organization I serve as Board President.

No matter what party they claim allegiance to, Americans favor a foreign policy that resists entanglements abroad, the survey found—and it’s not limited to conservative libertarians on the right and liberal pacifists on the left. In every age group polled, respondents exhibited a waning appetite for the obligations and impositions of imperial governance.

This isn’t the first time these findings have cropped up. Americans have been skeptical of overseas interventions for decades now. But this study provides the clearest picture yet of how Americans view the world at a moment when U.S. President Donald Trump is taking an unprecedented approach to foreign policy, and the fault lines of American politics are being redrawn.

For all the (entirely fair) criticism of his chaotic and abrasive decision-making, Trump understands this wariness. Some insist he has hijacked U.S. foreign policy by expressing public doubt about the value of existing alliances and an interventionist foreign policy. But in many ways Trump’s views align more closely than others in Washington D.C. with the ways in which a majority of American taxpayers would define the future U.S. role in the world. America First isn’t just a Trump catchphrase. When it comes to foreign policy, it’s becoming a national worldview.

Ever since the Cold War, U.S. policymakers have broadly agreed that two World Wars and the struggle with expansionist Soviet communism offered indisputable proof that American leadership is both good for the world and for U.S. national security. It gives Washington the tools to exert power “over there” to prevent foreign problems from reaching American shores.

Yet for all the talk of leadership, Washington policymakers have failed to convince Americans they should bear the cost of exercising it abroad. After the attacks of Sept.11, 2001, and the inconclusive military interventions in Afghanistan, Iraq, Libya and elsewhere that followed, the American public is less convinced than ever that it is the U.S.’s responsibility to guarantee global security and prosperity in the 21st century. Asked how best to achieve peace, over one third of respondents to the EGF study said the U.S. should “focus on domestic needs and the health of American democracy.” Just 18% said the best route was by promoting and defending democracy around the world.

Americans have not stopped believing the country is exceptional. Rather, as the report’s author Mark Hannah observes, “support for American exceptionalism and leadership is linked to the power of America’s example, and is not necessarily indicative of support for active intervention in global affairs.” Americans believe exceptionalism is better expressed by the power of what the U.S. does at home, rather than by a project to remake the world in America’s image. Almost half of the survey’s respondents believe “America is exceptional because of what it represents.” Only 17% said that “America is exceptional because of what it has done for the world.”

I think this in part the case because Americans have come to accept that, globally, democracy has not carried the day. They see other countries, like China and Saudi Arabia, achieving remarkable economic success without following the U.S. free-market model. They also see from those countries that personal freedom and rule of law are far from universal values. They believe the United States can promote these values more effectively by realizing their highest forms at home, rather than selling or imposing them abroad.

On the use of force, respondents could fairly be described as “reluctant” and “risk-averse.” Asked how the U.S. should respond if “Iran gets back on track with its nuclear weapons program,” there was a bipartisan preference for diplomacy over military action. Eighty percent of respondents preferred diplomatic options for trying to maintain a non-nuclear Iran. Significantly more people believed “Iran has the right to defend itself even if it means developing nuclear weapons” than supported a “preemptive strike on Iran to prevent its government from acquiring nuclear weapons.”

What Americans perceive to be the cost of military action hasn’t helped. Although 45% of respondents argued for current levels of military spending to be maintained, among the remaining respondents more than twice as many thought we should decrease spending rather than increase it. The most popular rationale for lower spending, the survey found, was that the U.S. “has other priorities on which it could be spending this money.” Nearly 60% chose that as their primary rationale, while 28% said they were most concerned that the current “level of military spending is fiscally irresponsible — reducing military spending could help us pay down the national debt or reduce taxes Americans must pay.”

Crucially, the survey did not find that Americans want to withdraw from the world. Support for international trade, for example, is significant. In fact, approximately a third of respondents [30%] believe that “establishing, encouraging, and reinforcing global economic integration, as well as the growth of free trade” is the best way of achieving and sustaining peace. But the survey suggests that a plurality of respondents align themselves with what the report calls an “Independent America” worldview—an America that declares independence from the responsibility to solve other people’s problems.

The contrast between public and expert opinion is stark. The EGF report analyzed writing by a random sample of 45 foreign policy experts, published over three years in Foreign Affairs, one of America’s foremost journals on international relations. The views expressed by these experts are inversely related to the findings on U.S. public opinion. Just 9% aligned with an “Independent America” worldview. Instead, almost half (47%) saw America as “Indispensable” — i.e., that there can be no international peace and prosperity without active U.S. leadership. Among the public, just 9.5% shared support for that idea.

The cost of ignoring public opinion

The United States is a representative, not a direct, democracy. Americans don’t expect their leaders to base every decision strictly on the opinions of their constituents. They’re elected to think for themselves—and for the nation. They have an opportunity, even a responsibility, to help shape public opinion. This is especially true on questions of foreign policy, where wise choices depend on highly specialized knowledge.

But within a democracy, policymakers must also allow their constituents to help shape their choices. That’s especially true when the U.S. foreign policy establishment continues to be wedded to its view of American exceptionalism at a time of profound change in the world order. The Pax Americana era is over — and when reality changes, so must the perspective of those who influence and make decisions.

I would argue that U.S. policymakers have an opportunity here — to re-engage with their constituents, at a time when the American public’s outlook appears better-suited to the fraught geopolitical realities of the current moment.

Failing to do so brings great risks. When policymakers ignore public opinion—and its sustainability—they leave citizens to accept costs and hazards that can’t be maintained over time while simultaneously eroding their trust. Furthermore, when foreign policy is pursued without significant public support, foreign governments perceive the United States as a less dependable and predictable partner; foreign enemies see potential divisions to be exploited. And without consideration of public opinion we’re bound to see fewer fresh policy ideas. As the report points out, “intelligent and thoughtful proposals to decrease defense spending or reevaluate the War on Terror are dismissed as outside the boundaries of conventional wisdom.”

The result of this myopic view of foreign policy possibilities can be costly—in blood, treasure, and international political good will. But the larger cost of ignoring U.S. public opinion in favor of an elite consensus that lacks sustainable public backing may well be to American democracy.

Ian Bremmer is founder and board president of EGF, a nonpartisan nonprofit dedicated to creating a world where citizens understand the complexities of geopolitics that affect their daily lives. 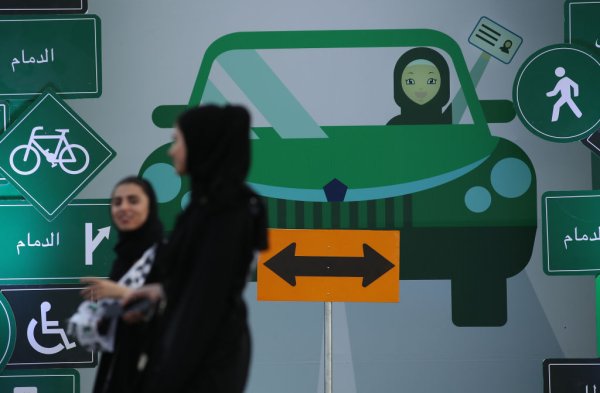 What to Know About Saudi Arabia's 'Woman-Tracking' App
Next Up: Editor's Pick