In an interview with 60 Minutes scheduled to air on Sunday, McCabe confirmed that Rosenstein was “counting votes or possible votes” to determine the whether the Amendment could be invoked. Under the fourth section of the Amendment, a President can be removed by the Vice President and the cabinet members if they find that the President is “unable to discharge the powers and duties of his office.”

“Discussion of the 25th Amendment was simply – Rod raised the issue and discussed it with me in the context of thinking about how many other cabinet officials might support such an effort,” Rosenstein said in the interview.

He added, “The deputy attorney general was definitely very concerned about the president, about his capacity and about his intent, at that point in time.”

McCabe’s spokesperson, Melissa Schwartz, appeared to walk back some of McCabe’s comments in a statement release on Twitter on Friday. She wrote that McCabe’s statements had been taken “out of context and misrepresented.”

After learning of the comments, South Carolina Sen. Lindsey Graham promised to hold a hearing to determine if Rosenstein was trying to conduct an “administrative coup” to remove the president.

“We’re a democracy. People who enforce the law can’t take it into their own hands. And was this a bureaucratic coup? I don’t know,” Graham said on the CBS show Face the Nation.

McCabe isn’t the first to suggest that officials government officials have talked about the potential the Amendment could be invoked. An op-ed by an unnamed Trump administrative official published in the New York Times last September suggested that there had been “whispers” in the Cabinet about invoking the Amendment. TheTimes later reported that Rosenstein had suggested wearing a wire during meetings with Trump.

On Thursday, however, Vice President Mike Pence said that suggestions that the 25th Amendment would be invoked to remove Trump are “absurd.”

“I’ve never heard any discussion of the 25th Amendment by members of the government and I would never expect to,” Pence said.

Watch the clip of the McCabe 60 Minutes interview below: 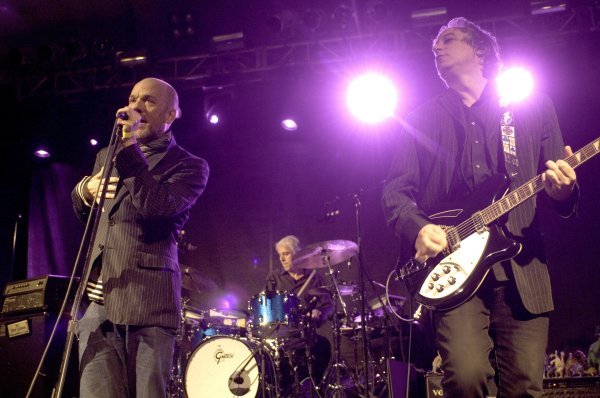 R.E.M. Takes on Trump for Using 'Everybody Hurts'
Next Up: Editor's Pick