'You Can't Push the Land Too Hard.' How Mapping the Grand Canyon Shaped a Vision of Climate Trouble to Come

A view of the Grand Canyon just after sunset from the South Rim on Feb. 8, 2019, in Grand Canyon National Park in Arizona.
George Rose—Getty Images
By Olivia B. Waxman

It’s been a century since Congress passed the act that designated the Grand Canyon in Arizona as a national park. But the centennial of that Feb. 26, 1919, law is in some ways a bittersweet anniversary: given the worsening effects of climate change, celebrations of the park’s past are joined by serious discussions about its future and preserving it — and the wildlife that calls it home — for another hundred years and more.

But while such concerns may be relatively new in the history of the land itself, they’ve always been part of the conversation about the canyon’s place in the America’s public lands.

In fact, John Wesley Powell, the man best known for leading a groundbreaking 1869 journey down the Colorado River that explored the Grand Canyon and for being the first to officially map and survey it, also led efforts to encourage thinking on the sustainable development of lands in the western United States. TIME spoke to John F. Ross, the author of the recent book The Promise of the Grand Canyon: John Wesley Powell’s Perilous Journey and His Vision for the American West about what Powell foresaw when he traveled the Canyon.

What should we know about John Wesley Powell?

He had the idea to go down the Colorado river through the Grand Canyon, so he was the first person to do that right after the Civil War. The last piece of unexplored continental America was this 100-mi.-by-300-mi. section in the southwest on the Colorado plateau that includes the Grand Canyon.

He was one of America’s foremost scientists. He was a major force in the U.S. Geological Survey and was in on starting the National Geographic Society. Even more importantly, he became one of the first advocates of sustainability. He was fundamental in establishing the science of anthropology and ethnology in America. He established the bureau of ethnology at the Smithsonian, and started the first comprehensive study of native indigenous populations in the world, studying indigenous languages. You don’t get a lot of explorers who go on to become visionaries who found federal bureaucracy science.

How did he get interested in the Grand Canyon?

In 1867-1868, he was a college professor who took kids from Illinois colleges out West, to Colorado, up into the Upper Rockies, to collect all this stuff for institutions in the East who were eager for grizzly-bear hides, pressed-flower specimens, dried birds and Indian pots. He met all of these rugged mountain men who were talking about this canyon and this river, then he decided that’s what he really wanted to go see. In 1869, the transcontinental railroad was finished, and part of the last section of it crossed on a trestle bridge over the Green River, which turns into the Colorado River and goes to the Grand Canyon, and he realized this was his chance; he could bring boats that were built back East and drop them right off the river bank and go down to the Grand Canyon.

What was going on in the world at that moment that motivated him to make that journey to the Grand Canyon?

Right after the Civil War, everyone dropped their rifles and started thinking about the West. What was the West? There were no John Ford movies. There was a sense of great, unlimited opportunity for this country. America was thinking its next step forward and looking to find new heroes and still looking for its identity.

It’s one of the most incredible exploration stories in American history. He took these small wooden row boats down the river, and the whitewater was so awful. The trip took three months; on the last day, three men figured they were better off going into the desert. No one found them. They died. On a second trip through the Grand Canyon, Powell, who had lost his right forearm in the Battle of Shiloh, had to be tied down to the boat with a rope to get him through some of the rapids.

How has the Grand Canyon’s landscape evolved since Powell saw it?

It pretty much looks like what he saw, but there is more vegetation around it on the banks. Back-up from the Hoover dam has flooded some of the area Powell went through. He was in favor of some dams diverting water here and there, but I’m certain he would have been horrified about their environmental effects. These big dams fought against all he was talking about, in terms of listening to the land.

In your book, you write about how he was ahead of his time in terms of thinking about how the future of living in the climate of the American West. What would he say about the drought, wildfires and water issues we see in the West today?

He foresaw drought, wildfires and litigation over water rights. [He] talked about having watershed commonwealths, dealing with legal issues about who owned water — as the Colorado River goes through multiple states, who owns it?

At the 1877 annual meeting of the National Academy of Sciences, he unrolled a map that drew a line in the sand between the dry west and verdant east. Then he started writing important government reports and talking to the public about what did that mean in terms of how we would go about things. I’d argue it was as significant and as stunning as the change that was brought in the 1960s, when astronauts sent home those pictures of the Earth as that fragile globe. Now, the fastest growing cities in the country are in the southwest urban areas, and they have virtually no plans looking forward strategically on where they’re going to get their water.

Is it fair to say he was ahead of his time in raising awareness about climate change?

This is something Americans at the time didn’t want to hear about and, in a large part today, we don’t want to hear about it. The same arguments from railroad barons and western Senators — “You’re in the way of success, standing in path of progress” — you hear today. He was saying, here’s what we can expect and let’s then develop the land according to what that is. He was saying you can’t push the land too hard. Listen to the land. 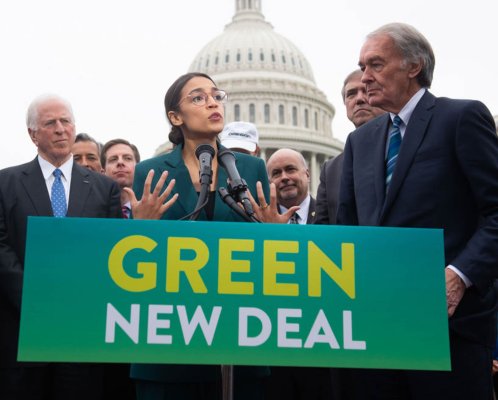 How FDR’s New Deal Laid the Groundwork for the Green New Deal—in Good Ways and Bad
Next Up: Editor's Pick