Trump Repeated Many of His Old Claims About the Border to Justify the State of Emergency. Here Are the Facts

By Gina Martinez and Abigail Abrams

As President Donald Trump declared a state of emergency Friday, he made a number of claims about the number amount of drugs and crime around the southern border and the need for his wall.

Many of these were similar to arguments he has used in the past as he attempted to persuade the public and members of Congress about the need for a wall along the U.S.-Mexico border. But not everything he said was accurate.

Here are the facts behind three of his big claims.

Trump has repeatedly claimed undocumented immigrants bring crime to the United States. He did this again on Friday.

“We’re talking about an invasion of our country with drugs, with human traffickers, with all types of criminals and gangs,” Trump said during his speech declaring a national emergency.

There are instances of crimes being committed by people who are in the U.S. illegally. Trump highlighted this issue by pointing out “angel moms” — grieving relatives of people who were killed by undocumented immigrants — during his speech.

But research suggests that immigrants actually commit crimes less frequently than American-born citizens, and that illegal immigration does not lead to more violent crime.

One study published last March in the journal Criminology looked at whether increasing illegal immigration over the last three decades caused an increase in violent crime. The answer was no. In fact, the researchers found that states with higher shares of undocumented immigrants generally had lower crime rates than those with smaller shares of immigrants.

Claim: Immigrants are crossing the border in historically high numbers

Trump also said that the strong economy has attracted a record level of immigrants to cross the border illegally.

“We have far more people trying to get into our country today than probably we’ve ever had before. And we’ve done an incredible job in stopping them. But it’s a massive number of people,” Trump said on Friday.

The number of people crossing the border illegally has actually been declining in recent years. While more people were caught at the U.S.-Mexico border in 2018 than in 2017, these numbers are still far lower than they were in the mid-2000s, as TIME has previously noted.

However, the number of migrant families crossing the border has increased. In the early 2000s, most migrants were men coming from Mexico to find higher paying jobs. But in 2017, for example, just 42% of migrants stopped at the border were from Mexico, and more than 107,000 “family units” were caught.

Claim: Most drugs don’t come through legal points of entry

During his speech, the President also spoke about drugs. He called assertions that most drugs that cross the U.S.-Mexico border come in through legal points of entry and that a wall wouldn’t stop the flow of illegal drugs “all a lie.” However, statistics from Trump’s own government contradict Trump’s claim.

“We have tremendous amounts of drugs flowing into our country,” Trump said. “Much of it coming from the southern border, when you look and when you listen to politicians, particularly certain Democrats, they say ‘It all comes through the ports of entry.’ Wrong, it’s wrong. It’s just a lie. It’s all a lie. They say, ‘Walls don’t work.’ Walls work 100%.”

According to the DEA’s 2018 Drug Threat Assessment, the majority of drugs coming in illegally over the southern border are coming in through ports of entry.

“A small percentage of all heroin seized by [Customs and Border Protection agents] along the land border was between Ports of Entry,” the DEA reported.

“The majority of the [heroin] flow is through [private vehicles] entering the United States at legal ports of entry, followed by tractor-trailers, where the heroin is co-mingled with legal goods.”

Earlier this week, one of Mexico’s most infamous drug-lords, “El Chapo”, was convicted on drug-trafficking charges in New York City.

Prosecutors allege that Joaquin “El Chapo” Guzman made his fortune by creatively smuggling drugs at multiple legal points of entry using a wide range of transportation modes––including submarines, planes, tractor trailers and trains––that would not have been thwarted by a border wall.

According to prosecutors, El Chapo smuggled hundreds of millions of dollars worth of cocaine across the U.S. Mexican border by hiding drugs in jalapeño pepper cans.

Write to Gina Martinez at gina.martinez@time.com and Abigail Abrams at abigail.abrams@time.com. 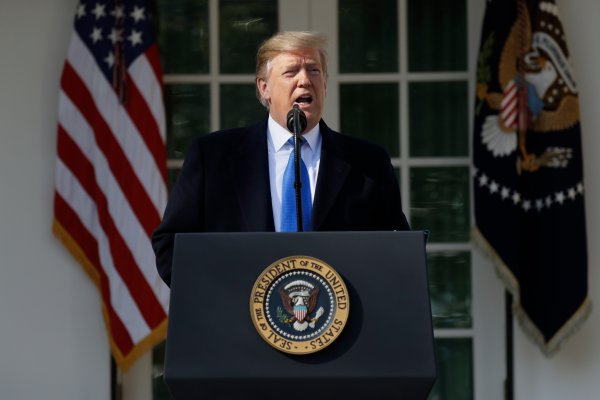