Ben Affleck is officially retiring as the Batman. The actor stopped by Jimmy Kimmel Live! on Thursday to bid farewell to the caped crusader—and Matt Damon’s thong.

Affleck explained to Jimmy Kimmel that he was hanging up the mask, because he couldn’t figure out the next film for the famed DC Comics character. “I tried to direct a version of [Batman], [I] worked with a really good screenwriter, but kinda just couldn’t come up with a version. Couldn’t crack it,” Affleck told Kimmel. “I thought it was time for someone else to take a shot at it. And they’ve got some really good people.” In January, the Oscar-winning actor confirmed he was leaving the beloved franchise, tweeting that he was “excited” to see the next iteration of the iconic character in the film The Batman, which will be directed by Matt Reeves.

In an interview with The Hollywood Reporter, Reeves said that the new younger version of Bruce Wayne and The Batman would be “a point of view-driven, noir Batman tale” featuring more of “Batman in his detective mode.”

To help Affleck say goodbye to the Dark Knight, Kimmel helped him “officially retire” Affleck’s Batsuit in a special ceremony that happens “whenever the Bat torch is passed.” Kimmel’s long-time sidekick Guillermo Rodriguez, appeared on stage dressed as Batman’s longtime sidekick, Robin, although Guillermo’s version was called “Robert.” Then Affleck’s Batsuit was raised to the studio’s rafters, where it replaced another bit of Hollywood memorabilia, Matt Damon’s thong from Behind the Candelabra.

Reeves’ take on The Batman is expected to hit theaters in summer 2021. 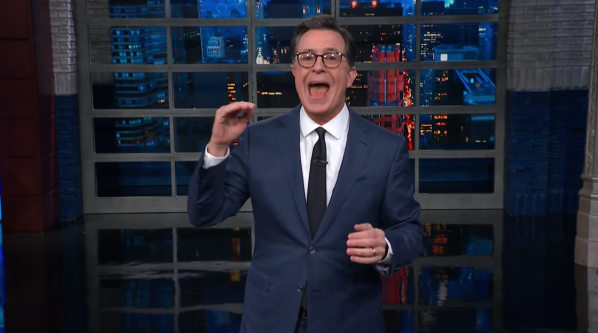 Stephen Colbert Is Not Impressed With Government in 2019
Next Up: Editor's Pick