REVIEW: Joe Reminds Us That Nicolas Cage Is a National Treasure

Joe Ransom (Nicolas Cage) runs an illegal tree-poisoning operation for a company that plans to fill the land with healthier, more profitable saplings. Most of his employees are bottom-of-the-working-class, but one is Gary Jones (Tye Sheridan), the 15-year-old son of the abusive, alcoholic Wade (Gary Poulter). Joe, an ex-con who medicates his hard life and bad dreams with booze, cigarettes and whores, is an essentially moral person: a pillar of his community, respected by the shopkeepers and indulged by the local sheriff. When he becomes the father figure Gary never had, Wade takes savage objection.

Oh, the twisted roads that Cage and director David Gordon Green took to get to Joe. Green, a graduate of the North Carolina School of the Arts, made the tender, acute pre-teen drama George Washington when he was 24 and carved an artful indie niche with All the Right Girls, Undertow and Snow Angels. He then joined his former UNCSA classmate Danny McBride for a spell of gross-out Hollywood comedy, directing McBride in Pineapple Express, Your Highness and the HBO series Eastbound and Down. Now he’s returned to grim, sensitive indieland with this adaptation, written by Gary Hawkins, of Larry Brown’s 1991 novel by the same name.

Cage’s trip from indie to mainstream and back again is better known — we might say notorious. After three early movies (Rumble Fish, The Cotton Club, Peggy Sue Got Married) for his uncle Francis Ford Coppola, he brought his mopey, explosive verve to such sweet eccentricities as the Coen brothers’ Raising Arizona and David Lynch’s Wild at Heart. His work as a suicidal alcoholic in Leaving Las Vegas earned him an Oscar in 1996, and the same year he found a parallel career as a action star in Jerry Bruckheimer’s The Rock.

Since then Cage has alternated Bruckheimer blockbusters (Con Air, Gone in Sixty Seconds, the National Treasure tandem, The Sorcerer’s Apprentice) with more urgent work in small films like Kick-Ass and Werner Herzog’s Bad Lieutenant remake. At 50, he’s still got the weirdest and most watchable acting style of any star whose movies have grossed nearly $5 billion worldwide. “I don’t believe in the term ‘over the top,’” Cage told Lee Cowan in a CBS News Sunday Morning profile this week. “I believe in the term ‘outside of the box.’ Let’s take chances, let’s keep trying new things, and that’s how you reinvent yourself. And that’s how you stay fresh.”

He also needs a sympathetic milieu, director and character, and found all of them here. His Joe motors and flails through a part of America that never emerged from the recent recession — or maybe from the Great Depression. Everyone is exhausted from brutal work or from trying to find it. In the first bloom of morning, they trudge as if they’ve been up all night with a sick relative. And for some, weariness has festered into malice. Gary’s dad Wade, who calls himself G-Dawg, is a wily, vengeful coot with a gift for bringing tragedy to a sad town.

Shooting near Austin, Texas, Green cast non-actors in most of the supporting roles. Poulter, who lends Wade a surly charisma, was a homeless man who died not long after his one movie. By that standard, the young Sheridan is an old pro: three movies by his 17th birthday. He had similar roles as Brad Pitt’s middle son in The Tree of Life and Matthew McConaughey’s adoring avatar in Mud. A gifted, unaffected performer, he’s always playing decent kids who try to connect with men undeserving of being his dad.

But the movie belongs to Cage, in a performance that recalls why he is fitfully acknowledged as one of cinema’s most powerful and subtle actors. His eyes reflect the haunt of past crimes in Joe; his torso — large, muscular, tattooed and somehow spent — shows the wear of life on a complicated soul. Like Green, Cage has gone outside the box and back to basics, for a well-drawn character study that, like Joe’s bad dreams, is memorable and haunting. 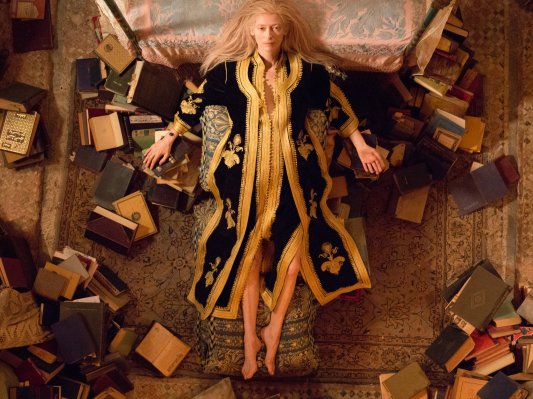 REVIEW: Only Lovers Left Alive
Next Up: Editor's Pick